I was given the pleasure of being able to do a Q&A with Yonaka, a British rock band, who are currently about to embark on a tour around the UK. As a fan of their music, I was excited to see how the band would response to my questions. I have seen the band perform live twice, owning the stage, with their powerful beats and meaningful lyrics.

Since listening to their earlier songs, back in 2016/17, I have seen the band grow in popularity, now hitting nearly 556,000 monthly listeners on Spotify. In May, this year, they released their album ‘Don’t Wait ‘Till Tomorrow’ featuring songs Rockstar and Punch bag, two fan favourites. For those of you who haven’t listened to their music, I would highly recommend it. The music which Yonaka produces can match any mood you may be feeling – whether you want to express anger or feel empowered.

Back to the Q&A, there is a mix of questions that I wanted to ask. Some may be seen as ‘typical’ questions to ask a band, however I feel that these are sometimes necessary in order for new audiences to understand the band on a deeper level.

Where does the name Yonaka come from – does it have a meaning behind it?

Theresa replied to be by explaining that ‘it is a Japanese word meaning “The Dead of Night” “Midnight”’. For her, she believed it was ‘a nice dark twist on the music I wanted to make.’

As individuals, did you always know your careers would entail music?

Theresa explained that music was involved in all of the band member’s lives. For her, she stated that she ‘was always dancing, acting and singing – and music was where my [her] heart felt strongest’. Alex, who plays bass in the band, had acting roles when he was younger and fell in love with music, as well as producing. George, who plays the guitar, played ice hockey before he fell for music. Last, but not least, Rob, who is on drums, always had music as his first choice.

Describe your sound in three words.

What is your favourite song to perform live?

I talk on the behalf of the boys here too! Punchbag is our favourite song to play live.

What do you feel distinguishes Yonaka from other bands?

The sound and the lyrics, it’s a mash up of rock, hip hop, electro, pop. Theresa admitted that she wasn’t sure where the band ‘fitted’. She also stated that ‘the lyrics are all very honest and talk about mental health and sticking up for yourself’.

What comes first: music or lyrics?

For someone who does not write songs, I was not sure what the answer would be here. Theresa said that ‘it changes all the time’. It may stem from a ‘melody or sometimes a beat or just a random cool sound’.

How did you to come to form the band?

Theresa explained that the four members met each other at university, in Brighton. However, they were ‘friends for about four years before the band started’. For me, the band feels like a genuine group of friends who thrive off each other’s talents and their shared love for music.

What’s the hardest thing about touring?

Being super close and stuck in a van with each other with no privacy.

Do you prefer performing at concerts, with a more intimate vibe, or at larger crowds at festivals?

As I thought, Theresa said that the band will always prefer playing to their own crowd at their own shows ‘because they are so so special!’. However, they love all shows! For the band, festivals feel like a ‘surprise as you never know what you are going to get’, in terms of crowd and interaction.

What is your favourite festival that you have played at?

Who do you get inspiration from, musically?

How has Yonaka developed since the earlier days, the time of ‘Ignorance’ and ‘Wouldn’t Wanna Be Ya’ compared to ‘Rockstar’ and ‘Punch bag’?

Theresa said that the band have ‘grown and got better at their art’. As a band, they now produce all their own music. Through this journey, the band have become ‘better writers’ and have gained a ‘better understanding of sounds – what sort of sound we want to make’.

As a band, do you feel responsible to talk about important societal issues such as mental health and climate change?

Theresa, speaking on behalf of the band, believes that ‘it’s important to use your platform to say something good, about what’s going on in the world, how you are feeling and things that can help your fans’

If you have ever received ‘trolling’ online, how do you handle it?

The band has received trolling – Theresa admitted that ‘the first time it happens, you are hurt because you know it isn’t nice’. However, she says you must remember that you do not ‘know the little f****r behind the keyboard’. So, you have ‘to laugh at them, ignore it and to not waste energy on some little troll, as they don’t deserve it’.

As you are in the public eye, do you limit what you say / do / wear, in the fear of receiving judgement or do you not care what people say?

Not a chance. Theresa stated that she ‘used to be way more timid’ when she was younger, which made her feel very aware of ‘what people would think and say’. But she doesn’t see why anyone else should have a say on what I want to say, do or wear. ‘It’s my life, no one else’s – you only get one life, don’t waste it on other people’s thoughts’.

When I saw the responses to the questions I had asked, the first thought which struck me was that the answers felt genuine. They felt heartfelt and honest, much like their lyrics. I believe this makes Yonaka stand out as a band, because they take pride in interacting with their audience.

On their tour, they will be in Newcastle on the Sunday 17th November – buy a ticket and get yourself down there. 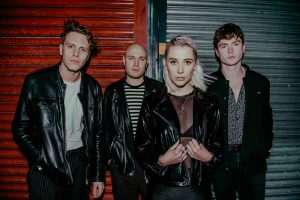