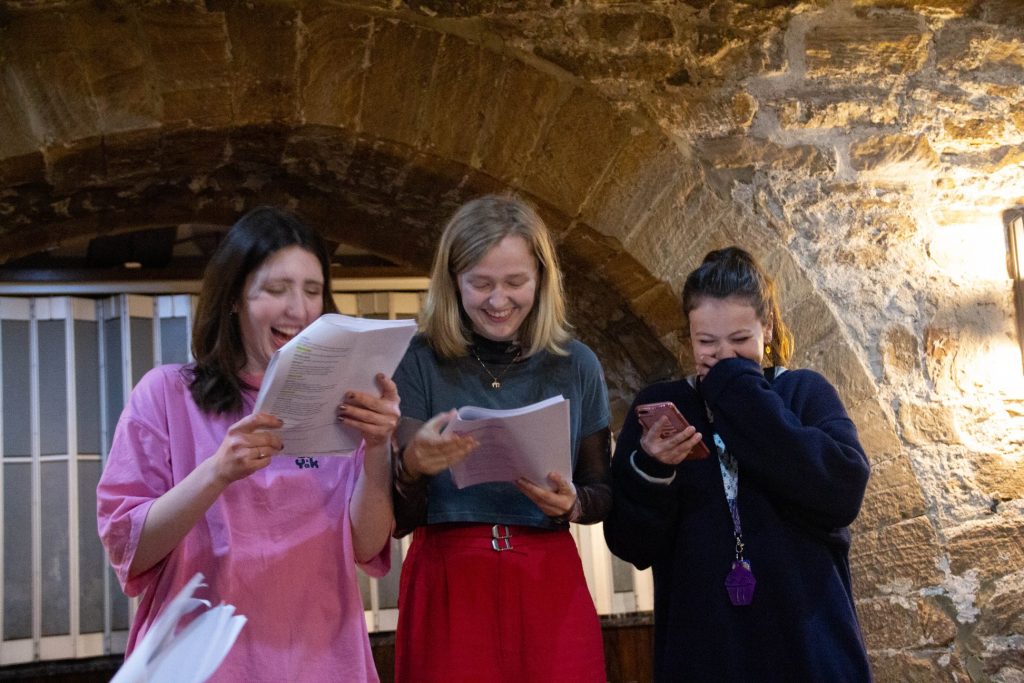 The sky was clear and the sun was shining brightly as I made my way out to the Fellows Garden in Durham Castle. This is where the director, Barney Mercer, has been busy rehearsing with his cast ahead of their first performance, this Friday afternoon.

You may think that everyone had (very sensibly) ceased all work in the post-exam period, instead choosing to laze around in the occasional bursts of sunshine. Not so with this cast of actors. They have been working around the clock to be able to polish lines, perfect deliveries and figure out just how exactly to bring this Shakespearean classic to life. What is very immediate is the energy everyone has in how they act and interact throughout the entire rehearsal. I’d hardly been there for 5 minutes and already actors where leaping back and forth across the stage. This was part of what made the whole rehearsal seem very refreshing. So often Shakespeare can just seem dry and dusty when we only see the arcane text on paper. It isn’t until you can get a cast of talented actors together that it really becomes apparent what the play is about.

And in the Director’s own words, Love’s Labour’s Lost is a “play about love – and loss”. From watching various scenes it was apparent that Barney is really crafting precisely his vision of what love is. The actors’ energy and chemistry is being brought together to create a vibrant image of what love can be – young and silly but still grounded in reality. Indeed this play looks set to be a great deal of fun as various pieces of song and dance are thrown into the mix.

Another thing to note is that this play has been set in the 1960s which means some very fancy fashion choices for the costumes. And when the play is happening outside, on a glorious sunny day, the acting and the music, performed on seemingly whatever instruments people had at hand, does give off a very carefree, summer vibe. The music also sounds great. The musical director has very cleverly adapted one of Shakespeare’s sonnets and set it to music based on the instruments the cast could provide. There’s an opening number, a closing number and various transition tunes between scenes. The music has a great balled feel to it and helps starts the play on a good note, literally.

There will be two performances in Durham, starting this Friday, before they leave to go touring around the South performing in some great venues such as Glastonbury Abbey. However, I will be making sure to go and see the play whilst it’s still in Durham and, if the good weather holds, Love’s Labour’s Lost looks set to be a great end to the year.