If you’re looking for a fun evening and are not really into theatre, a drama performance might not be your go-to entertainment choice. Why not? Because why would go see a performance with no story, actors who don’t talk or randomly take their clothes off and run around naked on stage? I am overdoing the caricature— although those examples are based on personal drama experiences— but if you’re not planning on seeing a play that is part of the western canon, then you are taking a risk. That risk lies in the increasing numbers of unclassifiable performances in contemporary theatre, and their post-modern elements, their absence of order, and the general absence of rules. A great effort was made in Europe to make theatre popular, but there seems to have been a shift from that purpose of making entertainment for the general public, to an artistic claim which turned drama performances into unintelligible displays of the directors’ intellect.

The definition of the movement is quite blurry— I won’t pretend I fully understand the French philosopher Lyotard when he says “a work can only be modern if it’s post-modern first”— which explains how chaotic some post-modern plays are. However, to be fair, it is worth noting that the movement is so eclectic that a performance is rarely entirely post-modern. In fact, the term is more of a label theorists use to conveniently categorise the uncategorisable. It doesn’t mean every chaotic and obnoxiously politically incorrect performance is post-modern either : all subversive performances aren’t necessarily post-modern, although a lot of post-modern performances are in fact challenging social conventions.

Post-modernism is a reaction to modernism— either as an opposition to avant-garde theatre, or as a way to reactivate modernism— and can be seen in a few elements, most of them revolving around complexity and multiplicity :

-> The use of multiple media on stage (like video)

-> An emphasis on the process— which means that the performance is finalised every night with the audience’s participation.

-> No specific meaning and multiple interpretations possible, whereas Brecht’s epic theatre for example— which was part of modernism— intended one specific meaning : the audience’s  political awareness.

-> An absence of clear roles : the director isn’t an authority and it’s often a collaborative work.

This is a non-exhaustive list of course, but it pinpoints the essence of post-modernism : total freedom and a general skepticism when it comes to the possibility of objective truths which were promoted by modernist thinkers. In other words, post-modern performances function as personal and subjective— as opposed to universal— intertwined discourses.

Good on paper, pretentious on stage?

On paper, deconstructing Aristotle’s Poetics— in which a play is defined as a textocentric succession of events— to enter what the German theatre scholar Hans-Thies Lehmann calls a post-dramatic form of theatre— focused on staging— is very interesting. It even goes beyond  the post-dramatic approach as we saw, and combines fresh and revolutionary ideas and techniques, but what about the actual result on stage?

Well, that’s where we see if an artist is all talk or actually talented. Paradoxically, post-modern performances are so unique and hard to grasp that it’s impossible to fake it. Therefore, you might not like it, but it’ll undeniably leave you disturbed, shaken, full of questions, and impressed. If you find it ridiculous and obnoxious, post-modernism might no be the problem, the artist’s non-ironic failure to use post-modern elements is. The real danger in my opinion for performers and directors is to be driven by a desire for subversion, rather than a genuine intent to create a complex and/or personal play. One performance that comes to mind is Stephen Cohen’s Put Your Heart Under Your Feet… and Walk! where the actor and director shows on stage a video of himself in a slaughterhouse, bathing— I kid you not— in the blood of dead cows. Needless to say, that is the kind of caricatural plays with post-modern elements —use of video on stage— you want to avoid.

The perfect example of a performance that’s post-modern but just enough is Romeo Castellucci’s Inferno, created in situ—which allows him to work on stage composition—, very loosely based on Dante’s epic poem. The Italian director combines just the right amount of post-modern elements with the rigour of modernism. The play opens on the director alone on stage,  who introduces himself “my name is Romeo Castellucci” (originally ”Je m’appelle Romeo Castellucci”, since he performs in the context of a French festival) and then proceeds to put on a thick jacket to prepare for the next part : dogs are set on him. This ‘scene’ alone is hybrid : in a sense, it’s very modern because he is breaking the fourth wall and offers a meta-narrative where the interpretation is clear. Indeed, the play is performed in the context of a dispute within the festival, critics were attacking the artists in newspapers and it was all very oppressive for directors. The dogs agressively biting and barking at Romeo Castellucci are meant to represent the violent reception of that year’s line-up. Yet, for the audience who isn’t aware of the dispute, there are other interpretations such as an introspection of the artist. 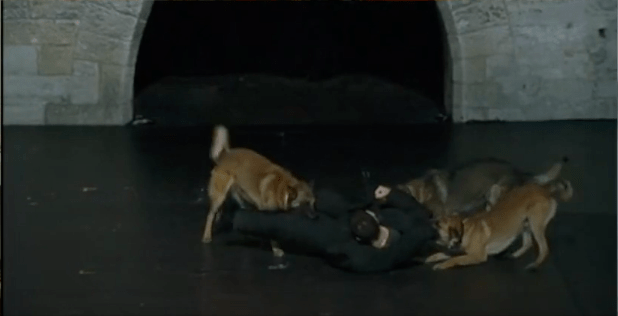 Romeo Castellucci experiments with a sort of thrill of reality, and inserts in his performances risky elements for which he remains a modernist authority. For example, he has kids playing in a giant one-way glass box, completely reversing one of the post-modern principle : this time, it’s not the audience that isn’t aware they are seeing a performance, but the children unaware they are part of one. The risk is however contained, and the four walls separating the children from the audience act as the director’s control over the running of the play. The number of actors itself— a real crowd— proves that a margin of error is possible— perhaps encouraged— and that Romeo Castellucci isn’t reaching for a perfect and finished result, but rather a more fluid performance : although it has been rehearsed and written for this specific theatre, the play is a constant process of execution, which in itself is a risk. 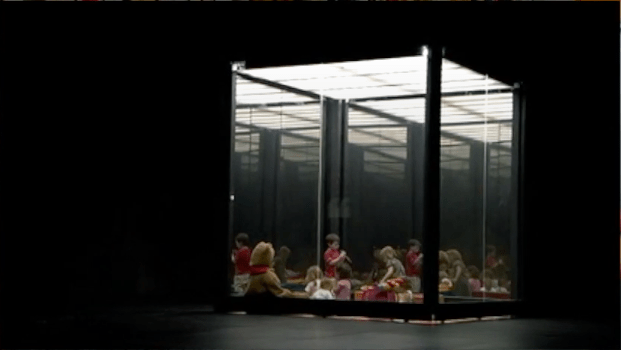 This particular play, which isn’t available online apart from a few clips—including the opening scene— gives me hope for the evolution of post-modernism, which I strongly believe is worth experiencing at least once. With just the right mixture of modern and post-modern, you might find yourself witnessing a piece of drama history. The only tool you truly need to appreciate post-modern plays isn’t a huge knowledge, but open-mindedness and the confidence to interpret what you see.