Why the Internet Loves Cats

In case you haven’t noticed, cats are everywhere on the internet. It’s inescapable. Millions of images and videos of cats just existing travel through social media at a weirdly infectious rate – even the most staunch dog-lover can’t avoid seeing cat-related media on their Instagram feed. So what’s the big deal with cats then?

In the wayward days of the late 2000s, I witnessed the big three names take the internet by storm: Keyboard Cat, Nyan Cat, and Grumpy Cat. If you ask me, that’s when the takeover started. Cats have owned the internet ever since, ruling the place with an iron paw, running it rampant like one giant, cat-themed amusement park. And the reason for their appeal is straightforward enough: cats represent the simple life.

Cats don’t have to worry about getting a job, paying their bills, or securing health insurance; they definitely aren’t concerned with dating, introspection, or facing their insecurities either. It’s an easy, pleasant existence we’ve all envisioned when the weight of the world felt heavy on our shoulders. Cats sleep for around 12 to 16 hours a day, but as a petty human, I can’t afford that luxury.

Sure, they’re cute. And sure, they do silly and stupid things that make us aww at our phone screens with gaiety. But it’s much deeper than that. Coveting the simple life of cats is intuitive enough, but that doesn’t explain why these furballs appeal to us especially. Other domestic animals like dogs, cows, turtles, rabbits, and chickens live the same simple lifestyle don’t they? So where are all the viral chickens then? 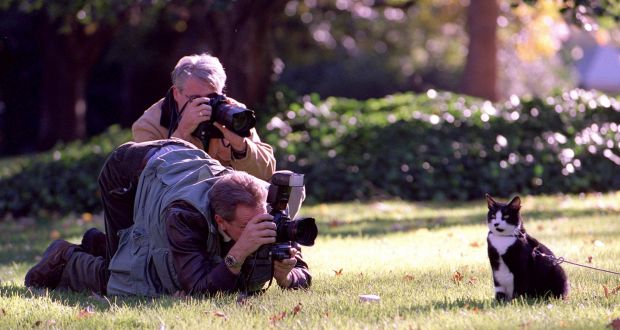 People have different takes on why cats are given elevated status on the internet. The Guardian columnist Jack Shepard argues that – unlike dogs – feline behavior is “cool, and effortless, and devoid of any concern about what you might think about it. It is art for art’s sake.” Blogger Jason Kottke considers cats “easier to objectify” and “easier to make fun of” than their domestic counterparts. Media mogul Ben Huh says that cats seem to be “the perfect canvas for human emotion”, considering the expressiveness of the animal’s face and body.

Empirical reasons for the internet-cat phenomenon exist too. A 2015 study into emotion regulation suggests that cat-related media is a potent form of Animal-assisted therapy (AAT) for many internet users. Surveying nearly 7000 users, researchers concluded that viewing images or strings of cat videos elevates mood and decreases negative emotions like stress within a short period. Simply seeing cats on the web is sufficient to producing this effect. But the caveat: mood elevation is momentary, which may lead to internet binging and procrastination. This certainly explains the surge in cat content, and perhaps why the internet seems to be so obsessed with consuming it. You can read more about the study here.

Cats have taken over the internet, no doubt. They pop up across Facebook, Instagram, and YouTube, refusing to let anyone go about their day without a daily dose of amusing cat-content. According to ThoughtCatalog, cats have become the “unofficial mascots of the internet”, and for good reason. The internet’s obsession is tied clearly to the fact cats are excellent companions to everyday life. They represent a simple life, devoid of any larger concerns, and make excellent stress-relievers even on the web. For all the benefits (and sheer entertainment value) they provide millions of internet users, it looks like cats are here to stay.