If you happen to be planning a trip to Rome – the Mecca of Christendom – and you have yet to exhaust your faculties watching endless documentaries and reading books on the history of this beautiful city, you might want to brace yourself for what awaits you. Yet still, having done that, some twenty-odd members of Durham University Theology Society could not have fully anticipated the transformational impact that a four-day sojourn in this great city would later have on them. That being said, it might be worthwhile to invest in a technically sound pacemaker in addition to a concise Italian dictionary of ‘touristy’ words and phrases (notwithstanding a fully functioning pedometer) when creating an itinerary for a trip to Rome.

Following an early-morning flight from Gatwick International Airport, feet hurried along the smooth floor of Fuicimino International Airport and stepped into a world where the phenomena of the past and the present seemed to coexist, fuelling each other like a well-oiled machine. Each step across the pavement brought one closer to the local gastronomy, religious paraphernalia, and Renaissance architecture for which Rome is globally reputed. The atmosphere reminds visitors of their own mortality while anticipating the splendour for which countless souls, divine and secular, paid the price in centuries past. It is at this point of the journey that hands instinctively slide into duffle bags in search of extra packs of lithium-ion batteries for the compact pacemakers at the interior.

The coaches that lay in wait to usher tourists into the heart of the city also afford approximately thirty minutes during which one can regain some measure of composure. However, this is soon distorted as the coach enters an abyss of postmodern and Renaissance nostalgia for which there is no substitute. It is a sight which prompts passengers to stifle their yawns and widen their bloodshot eyes in order to absorb the more corporeal side of Rome. As the coaches make their way into the residential centre, the downtrodden architecture of the city’s exterior is gradually replaced with the rush hour traffic at its interior. After disembarking the coach, members of the Society made their way to the Yellow Hostel some ten minutes away. It was there that they would anchor their belongings before discovering the city’s treasures.

Curiously, the evidence of the marriage between the past with the present was further observed through endless graffiti illustrations in the metro beneath the city’s surface and contrasted with the heavenly ornate buildings above ground. This duality of time extended itself to the interior of the Vatican City where the ‘otherworldliness’ of this great city reached its zenith. The interaction among those present facilitated a spiritual upheaval like no other. If this moment officially marked the commencement of the tour for the members of the Theology Society, a private Mass three days later at the interior of Saint Peter’s Basilica certainly served as a complementary end to a monumental experience.

It goes without saying that the local gastronomy – pizza, pasta, deep-fried risotto, gelato, pastries (and the infusion of Nutella in EVERYTHING) – evoked a measure of satisfaction matched only by the viewing of sites such as the Basilica di Santa Maria Maggiore, the Trevi Fountain, the Vatican Museum, The Sistine Chapel, the Colosseum, the Pantheon, the Basilica San Clemente, and many more. The warm reception extended by locals, pontifical representatives, and two seminal attendants further enhanced the overall experience the group profited from during the tour of Rome.

Unquestionably, the tour would have been incomplete if it had progressed without some exploration of the nightlife. There were several friendly bars, bistros and attractions to choose from dotted across the city. The members of the group were fortunate to refresh themselves at these postmodern ‘watering holes’ which also afforded the opportunity to interact with locals and other tourists. It seemed the fair thing to do, a reward of sorts, for having braved more than twelve hours each day traversing the city by foot, wheelchairs, and occasionally conceding to taxis and metros.

It was with equal enthusiasm that participants concretised the personal connections they developed with Rome in a bout of souvenir shopping – after all, when in Rome, one can’t help but be a tourist! The perusal and purchase of various books, fashionable adornments and religious memorabilia along the outskirts of the Vatican afforded members of the Theology Society to leave with a ‘holy piece’ of the city in tow.

Alas, despite all incantations to extend the sojourn, the end inevitably approached, marked by extended waistlines, broadened smiles, and reddened eyes – some of which could no longer resist the fatigue of four resplendent days of fun and friendly debates. If there was ever any doubt as to the success of the group’s tour in Rome, such was quickly supplanted by the uproar of recanted stories, the exchange of photographs, and theological epiphanies which continued as the group re-entered British airspace.

The pedagogic, interactive and recreational opportunities offered by the Theology Society’s tour of Rome during the Easter break of 2015 certainly cannot be understated. The memories gathered are sure to promote the passionate pursuit of theological interests in addition to promoting the personal growth and development of those fortunate enough to experience the beauty of Rome. 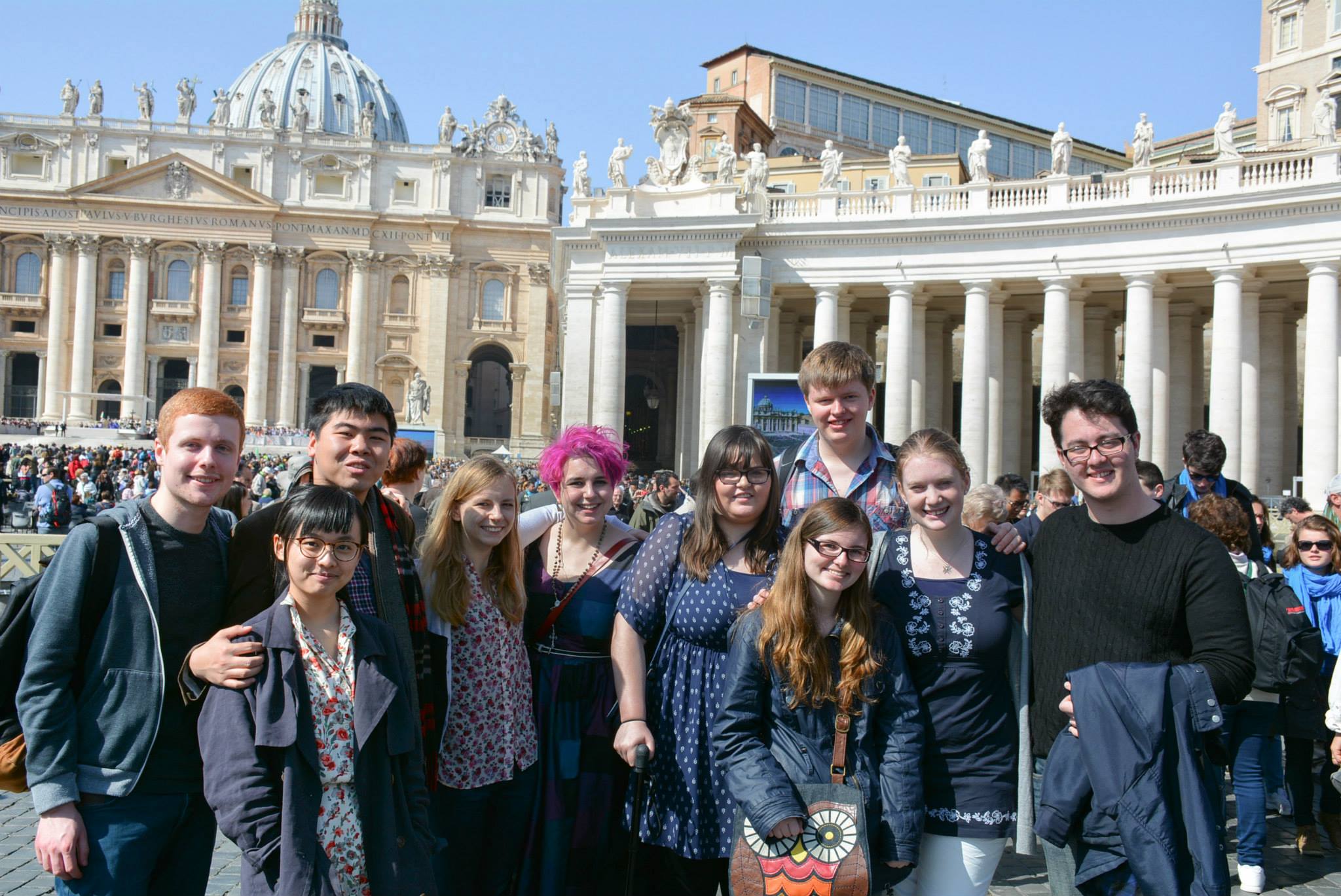 After the Papal Audience in St. Peter’s Square