The Philosophy in (and of) Breaking Bad 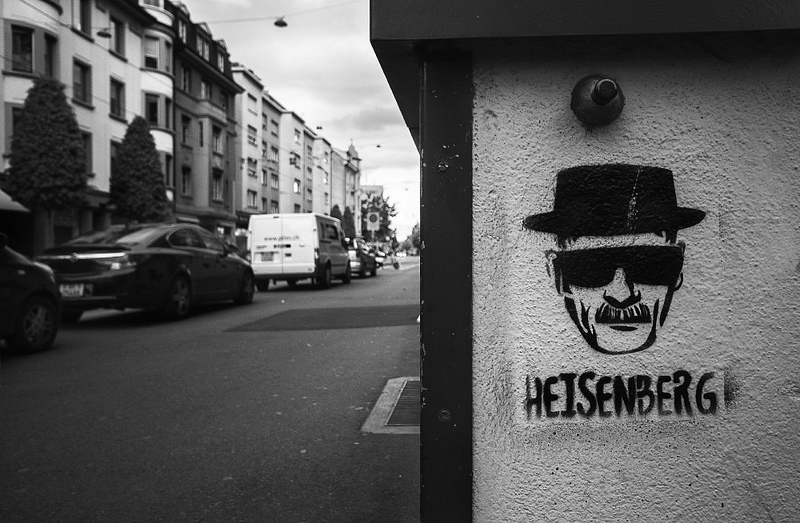 Does Breaking Bad lead us to question our morality?

WARNING: DO NOT READ THIS IF YOU INTEND TO WATCH, OR HAVE NOT YET COMPLETED WATCHING BREAKING BAD.

The season 5 finale of Breaking Bad snagged 10.3 million viewers in the U.S. But why? Because bad is good. We’re a species that loves to question morality, and that’s exactly what Breaking Bad encourages.

In brief, Breaking Bad is the story of a cancer-ridden chemistry teacher who finds a blue crystal lining to his own dark cloud. We follow the life of Walter White subsequent to his lung cancer diagnosis as he fights to ensure the financial security of his family after his death. A son with cerebral palsy and a pregnant wife tug at our heart strings from the very first episode. To the extent that Walt’s choice to begin cooking methamphetamine with sidekick, Jesse is, for the most part, welcomed by the audience. As such we begin a journey, alongside Walt, through his own metamorphosis, his moral destruction.

Walt’s (a)moral calculus, interestingly, remains with him throughout the show. Despite how we witness his behaviour and lifestyle change, his integral moral convictions remain largely intact. The keyword for Walt is, no doubt, duty, a sense of duty towards his immediate family which is unwavering. His own extended family are, from the outset, beyond the reach of his sense of duty; his choices surely against the wishes of his DEA brother-in-law, Hank. But a Kantian duty remains with Walt as he progresses, which inevitably draws in an empathic audience. What does reverse during the progression of episodes and seasons is a utilitarian care for others. Whilst he could never be referred to as a devout utilitarian (can anyone?), his care for others extends at least some distance. Even the meth-heads he provides product to are considered, as a subsidiary motivation in the first instance, to provide a cleaner, purer product. This is in no way the situation come the final series; no moral individual would blow up a nursing home or poison an eight year old child. We even witness the absorbing of those to whom his duty stands into his immorality, Skyler’s involvement in the car wash, for instance.

As has been noted by Idreen Kahloon, who wrote a very interesting article on the topic for the Harvard University Institute of Politics, Vince Gilligan (Breaking Bad’s writer and producer) aims to lure the audience into sympathy with Walt, before slamming on the breaks and declaring that we shouldn’t sympathise with a meth lord intent on killing anyone in his path to unfathomable wealth. And of course, we shouldn’t. Breaking Bad is therefore serving an inextricable role by forcing us to question our own moralities through our alliances with the on-screen characters. It is amazing how a show can do such, but illustrates how philosophical thinking can infiltrate our everyday lives.

It’s important to note that no mention of religion is made at any point during the five seasons. As such the show should be interpreted as an exploration of morality in the face of abandonment, the brutality of nature and humanity’s response to it. It is evident that Walt responds with an internal locus of control, his own life philosophy being that power, knowledge and control are mutually reinforcing, irrespective of the acts you perform. This is a philosophy which ultimately fails. In essence, we’re subject to nature no matter how internal our locus of control. There is a strong nihilistic thread throughout the show – indicating that life is, at base, meaningless. The lack of religious influence paves the way for the real punishment for Walt’s sins – lung cancer. There is a clever nod to scepticism in the naming of Walt’s alter-ego as ‘Heisenberg’. Werner Heisenberg was a quantum physicist and discovered the ‘uncertainty principle’. Whilst I am no physicist myself, the principle suggests the limits of human knowledge in attempting to understand nature. As such, the philosophy in Breaking Bad, I would say, is a philosophy of the brutality of life, despite our attempts to influence it and control our own animalistic, egoistic moralities.

I would like to add a few words here just to cover the philosophy of Breaking Bad. I thoroughly enjoyed the show and would recommend it to anyone I meet, but a consideration should be taken as to the influence such shows can have.

There is an obvious mocking of the American legal system which runs straight through the centre of the show. Saul Goodman as a character is the epitome of all that is wrong with such a system, but there are deeper concerns. The show suggests that the real perpetrators of crime are big businesses (Los Pollos Hermanos and Madrigal Electromotive) who often emerge unscathed while the addict on the street suffers innumerably. The show is in no way intended to be taken in isolation from real life. But whilst it draws on real life, has it had an effect in the other direction?

In a word, yes. The normalising of meth is an inevitable side effect of Breaking Bad. But when the drug is one for which every user is an addict and for the U.S. is proving a growing and alarming problem, we should not shrug off the effect Breaking Bad may have had. I’m in no way saying that the horrific murder scenes of Breaking Bad will have induced every viewer to go out looking for the lifestyle immediately, but there will undoubtedly be some, on the sidelines of society, who have had their curiosity fuelled (most probably by that car-sized pile of money in Skyler’s lock-up).

Breaking Bad’s fictional blue meth is now being produced on the streets of New Mexico, according to a number of news outlets. The ‘sexiness’ of this kind of glamorous TV show cannot help but create desires amongst some of its audience. Some will see Walt’s annihilation and introspect about their own moral compass. But the likelihood was always going to be that a significant few, blind to the moral and philosophical messages, would be absorbed by the normalising of the drug. This new blue meth is cut with chemicals which are causing sickness in those who use it. I have no answer to this and, for the most part, I do not side with those who blame television shows for the behaviour of their viewers. But when considering the philosophy in Breaking Bad I could not help but take a moment to consider the philosophy of the show. In essence, if you play with fire, meth addicts may get burnt.