Philosophy of the Month – Virtue Ethics 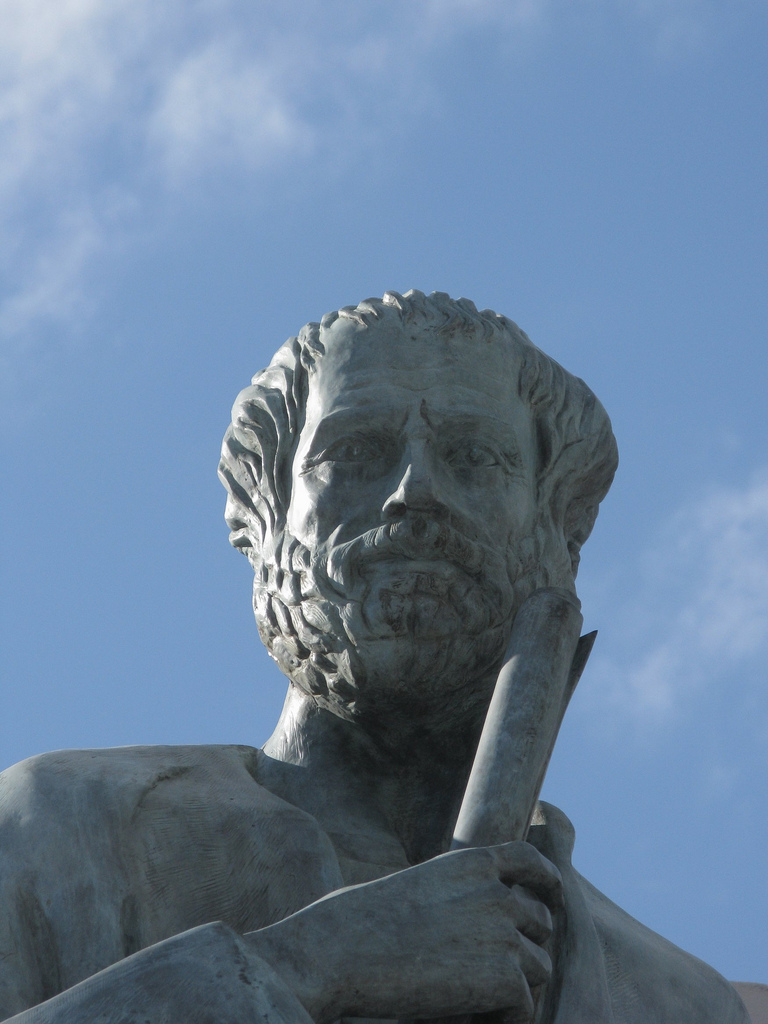 The main man himself – Aristotle

Today in Philosophy of the Month I’d like to have a look at possibly the oldest formal philosophical theory; virtue ethics. Plato is thought to have come up with a form of virtue ethics or at least to have set the foundations, but the real philosopher who is credited with establishing and championing the theory is Aristotle. Unlike the Utilitarian and the Kantian ethics we’ve looked at previously, virtue ethics does not focus on what kind of acts we should perform (which act is right or wrong) but instead considers what kind of people we ought to become.

Now as you may be aware, Aristotle is a pretty big deal in the philosophy world – he was influential in medicine, religion and then managed to practically found virtue ethics in his spare time. Uniquely, Aristotle wasn’t bothered about the morality, or immorality, of certain acts but he was certainly bothered about how our characters are developing. The idea being that someone with a virtuous and refined character would never act immorally – he would just have this sensitivity towards what is right and wrong. Aristotle was pretty keen on the idea that every living being has a purpose and that the life well lived is achieved when this purpose is fulfilled. Now humans have a pretty special kind of flourishing as we have the capacity to reason. Aristotle called this human flourishing eudaimonia which can be translated to something like the happy life. But, Aristotle’s conception of happiness wasn’t exactly like our common perception of happiness. Aristotle probably wouldn’t think that stumbling down to Klute for a quaddy or two, no matter how happy it might make us, comes anywhere close to flourishing or eudaimonia. It’s useful to think of it in this way – happiness is not an adjective that describes how we feel, it is a verb, an activity. Nope, it’s not easy – eudaimonia is actually pretty hard to come by.

Basically to come anywhere near to eudaimonia we need to live the virtuous life by harnessing the virtues. Simple right? ‘Fraid not. You see, a virtue is not simply a tendency to do what is honest or generous or brave. Instead it is a character trait that is so well entrenched in the character of the person that the virtuous agent couldn’t possibly even consider doing something unvirtuous – I’m not sure that anyone I know would remotely qualify. ‘But what are the virtues?!’ you ask (or at least, you’d do well to ask). Well, Aristotle came up with some himself – temperance, courage, modesty and friendliness to name but a few – but common to all the virtues is that they lie as the mean between a vice and an excess. In this sense each virtue has not just one opposite but two! So, if we take the virtue of honesty for example, getting the right amount of honesty into our character is pretty important. Predictably the vice of honesty is dis-honesty – a tendency to avoid telling the truth or to lie. The excess of honesty may be harder to comprehend – you can’t be too honest, right?! Well actually you can. Part of being virtuous is having what Aristotle called phronesis which means ‘practical wisdom’ and he thought that in cases like honesty being sensible enough to know when to keep your mouth shut and not to tell your girlfriend that you hate her brother, or your best friend that she accidently spent the whole night with her skirt tucked into her Mini Mouse pants, basically to judge the situation, is part of being virtuous.

So now that we’ve established what the virtues are, how do we go about gaining them? This is pretty tricky and unfortunately one of the major criticisms of virtue ethics is that Aritstotle actually admits that most people will never achieve eudaimonia. Sorry if I’d got your hopes up. Not only does acquiring the virtues require a lifetime of hard work learning from a virtuous teacher (not sure that many of my lecturers would qualify) but also getting to the stage of flourishing is partly down to luck. Depressingly, Aristotle gives the example of a poor virtuous soul (I’ll call him Bob) who finds himself in a situation in which virtue demands that he give up his own life. Unfortunately for Bob he’s on the right path to eudaimonia, he’s doing all the right things, but circumstances dictate that today is Bob’s final act of virtue and off Bob goes into battle or Klute or whatever and poor Bob never gets that warm fuzzy flourishing feeling.

So how does virtue ethics stand up in the ethical theories arena? I would say pretty well. For one, it still exists in varying forms today; all sorts of contemporary philosophers are willing to give it a go, the key to its appeal probably lies in the fact that it’s character based rather than action prescribing. Personally I quite like the idea of developing my moral character rather than having Kant silently (or not so silently) judging me every time I lie to the axe murderer at my door regarding the location of my brother. However, not giving us any idea of how to act is a bit problematic. Actually applying virtue ethics to day to day moral problems is tricky – it’s all very well saying: be virtuous kids and you’ll live a flourishing life, if we’re not given a way of actually being virtuous.

So there’s something to ponder. Over the last three months I’ve given you a basic insight into the three primary ethical philosophies – each very distinctive and with their own merits and frustrations. So now that you’re clued up what do you reckon? Are you more of a Kantian duty fiend than a forward thinking consequentialist or perhaps you think all this action based stuff is too restricting and our moral characters should be the focus? Whatever your view I hope you’ll agree that these questions – What should I do? What kind of person do I want to be? What is the moral life? – are pretty interesting things to ponder.

That concludes my philosophy of the month segment (for now) but watch out for my article next month where I’ll move swiftly from philosophy to religion – you wouldn’t want to miss it!