Jordan Peterson made headlines in the UK, after appearing on Channel 4 on the 16th of January to discuss gender dynamics and post-modernism with Cathy Newman. It turned out to be a major success for him. An otherwise very capable journalist failed to truly challenge his views but instead misrepresented him in a hostile manner. That made him seem rational, strong and most importantly, correct. He has been called “maybe the most influential public intellectual” by the New York Times, his latest book is an Amazon best seller in the US and the UK. However, he is a dangerous man.

This series of articles aims to be a definitive rebuttal of Jordan Peterson. I disagree with Peterson’s ideology, methodology, epistemology and conspiracist tendencies and will thoroughly debunk them. As evident from the title, my criticism will also have an ethical component since I not only disagree with his ideas, but I regard them as harmful.

The first part of the series will focus on his rise to prominence. In the spirit of free discussion, I am open to any criticism through the comment section or my personal social media and will address it as the series progresses. 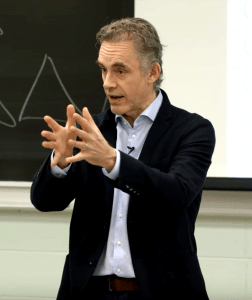 Peterson lecturing his class. All his lectures are available on his YouTube channel

Although he is an accomplished professor and clinical psychologist, he was not known outside of his academic circle until he came out publicly against a proposal in the Canadian Parliament that would extend human rights protections to gender identity. The eventually infamous Bill C-16 would put gender identity in the same legally protected category as sexuality, race and religious faith. Peterson objected by arguing that the bill implicitly endorsed a socially constructivist view of gender, which he considered to be a scientifically unsettled issue. Where one stands vis-à-vis Bill C16 is not very relevant to this conversation (although the author of this article would have voted in favour). The important thing is how his stance on the matter propelled him into fame.

The cause of his initial rise can tell us much about him as well as his fan base. Peterson claims that he opposed C-16 in good faith and that he does not bear any animosity towards transgender individuals. The core of his objection is that it would compel people to use gender neutral pronouns. On the surface, it is a common-sense if not pedantic objection given that no one has ever been convicted of violating pronoun preferences. This must be acknowledged if we are to truly understand his ‘game’. Using this relatively inoffensive (to cis people) objection as a basis, he constructs an argument whose conclusion is that transgender activists are ideologically compatible with, if not ideologically identical to, Chairman Mao’s most faithful executioners. 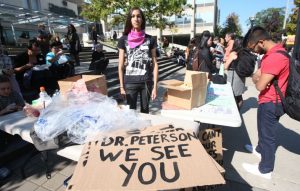 Peterson’s public objection to C-16 caused protests against him. He declared the protesters Far-Left ideologies

From an outside perspective this would seem an absurd rhetorical leap, but once one is drawn in from the original claim it becomes much easier to believe. Peterson argued that transgender and particularly gender-non-conforming students who were in favour of C-16 were seduced by ‘Cultural Marxist’ (sic) ideology. This accusation subtly implies that being gender-non-conforming is in-itself a far-left ideological construction, given that the small number of people who fit the category were also likely to support C-16. In fact, Peterson explicitly made this inference. After one accepts this line of thinking, a comparison with the Red Guards does not seem as outlandish. Peterson had made a group with objectively limited social and political capital the Goliath against his brave, truth-against-power, David.

The fact that this criticism made him so popular online offers us an insight on his fanbase. Arguments over legislatory amendments rarely receive such attention or have their participants become celebrities, however this one did. So why was this particular issue deemed so important? It cannot be its legal consequences because it at-most prescribes a fine to someone disrespecting one’s gender expression. It cannot be its domain because it increases protections for only a very small percentage of the population without being at the expense of others. The reason lies outside the legislation.

Opposition to advocates of social justice and trans-rights activists in particular had been popular on the Internet for the six years. On YouTube it became a profitable venture to compile montages of the loudest and  most obnoxious activists, which they called “SJWs”. Although the stereotype of an SJW (Social-Justice-Warrior) only describes very few people, it became a rallying cry for reactionaries to denounce efforts of increasing awareness of trans issues and gender issues. As a group, they are irrational and slightly psychotic in their approach. They repeatedly criticise and harass the same few activists who are brave enough to advocate their cause on YouTube, a place that can only be described as the elephant graveyard in the Lion-King in terms of political discourse. By 2016, the ‘anti-SJWs’ were losing steam, incidents of ‘SJWs’ were few and far between. The few cases had been completely squeezed for content. As the culture continued to shift to openness, they were being left behind.

And then came Peterson. A ‘rational’, middle-aged man who could explain through ‘science’ and intelligent discourse everything that they were trying to do through endless pedantic YouTube content. Peterson became an instant hit among these communities. They idolised him and promoted him on social media. Very soon after appearing on the scene, Peterson was invited to right-wing Internet shows like Louder with Crowder and the Rubin Report as well as very popular ‘centrist’ podcasts like the Joe Rogan Experience and Waking up with Sam Harris. There he had a platform to articulate his ideology and an audience of millions to listen.