How to be an Antitheist 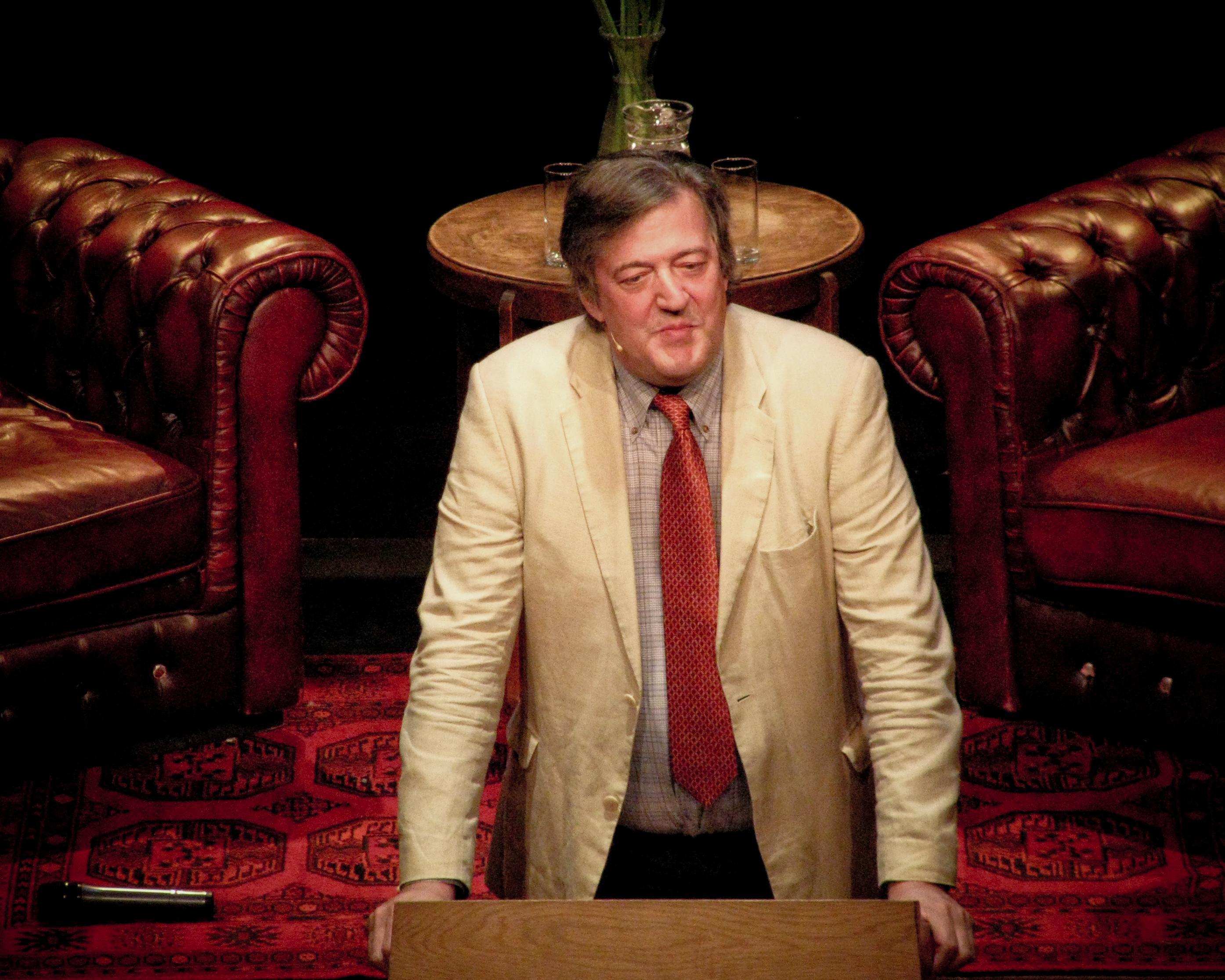 “If you met God, what would you say to Him?”

Recently, my Facebook newsfeed has been flooded with links to various recordings of Stephen Fry’s interview on RTE’s the Meaning of Life, in which he responds to the question: “If you met God, what would you say to Him?” Fry’s answer is to basically reiterate the problem of evil, illustrated with a pompous “how dare you?”

Fry is a spokesperson for a contemporary religious sentiment of such antitheism, in which a kind of scientistic strict materialism underpins the disbelief in God that allows this antitheist attitude. The problem of evil as Fry formulates it is often levelled by advocates of this worldview against believers as an example of an inconsistency of their worldview. And naturally, his comments have been taken up as a witness to the kerygma of this movement.

I’m going to come out here and say that I find the philosophical ‘problem’ (or ‘problems’) of evil horribly boring, and its endless repetition enough to kill off any embryonic faith in a loving God that I might have for reasons quite apart from its propositional content. The reason for this is that there is a very obvious and entirely coherent response. When asked, “how could a loving God allow such suffering?”, the simplest reply is, “how should I bloody know?”

Obviously, this answer is not hugely emotionally satisfying. However, when you start asking after the motivations of the ground of Being, the Absolute Other, you need to start lowering your bar for the quality of answer you’re willing to accept. The story of Job (which I am going to assume that you know) is often cited as a biblical response to suffering – and this is the message construed by one possible reading of it: when Job asks God why he killed his family and destroyed his livelihood, God’s response is basically, “look at how insanely incredible I am. What makes you think you’re in a position to understand me?” Appreciating this provides the grounds for a more interesting inquiry into the relationship between theism and evil.

Begin by setting aside any belief you have in immaterial reality: there is no God, nor Platonic Good. No transcendental law of agency that is not reducible to the outworkings of the mechanical processes of the brain, fully determined by immanent biological structures. Ethics is a matter of sentiment, or a purely incidentally motivating psychological response to some property. Now reflect for a moment upon all the human tragedy in the world. Install yourself in it. Imagine a corpse – a person in all their infinite depth reduced to a brute object, heavy and unresponsive. Once they spoke, laughed, loved. Now they are just meat. Now imagine you are the dying one: lying on your back, looking up at the sky and knowing you will never move from this spot again. That the future you imagined not so long ago will never come to pass. That all your plans have been cut short by a fast approaching horizon, beyond which lies nothing. Feel your limbs growing heavy, your breath rattle in your chest…

Now go and make a cup of tea, and try to worry about quantities of milk, steeping time and water temperature.

While you did this, you should have experienced a sense of what the philosopher Albert Camus called ‘the absurd’. All our human activities are performed against a backdrop of senseless void. We are always destined to be nothing; against this our actions are merely filling time. We live our lives as if there were some kind of shape and structure to them – as if there were some kind of ultimate logic by which they operated, granting a context in which they can be situated that elevates them beyond mere configurations of substances to which the universe is entirely indifferent. And indeed, we have a psychological need to do so. But the fact is, this structure is the film upon which we sit like pond-skaters, atop a horrifying abyss of chaos and nothingness. And sometimes this film breaks and we plunge headfirst into the mute insanity of the material. When we encounter suffering – when the great story of a life ends ignominiously as a child’s eyes are devoured by worms – the senselessness of reality is revealed to us.

This is the problem of evil at its most fundamental level: that the illuminating light in which the world is cast will cut out, and we as conscious beings will be left adrift in the darkness. Against this, we look up to God and ask, half pleading, “why?” The question echoes in the void.

To be a strict materialist requires us to embrace the absurd: to stand before the meaninglessness and accept it. And of course, this does not permit claiming that “we must be the source of meaning in our lives”. This is just a trite attempt to substitute ourselves for God. No matter how much we care about others, or how much joy and beauty we find in something, it remains a distraction from the fact that we gods will die, and with it all the ‘value’ with which we so desperately try to paint upon the world. Such a view is a crutch, and a bootstrap upon which we can strain in a futile attempt to haul ourselves out of the abyss.

What person can truly face up to such a challenge? Who has the mettle to confront, unflinching, their own nothingness? Camus would tell us to give up our desires for transcendental meaning; that Sisyphus must find joy in the very act of rolling his boulder, with no hope for completing the task. But who is truly so heroic, so possessing of poverty of spirit, that they can look to the suffering child and say, “this does not, ultimately, matter”?

In such a context the explicitly religious life is truly a more honest one. It is the religious life which, in the face of its cultured despisers, affirms the meaning which we apply to the world and denies the absurd. Its honesty lies in the openness of the affirmation. By contrast, no-one is ‘merely’ an atheist materialist – that is, a nihilist. Rather, our ‘materialists’ subscribe to a million variations of a nonsensical humanism that is naïve at best and cowardly at worst, failing or refusing to grasp how it has done away with the grounds of its most cherished beliefs. For what is the value of a ‘human right’, or ‘autonomy’, or even truth, when there is no ‘value’? We say Christ cannot have walked on water – but what is this compared to ourselves? We are treading on air.

Instead of raging at God for the evil in the world, the religious person cleaves to God’s inscrutable purpose and its promise of meaning in the face of it. But it is only a promise, and all promises are a gamble for those who live in hope of their fulfilment. The problem of evil, then, is an articulation of the ultimate fear: that the gamble will not pay off – that there is no loving ‘God’, but only the absurd, or a God that revels in it. To sanctimoniously confront God as Fry does is to miss the point. The problem of evil is not an accusation to be levelled at Him, but the desperate crying out of a child in the hopes that their Father will answer and reassure them of His gracious presence. That He will speak forth a Word, and not the cruel laughter of the Homeric gods. We are led here to a second reading of Job: he is satisfied because he gets an answer. Explanation is not necessary.

In the face of this, and although we lose all motivating reasons to be so in the loss of ‘reasons’ in general, how can we be both materialists and antitheists? We must acknowledge God’s greatest failing: that the horizon has been wiped away; that our indignation is cursed to be meaningless; that He has never existed. But, ultimately, this too is nothing. The earth is unchained from its sun; there is no light of justice in which we can perceive our situation. If the world is absurd, then God is blameless.

And so we come to a final, most difficult reading of Job. Job’s complaint isn’t silenced in the face of God’s greatness, nor by a reassurance of His presence, but by the revelation of his own insignificance. For the materialist, a God whom we hate leads only to a deep anguish: at our finitude, and at its own unjustified nature, to which Antitheism must bear witness. Fry’s answer, then, should have been this: “Nothing: because in the face of such absurdity, only nothing can be said”.