‘Bone Cancer in Children: How Dare You?’ 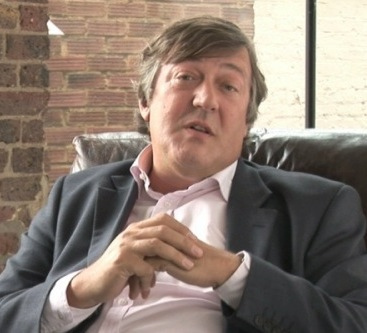 “Bone cancer in children? What’s that about?”

You’ve probably heard, or at least heard about, Stephen Fry’s recent interview. It seems to be all over Facebook at the moment. If you haven’t, Stephen Fry, asked what he would say to God should he ever meet him, replied, ‘How dare you?’ The sheer amount of suffering and pain in the universe, he continued, meant that any God who created it must be a being of utter Evil.

I am a Christian, and I believe that, so far as we can understand God, He is the reality of which every moment of earthly joy, or love, or goodness, or happiness is only a dim reflection. I do not believe that God is evil, but that He is good, the source of all goodness.

Therefore the existence of evil is a serious problem. The more good, and loving, and merciful you believe God to be, the more serious a problem pain becomes.

It is very easy when writing or speaking about this issue to make pain or suffering sound trivial. That is not my intention, even if I do end up being guilty of it. The problem of pain is not intellectually unanswerable. I do find much more of a problem with it myself on an emotional level.

I can see why there could have to be at least some suffering. In my own life, relatively pain free, it has been the more unpleasant parts that have developed my character the most. If a child grows up with no problems, or discomforts, having everything they want, then they become spoilt. If we are God’s children, we should not expect Him to spoil us, and so should not expect a life that is free of any hardship and discomfort.

But it is obvious that this does not help, save a little. The amount of suffering in the world, and the clear presence of terrible evil, do not seem to be explicable in this way. I do not think they are meant to be, however. The Bible says that God did not create the world the way it is now, and He did not intend it to become this way.

The Bible says that when God created the world, it was good, and free of pain, and of suffering, and of all evil. You probably know the Genesis story. Evil entered into the world personified, in the form of the Devil, who tricked Adam and Eve into betraying God and disobeying His commands. As a result, Humankind and the whole world were damaged and decayed from their original perfection.

An obvious question is: how do you fit this into evolution, and into the modern view of how the universe appeared? My answer is: I can’t. In the same way that I believe the Genesis creation account is a simplified allegory of what really happened, I suspect that the story of Adam and Eve and the apple is a simplified version of something immeasurably more complicated than the creation of a universe. We can’t understand it yet, so we are given a story that nevertheless presents the main facts.

God did not create the world with all its suffering. God created the world as a perfect place. But it is no longer perfect. Some of the evil and suffering comes from the corruption that has possessed the world- disease, famine, and all kinds of natural disasters. Other Evil comes from the fact that human beings ourselves are both driven to do evil things, and in fact, can actually take pleasure from doing evil.

I think that this does explain why there is evil, and so much of it. But it also poses more questions. If God is all powerful, why doesn’t He just stop it? Why did He create the world in the first place? He must have known that Adam would eat the apple.

I think that these questions are much harder. The standard answer as to why God does not intervene is that He wants to preserve Free Will. If He prevented one set of evils, why not prevent them all? The only answer can be that somehow having beings with wills rather than automatons is somehow worth it.

I can see how this could be the case. I think it is too easy to forget how amazing our existence is. If you think about how amazing the human mind is compared to anything else, and how bizarre it is that we exist and can experience the world at all, and if you assume that the way we exist now is only a dim shadow of how we were meant to be, and how we will be, I can understand this.

That is what I mean when I say that the problem of evil is not intellectually unanswerable, but emotionally problematic. I can construct an argument as to why God could allow things to be the way they are. I think that the argument is solid, and that it logically solves the issue. It still doesn’t feel very satisfying though. I can see why God could be good and still permit the suffering. But it makes it much harder to feel that He is good.

I admit I sometimes find this hard to believe. But ultimately I do believe it. I believe it because of Jesus. The God who created the universe and permits it to continue in the way it is has not simply sat back and watched the suffering of His creation. So, why doesn’t He intervene? The fact is: He has. I believe that God entered our universe as a human being- more than that, he was born as a baby.

He was born as a baby, and grew up as the son of a peasant carpenter. The creator of the universe made chairs and barns for a living. There is something ridiculous and unbelievable in all of this, I will admit, however I believe it. I also believe that God was killed. He was nailed to a post and left to die. At the moment of His death, He absorbed all the evil that had corrupted humans and the universe into Himself. I do not think there could be any agony comparable to that – God being split from God by sin. Words fail, and I am running out of them.

But that is why I nevertheless believe that God is good. He permits suffering to continue. But he lived a human life, the same as ours, and endured sadness and pain; and at last an agony which I do not think any mind can comprehend. That is why I believe God is good, regardless of the evil in the world. We may suffer, and God may not yet have put an end to it, but He suffered alongside us, and more than anyone, in order to make sure that one day, there will be an end to it all.

One day there will be a new universe, which will be greater than the old one could ever have been, and by the death and resurrection of Jesus we have the ability to cross over through death and to enter it.