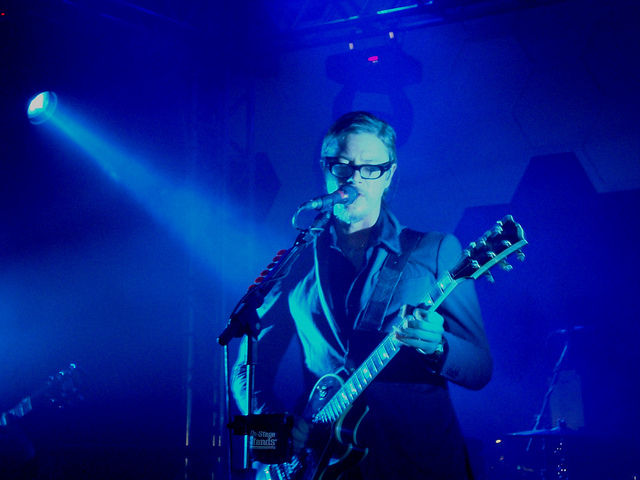 Interpol are back. NME Headliner. Hmm… Why should anyone care? No awards. No recent album release. Half full venue. Circa Waves, Royal Blood, Temples. Youth. The next generation. Interpol were cool fifteen years ago. So what are they doing here?

Amidst the go-lucky indie of Circa Waves, the grungey hard-core of Royal Blood and the pointless parody of Temples, Interpol stand out like a sore thumb. Whoever conceives this line up has a niche vision. Picture the ideal: a sun-loving surfer (Circa Waves) who is equally happy in a basement (Royal Blood) as a beach and loves to ape Marc Bolan (Temples) in his spare time. This is before we reach Interpol so an attendee needs a passion for post punk, sparse lighting and dark suits. Sand/suits; Basement/Sun; Bolan/Curtis. Odd kid.

Is this the NME reader? Whatever it is, it is certainly confused.

Circa Waves are okay, good when angry, woeful when doo-woppingly jolly. Royal Blood are loud, astonishingly so for a two piece. They inject the crowd with a fervent Yorkshire frenzy. Temples dissipate this urgency with their mediocre ‘vibe’, which, albeit at times immersive, is too overtly contrived and lacking any innovation. Bagshaw has the ‘look’, but that is about it. Unless you think Temples are at the forefront of the Psychedelic resurgence as a few in the crowd do.

But where is all this leading? An Interpol usurpation. The young and hip migrate backwards and the middle-aged surge forward for the faux post punk revival headliner.

The band are on shreddingly good form. They settle back into the songs that forged their career and loyal fan base launching into this series of old favourites with ease. Vocalist Paul Banks and lead guitar Daniel Kessler are clad in black suits. Mad Men miming Fogarino pulverises the bass drum in the background. NYC 2002. Nothing has changed. Except it has. Even without iconic bass monger Carlos D, who departed during 2010’s eponymous album, the band remain a cohesive, super-taut whole. Opener ‘Say Hello to the Angels’ with its searing visceral momentum and dislocated percussion section breakdown followed by the twitching itch of ‘Evil’ immediately wins the crowd. They are back.

The ensuing greatest hits package leans heavily on most commercially successful album, 2004’s Antics. There is room for the more complex tracks ‘Take You On a Cruise’ and ‘Not Even Jail’ which are immense in the live setting and transform into unchallengeable monoliths. The main set concludes with ‘Slow Hands’, the soundtrack to a Josh Hartnett starring Armani ad representing Interpol’s peak in popularity in terms of both chart success and critical esteem. 10 years ago. Why are they here, now?

The answer is in the two new tracks. The simply loud ‘Anywhere’, the punkiest Interpol yet heard and the more customary extended builder, ‘All the Rage Back Home’. An apt title because Paul Banks is back on his angriest form. An angry, noisy Interpol is one to get excited about at any time and the signs are strong ahead of the new album due this summer. So, promotion, alongside availability is why they are here. Any sense of a grand strategy is lost amidst the cord of pure ecstasy linking the band to its audience. Kessler makes eye contact and judderingly caresses the stage as he translates his guitar glory into distorted dance. Paul Banks breaks his detached absorption to smile, and, even, laugh. Not very post punk. But the atmosphere in the room is radiant, not gloomy and the band are humbled by the response of so engaged a crowd, albeit majority veteran fan base. Tonight has transformed into an Interpol gig; whatever the title. NME Awards: pah!

Disappointingly, there is no room for the classic, ‘Roland’, the story of a bearded Polish butcher or the fractured doom-dance melody of ‘PDA’ from their epoch defining debut album. They polish the main set off with ‘Stella Was A Diver And She Was Always Down’, an oft overlooked live track, but true fan favourite which serves to complete the fan pleasing theme of tonight’s set.

Overall, it is a strange night. We were reminded of Interpol’s still loyal fan base. We now know Interpol are still alive and that their new album will be worth a listen. They sound invigorated and refreshed after fifteen years together and ready to right the wrong of their disappointing previous album. Oh, and that Royal Blood are more popular than Temples. That is a mere footnote to Interpol’s total dominance. Let the big boys play: Interpol, a real institution to blast through the NME hype.