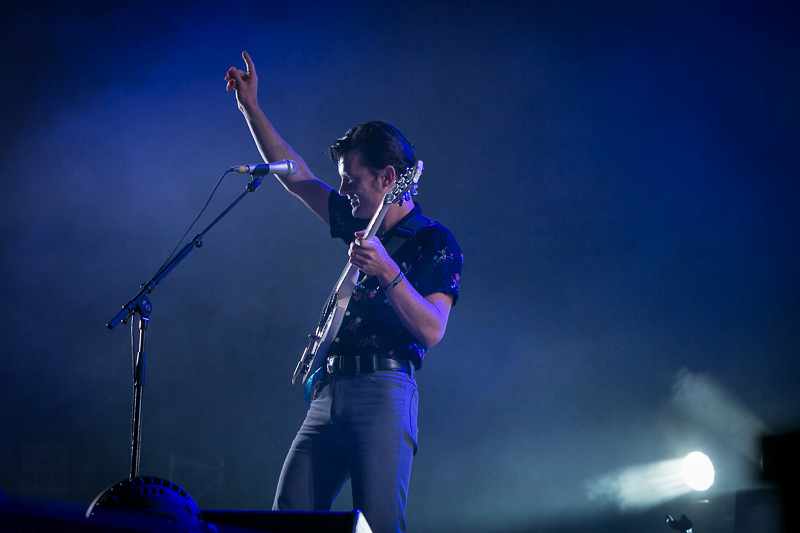 There are three schools of thought on Franz Ferdinand. They are the Glaswegian art school answer to the Strokes with a propensity to stoop to the lyrical laziness of ‘la, la, la’ à la Kylie, a footnote to early noughties post-punk revivalism. They are the blazer/skinny tie donning pioneers at the forefront of the rebirth of British guitar music. Or Franz Ferdinand represent a bloody good collection of influences, from Dr Feelgood to Daft Punk, who tightrope the chasm between plagiarism and peak of innovation.

The band have adopted the final option as their mission statement. They seem comfortable in this identity after over ten years together. They are energised after the existential crisis following two years spent constantly on tour in support of 2009’s album, Tonight. Fresh-faced and re-invigorated, the dark suits and menacing pouts of Tonight’s electro-tinged LCD Soundsystem affectation are consigned to history. In their place is a live unit more in touch with the authentic, original Franz familiar from the early noughties. Alex Kapranos, 41, leaps, bounds and does everything you could ever want from a lead man. He performs, a true rarity in the modern generation. The components of their set are arty-farty, overwrought and over thought, from the especially commissioned stage backdrop to the perfectly realised lighting, yet they combine to create a real spectacle. It is not just a gig, it is a show. As always, Kapranos, the gyrating poser is the main performer, but the band and particularly the lead guitarist, Nick McCarthy, offer strong support. They are at the top of their game as they should be on the final night of their UK tour following six months on the road. There is no evidence of burnout, but a highly wired set mixing the explorative excitement of the fresher material alongside the crowd pleasing maturity of the classics. This translates into the raw power and pure panache of the 100 minute set.

At 23 songs, the set is great value: £1 per song. Offer a live performance of ‘Take Me Out’ in store for a pound and Poundland sales would surely spiral out of control. In the present age of austerity, obscurity is the problem for many of Franz’s contemporaries. Nonetheless, in 2004’s UK Number 3 single, ‘Take Me Out’, the band possess one of the few indie songs of their generation to have penetrated the national consciousness. It is rare in the longevity and breadth of its appeal: covered by the Scissor Sisters and weakly memorialised weekly by ITV’S serious Saturday night drama serial, Take Me Out. It is the preferred anthem of a wasted Paddy McGuinness impersonating ‘lad’ and Franz’s musical zenith to a pompous critic. The depth of the set is the new material’s ability, drawn from 2013’s Right Thoughts, Right Words, Right Action, to sit alongside the powerhouse tunes of Franz’s back catalogue and not be a resounding disappointment by contrast. Take ‘Love Illumination’, Right Thoughts’ reprisal of the ‘Take Me Out’ formula. Despite directly following the original it loses nothing compared to ‘Take Me Out’. Tell the uninitiated ‘Love Illumination’ is the national treasure of ten years vintage and ‘Take Me Out’, the young pretender from last year’s album, they would surely believe you. Such is the strength and impact of the best of the new material.

Seamless transition between different albums and Franz eras is a theme within the set. It is evident in the progression from early dancefloor stomper, 2004’s single ‘Michael’ into ‘The Outsiders’ from 2005 album You Could Have It So Much Better followed by main set closing, 2009 single, ‘Ulysees’. ‘The Outsiders’ provides a truly unique and hopefully patented experience consisting of a drum solo erupting into four man, one drum kit cacophony. One by one each bandmate drops strings and dons sticks to pulverise and mash symbols into symbolic submission. Symbolic because this institution at the conclusion of a Franz gig does not draw the curtain on the main set, but the band return to their instruments and promptly dive via bassist Bob Hardy’s heralding throb into set closer, ‘Ulysees’. Similarly, traditional encore ending ‘This Fire’, in extended glory, rising and falling like a cardiograph from stripped down guitar to flaming furnace of frenzied fire, is followed by newbie, ‘Goodbye Lovers And Friends’. Though apt in title, it does not stand up after ‘This Fire’. But it does reveal a band who remain willing to toy with their set and prioritise the new rather than merely playing the hits to some nostalgia tinged audience frozen in summer 2004.

This attempt at progression while retaining the fan favourites of former Franz glory moulds the gig with a suitable balance between the old and the new. The set is weighted excessively in favour of Right Thoughts… with the inclusion of ‘Fresh Strawberries’, as compelling as the title suggests, and ‘Brief Encounters’, a cautionary tale of middle class dogging. These are not Kapranos’s best songs lyrically, but when the band still find room for the chastening beauty of an ‘Auf Asche’ practically all is nearly forgiven. ‘Evil Eye’ and the South Shields set sea shanty of ‘Stand On The Horizon’ offer variety to Franz’s established sound from rap-rock to choral elegance. ‘Evil Eye’ was used to soundtrack Nissan’s advert for their flagship MPV, the Note, hilariously censored with the lyrics ‘basket’ and ‘schtick’ to replace their naughtier alternatives. And no, this is not some Alan Partridge inspired publicity. BUY CASTROL. But watch the unhinged surrealist horror of the official video for ‘Evil Eye’ and you will agree that Franz Ferdinand are no multi-purpose vehicle, generic and outdated, happy to sit politely in the middle lane churning out the same old sound, but can still cause a stir and attack middle age in the fast lane. One hundred years on from the assassination of one Archduke, this Franz Ferdinand are no footnote to history but keep on evolving.