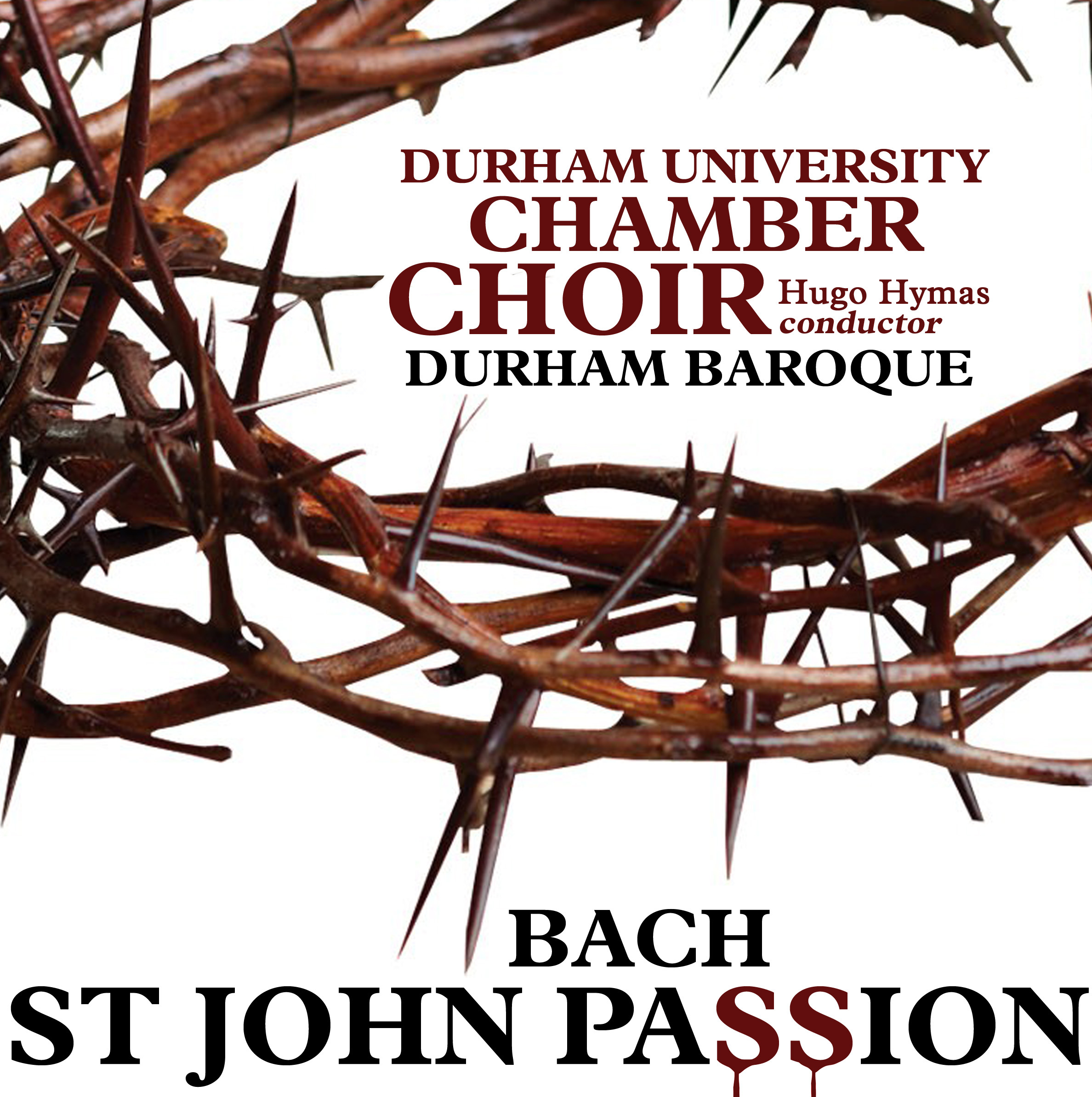 Part of the concert poster.

Durham University Chamber Choir’s most recent concert took place the atmospheric setting of Durham Castle’s Great Hall, the perfect venue for the St. John Passion. Performing this piece is always going to be challenging because it requires lots of talented soloists and and because of its marathon length. Telling the story of the death of Jesus according to the Gospel of John, the piece is divided into 40 sections which can be placed in three main categories: arias, chorales and recitative-like sections. The two biggest roles, that of Jesus and the Evangelist (the narrator) were taken by external soloists, Roderick Williams and Benedict Hymas respectively.

I was extremely impressed with both of the soloists, especially with Roderick Williams who sang with great feeling. This is hardly surprising as he is an established operatic baritone. Getting him to sing at a student concert is a real coup in my opinion, whoever organised that should be congratulated! He was undoubtedly a big draw as the Great Hall was packed and there was a large distribution of ages. He had brilliant vocal power and tone throughout the performance and he really stole the show on his solo sections. However it was a shame that Jesus dies quite a while before the end, meaning that he didn’t have anything to sing for the last half an hour or so. This didn’t take away from his performance though and after seeing him in this concert I would love to see him sing in an opera in the future. Benedict Hymas (the conductor’s brother) was also very good as the Evangelist, he had excellent vocal control and tone. I was impressed with his technique and he brought emotion to his role, which can sometimes be difficult in the really long recitative sections as they can drag. Fortunately he managed to keep me engaged in almost all of these sections.

The choir themselves were stunning in my opinion. The singing in the chorales was sublime with an excellent vocal blend.The opening and closing numbers were especially impressive, from their first entrance they had my full attention. The choir also offered up a wealth of soloists to take the various arias throughout the piece. They were all good, dealing well with the demanding passages and bringing emotion to their roles. I was most impressed by Aaron Prewer-Jenkinson as Pilate, Will Ford who sung the penultimate aria accompanied by the choir and Camilla Harris who sang the final aria. This last performance was really special and set the tone for the closing section of the piece beautifully. However some of the other soloists couldn’t quite be heard over the orchestra and a few times I felt some more volume may have been appropriate. Overall I felt that Chamber Choir lived up to their reputation; they are the best student choir I’ve have seen at my three years in Durham.

The choir and soloists were accompanied by Durham Baroque, a professional period-instrument ensemble. The use of period instruments gave the performance an authentic sound and enhanced the blend of voices and orchestra. However there were some quite noticeable problems with tuning at various points during the performance, especially during some of the arias. I’m not sure if this is due to period instruments being more difficult to play or going out of tune easier but it was quite disappointing and detraced from the performance slightly.

I left the Great Hall suitably impressed. The performance as a whole was very convincing and the addition of such talented guest soloists really lifted it to a level above most student concerts. I would highly recommend going to see Chamber Choir at their next concert.