Powerful: Music in the wake of the Paris attacks.

The horrific instance of terrorism that has shaken the world to its core has also shaken the world of music. Bono, the lead singer of U2, has called this “the first direct hit on music that we’ve had in this so-called War on Terror.” The famed music venue Le Bataclan was one of the areas worst hit by the attack in Paris on Friday 13th November, with at least 89 civilians losing their lives during an Eagles of Death Metal concert. The band’s merchandise manager Nick Alexander was also the first Briton to be confirmed dead in the attack. Happy concertgoers had their lives destroyed in a senseless act of violence, and musicians and fans from across the globe are making a clear stand of solidarity in response. Fans of the band are coming together to try and get Eagles of Death Metal’s cover of Duran Duran’s ‘Save a Prayer’ to the number one spot in the UK chart in order to pay tribute to those who lost their lives; the song is top of the iTunes Rock Chart at the time of writing.

At Imagine Dragons’ Newcastle concert on Saturday night, there were many heartfelt displays of support for those affected by the tragedy. Halfway through their set, the supporting act Sunset Suns dedicated their song ‘Lost Company’ to France, with the lyrics ‘We’re all survivors, we live for a better day’ feeling particularly apt. This was followed up by the headliners themselves, as they came on stage to a tricolour light design, the red, white and blue of the French flag blazing behind the band as frontman Dan Reynolds promptly declared a moment of silence before they performed, to honour those who lost their lives in the attacks. Watching an arena full of enthusiastic concertgoers brought to silence (a rare and impressive feat in itself) was one of the most moving experiences of my life. Everyone was there for the music, and nothing was going to stop us, but I am sure there was a niggle of fear, and sheer sadness, in more than one person’s mind, thinking back to the atrocious scenes at Le Bataclan. This recognition from the band itself meant the world. Later in the show, Dan expressed his joy in seeing such a large audience, as he expected very few people to come due to the circumstances, but said this showed how resilient and united mankind is in the face of this terror, proclaiming “We will not be controlled by fear. We will not be controlled by anyone.”

Tributes have also poured in from other artists through performances, official statements and social media alike, and it is clear that they all send their thoughts and prayers to those affected. Coldplay performed a cover of John Lennon’s ‘Imagine’ in LA on the night of the attacks, echoed by Davide Martello, who played the same song on a piano outside Le Bataclan itself on Saturday morning. Many others in the music industry have understandably cancelled gigs in Paris as both a mark of respect and to ensure safety, such as U2, Braids, Bondax and Motorhead. On Monday, the metal band Deftones were due to play the very same venue where the attack took place for a three-day run, but this too will not go ahead. Foo Fighters have also cancelled the remainder of their European tour, including events in Italy, France and Spain.

Sickeningly, in their statement claiming responsibility for the attack ISIS stated that those at the concert on Friday night were “idolaters […] together in a party of perversity”. But as music lovers and compassionate humans we must acknowledge the falsity in this lunatic claim and refuse to be dictated to by these terrorists. Live gigs are not an ‘idolatrous perversion’; concerts are meant to be a safe space where people can share in the beauty of music and lyrics, and we must ensure that this is not forgotten.

At the end of the Imagine Dragons set, Dan Reynolds asked for one thing from his audience: “Let us go out and spread love… Be respectful of all faiths [and] nationalities… These things are meaningless. We are all just one.” It wasn’t the music that I took away from that evening, but this very sentiment. It proves how powerful music can be in the face of unknown horrors; I left feeling just that little bit less afraid because of our solidarity. When we are united, be that at a concert, in front of the tricolour at Durham Cathedral, at a vigil or just through thought, we know that the terrorists cannot win.

To anyone, anywhere, who has suffered at the hands of terrorists, from Paris to Beirut, Baghdad to Kenya. We stand by you. 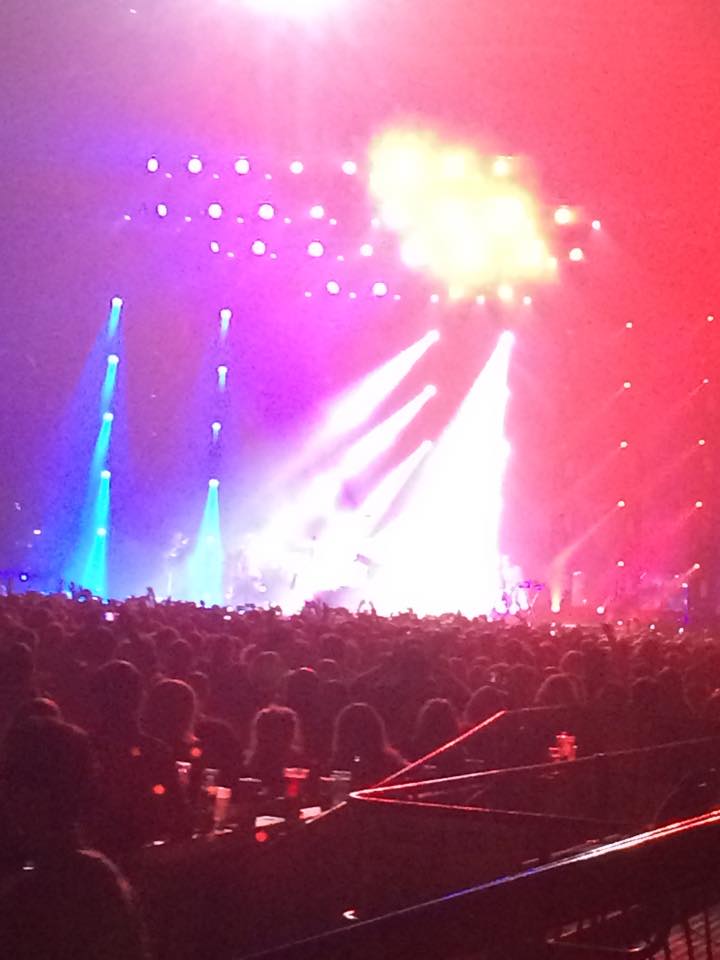