Peter Reed’s Top 10 Albums Part 4: CHVRCHES – ‘The Bones of What You Believe’ 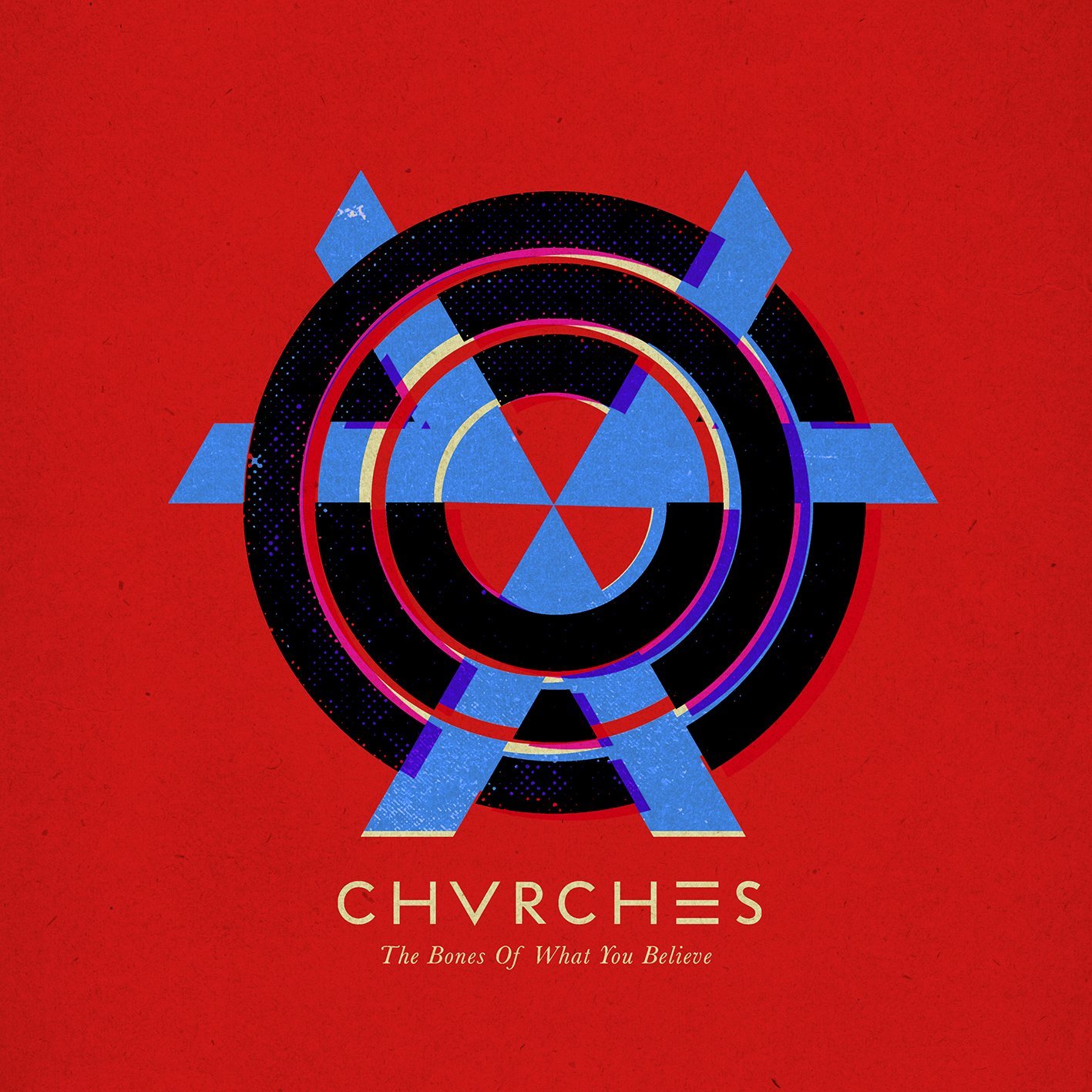 CHVRCHES – The Bones of What You Believe

By now everybody here at Durham University will have noticed that in the winter, Durham is a city of eternal darkness. The sun sort of rises at about ten and promptly drops back below the horizon at half three if we’re lucky. In the middle of this icy winter, last year, I received a rare family visit (as I’m from Portsmouth so it’s a fair way to travel.) My grandparents came up as well. We spent that Wednesday afternoon going on an odyssey to South Tyneside, where my grandparents, and briefly my mother, grew up.

Not gonna lie, but Hebburn and Jarrow are pretty grim places to have to live. The blow dealt to heavy industry by Thatcher fell hardest here and the atmosphere couldn’t be more gloomy if Eeyore was chief councillor. After a tour of patches of wasteland where the terraces my grandparents once lived in used to stand, we trundled over to South Shields for an ice cream. Not an obvious choice but there’s a quite good ice cream parlour on the seafront that’s worth going to (in fact, South Shields is generally alright and worth a day out from Durham if the weather’s warm).

At this point the sun was going down and there was a very strange quality to the light. There were storm clouds looming out over the North Sea being lit up by the sunset. There was even a rainbow. I know because I took a photo of it. I’ve lived near the sea all my life and I can tell you for a fact that different bits of sea have distinctly different vibes. It’s hard to explain, it’s more a feeling. Norway and Denmark are a long, long way away from Britain compared to France, and compared to the small, busy stretch of water between Hampshire and the Isle of Wight (called the Solent if you need it for pub quizzes) the North Sea feels vast and desolate.

Why has this particular snapshot and feeling lodged so firmly in my memory? Well, I firmly believe (and I think it’s been proven but I can’t be bothered to cite a study) that music, and the time and place you first hear it, leads to a permanent association in one’s mind. And the night before I found myself on South Shields seafront with the icy wind biting at me, I listened to The Bones of What You Believe for the first time.

Fact attack time: Chvrches are by quite a long way the newest band on my list; coming to the world of music late I spent a lot of time becoming acquainted with the classics first so as a result the albums that have stayed with me tend to be older ones. They are a Glaswegian, three-piece electronic band. The unusual name was picked deliberately so that it would be the first thing that came up when somebody googled it. They came to my attention with a performance on Jools Holland[*]. “The Bones of What You Believe” is to date (Jan 2015) their only album.

It’s very rare for me to listen to an album first time and think every single song is fantastic. I tend to approach music I haven’t listened to before with a level of scepticism, but Chvrches managed to pull off the feat. And how. The album is forty-eight minutes of shuddering, multi-layered, icy synths, with the reverb turned up to eleven. It’s like a cathedral of sound, a big cathedral with lots of corners for you to get lost in. The best bit, though, and the most unusual part, is that on a lot of these songs this decidedly twenty-first century setup has been spliced together with ancient celtic melodies. There’s not a shadow of a doubt, listening to the album, that it is of Scottish origin.

The first note of the album comes whistling out of the nothingness like that icy north sea wind. In fact, you might well have heard the opening track, “The Mother We Share,” as the BBC seem to rather like it. It’s had fairly regular rotation on radio and was used quite a lot as incidental music during the Commonwealth Games (them being from Glasgow and also quite good and all.) The celtic slant is most obvious on this track. It’s echoey and resonant (I quite like reverb, in case you hadn’t noticed.) And the singing. Singer Lauren Mayberry’s voice retains quite an obvious accent, but sounds almost childlike, which clashes starkly with the venom the songs deliver.

With “Tether” we have a marked difference; it being a huge crash after the up-tempo high of the first three songs. Mayberry’s voice comes echoing from far away, as if she’s in a different part of the cathedral, with a lot of the sound deep down in the bass register (this album’ll be lost on you if you listen to it through those shit little earbuds, got to be honest.) The sound is vast and unfathomable. Halfway through the song there’s a spectacular… I don’t know, would you call it a drop? Out of nowhere, this fantastic euphoric arpeggiated melody comes flying at you like a duck on amphetamines.

Chvrches aren’t a one-trick pony, however. Whilst the fantastic singles “Lies” and “Recover” are more of the same, between them we get “Under the Tide”, where band member Martin Doherty takes up the microphone above a buzzing, bubbling bassline. “Night Sky” perfectly blends some sharp, fresh guitar in with all the synthesisers, courtesy of third member of the trio Iain Cook. It segues smoothly into “Science/Visions”, which is a darker-sounding track with Cook and Doherty chanting in a quasi-monastic-slash-robotic fashion; and also a description of what I experience in the chemistry lab if I accidentally get a lungful of one of the more potent solvents.

Speaking of Lungs, that is the name of the next track, still lyrically venomous but sounding more cheerful with a certain playfulness to the rhythm of the melody. Mayberry has called it her favourite song on the album to sing live. Penultimate track “By the Throat” is another fabulous one, with what definitely can be called a drop leading to a lovely arpeggio of sound like a thousand shimmering ice blue fireflies flittering in every direction. Fireflies? Gosh, sometimes I wonder whether or not I have a touch of synesthesia[†].

One of the issues with this album is it’s difficult to pick a standout track because the standard is so very high. However the album’s closer, “You Caught the Light,” does stand out, mainly for its difference to the rest of the album. It might well be my favourite track. It opens with a long, slow whistling tone, like that North Sea wind again, followed by a trio of notes that echo spectacularly. Like some sort of signal borne on the wind. Then a guitar and a bass come in bringing texture. Doherty sings on this track, his voice echoing, lamenting, from far away. And SO MUCH ECHO. It’s like having some sort of echo-gasm. A cathedral of sound isn’t big enough for this track; it needs to be outside, by a loch or a fjord or something under a night sky filled with thunderclouds like those gigantic ones out to sea by South Shields. If, to me, “By the Throat” sounds like blue fireflies then “You Caught The Light” is like the aurora. Huge and unfathomable. In fact, I must add that to my bucket list. Go and see the Northern Lights, and when you see them, listen to this song.

I do like a strong closing track on an album; I think it’s very important to leave the listener feeling a bit awed and special for having listened to it, and Chvrches certainly managed the feat.

So, yes. It’s an album that, despite being less than a year old, managed to get itself a place in my consciousness worthy of being on my top ten list, mainly because it’s connected in my head to being in the North East. I should mention that it’s also particularly connected to Newcastle in my head, because I was lucky enough to see them there in March. Good grief, they were loud. But oh so very good. Particularly luckily, they’d just added “You Caught the Light” to their setlist. The bass in the verse parts was so powerful that the hairs on my arms were caught in the breeze from the speakers. Though they’d probably have been standing up anyway. Fantastic gig. Also, I spotted a friend in the row in front and ended up having a chat with her while Lauren Mayberry sang “Gun” not three metres away. It felt frightfully rude, actually. Sorry Lauren.

People talk a lot about songs of the summer. You don’t tend to hear about winter songs though. The Bones of What You Believe is, to my ears, absolutely and definitively a winter album – I’ve barely listened to it all summer because it feels so incongruous with hot, bright days. It’s shown me, especially, that electronic music can be really, really good. It’s soundtracked my long, dark winter in Durham and my time here and always will and I’m thoroughly looking forward to blowing the metaphorical dust off it ready for another winter of intense listening. Another one in my top ten.

Do you like videos? I like videos. And for video time today I’ve picked out a performance of Night Sky, which is probably my other favourite song on the album. Mayberry and Doherty have a bit of a duet going on, and Cook has what looks like a lot of fun on the guitar. Also I’d like to applaud the germans on how cinematically they managed to film the performance.

[*] which incidentally I think is a GREAT show; in fact I have another set of articles on it that you’re welcome to go and read as well.

[†] Synesthesia’s that condition where people perceive one sense as the idea of another, e.g. hearing sounds as colours. It feels particularly strong on this album for me; Science/Visions would definitely be acid green and black and Tether a kind of deep indigo. Aside from anything else it’d make designing lighting displays very easy.