It’s time for my tenth and final album, completing my set of top ten albums. However, this last one is a bit different. It’s a very tenuous addition to my list because it’s the only album on it that was never actually released. If it had, it would probably have been the best album ever made full stop. I’ve broken my own rules here because Lifehouse is less of an album that’s stayed with me over time, but more in that it is the album I have the most respect for – and also I suppose it reflects a chunk of my personality: grand project-mongering, only some of which comes to fruition. Although, hey, I managed to write all these articles, didn’t I?

Hang on, I hear you cry. If it was never released, how can it be one of your top ten? Well, it’s a fairly long story, let me explain.

When I reviewed Quadrophenia I mentioned that the Who became megastars with their rock opera “Tommy”. Following up a megahit like that is always quite difficult and daunting for a songwriter and Pete Townshend was by no means an exception. The plan he came up with for the followup sounded pretty damn cool, and was to be his masterpiece, titled “Lifehouse”.

Firstly, Pete Townshend’s unrealised magnum opus predicted the modern internet, which very few people managed, A rock opera like Tommy, it is basically about humanity being plugged into a giant soulless mainframe to live out their lives in sterile purgatory blindly being fed crap off YouTube to keep them sane. Then a guy in London has an idea of having a massive rock concert to set everyone free, a Scottish farmer hears about it and his daughter decided to run away and go to it, and the farmer goes looking for her.

Then it got weird. What, you mean it wasn’t weird already? Oh no, it went to a whole new level of weird.

Townshend tried to use the project to find God, or Nirvana, or something. Part of the concept was that a song could be generated that represented a person. Playing the song of every human on earth simultaneously would open a portal to heaven, or something (or at least generate a sound that accurately represented the whole of humanity, which in itself would be pretty cool.) Obviously the whole plan came crashing down around Townshend’s ears and he had a nervous breakdown. But not before he’d written all the songs that were supposed to be on the album. (Townshend’s software system for creating music based on a person has since been developed and the results released quietly as Method Music, attributed to composer/programmer Lawrence Ball. The results are… interesting.)

The album itself lay in rubble. The rest of the band and the record company sifted through it, picking out the best songs, which they released as the album Who’s Next – an album awarded five stars or equivalent by almost every publication that reviewed it and considered part of the holy trinity of rock and roll (according to some critics anyway). The songs weren’t put on the album in narrative order, making them all work as standalones – such was their strength, that they could.

However, all the songs on Lifehouse have been recorded at some point or another. Many sporadically appeared as singles and B-sides between albums throughout the seventies; others appeared on later albums, in particular on “Who Are You”. Many appeared as bonus tracks on the CD reissue of “Who’s Next”. The final gaps in the album, four missing songs, were plugged by Townshend in 2000 when he released new demo recordings of the full album – along with the tracklisting. This meant that with a bit of investigative work I was able to track down all the songs on the album and assemble it myself and listen to it. 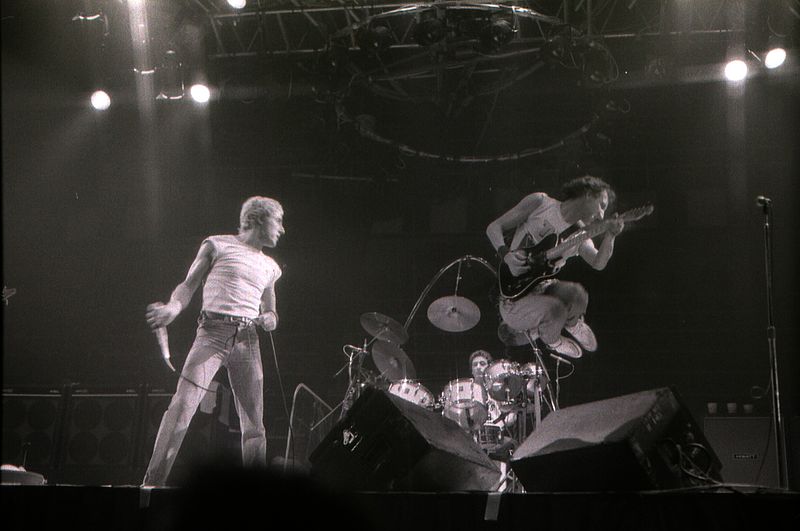 I can confirm that, as a whole album, it works. Beautifully. The narrative, lost when the songs were released independently, suddenly emerges. Musically they work together as they were all the product of the same writing sessions and mostly the same recording sessions as well. However, more to the point… They are really good songs. As Lifehouse is a two-hour album comprising twenty-four songs I shan’t go into excruciating detail on each songs like I’ve done so far, I’ll have to sweep through.

The first half sets everything up for the massive concert set to take place to free humanity. Opening is “Teenage Wastlend,” a total re-work of Who classic “Baba O’Riley”. It shares many lyrics but takes a very minor tone compared to “Baba”’s euphoria – as one of Townshend’s demos it feels a little empty without the rest of the Who’s thunder and lightning. Nevertheless it sets the scene – in grim, postapocalyptic Scotland (thank you very much, Salmond! – DELETE IF NO VOTE WINS) where life is hard. Ray, his wife Sally and daughter Mary live rough in a caravan. Ray seems to enjoy life though, set up by the free-flying acoustic-rock song “Going Mobile”. “Baba O’Riley” itself is a belter of a song, Daltrey howling over the digital spasm of Townshend’s keyboards.

More top notch acoustic rockers with “Time is Passing” and “Love Ain’t For Keeping”. They merrily, strummily maintain the status quo in Ray’s cosy life. But then daughter Mary runs away, so Ray vows to find her with heavy rocker “Bargain”. Townshend’s rhythm playing leaps along backing up the speed and urgency of Daltrey’s singing.

Hugely underrated ballad “Too Much of Anything” follows, my favourite non-single on the album. Daltrey sings with touching vulnerability. An abrupt change of sound begins “Music Must Change” – this is because this song was recorded later for inclusion on “Who Are You,” but no matter, the narrative has switched to a new character – London-based hacker Bob, who has rediscovered 20th century rock and is planning his giant concert. The unintentional sonic change reflects the character swap, and “Music Must Change” with its more ambitious structure still fits and sounds great.

The next two tracks, “Greyhound Girl” and “Mary”, are both Townshend demos. Sensibly in the absence of the rest of the band they mostly rely on Townshend’s acoustic playing and his more soulful voice. For supposed demos they’re surprisingly strong, both dealing with Bob’s guilt-laden relationship he begins with runaway Mary.

“Behind Blue Eyes,” the Who’s number one self-pity ballad with its fragile acoustic opening and angry thrashing middle section makes its welcome appearance, followed by a long (looong) “Baba O’Riley” instrumental reprise. The last demo track, Keith Moon’s drumming is sorely missed compared to Townshend’s beginner-level skills but the keyboard wizardry is faultless. Personally I think the album didn’t need this, in much the same way that “Tommy” didn’t need its ten-minute intermission “Underture”. But, you know, Townshend’s the boss. The first half of the album is finished up with “Sister Disco,” one of the more elaborate “Who Are You” tracks, with its jittery keyboards echoing “Baba”.

The second half of the album deals with the Lifehouse concert itself, and Ray’s desperate attempts to find it. It starts with harmonica-heavy “I Don’t Even Know Myself” with its jaunty, out-of-place vaudeville chorus; and slow groovy rocker “Put the Money Down” with its twangy synthesisers.

Then comes “Pure and Easy,” that directly deals with Townshend’s “ultimate note”/nirvana theory, making it one of the most important songs to the narrative. Musically, it sounds more like some of the older Who tracks. Then, one of my favourite songs on the album, heavy-bottomed ballad “Getting in Tune” with its lovely lyrics and equally lovely piano intro.

Piano-heavy rocker “Let’s See Action” gets the concert up and running. It closes with a fabulous multilayered vocal coda. “Slip Kid” is an anthem for pessimists, starting of fairly normally, it breaks to a very slow bowing guitar solo, sounding more like a violin. It uses a very moving chord sequence in contrast to the upbeat rest of the song.

“Relay” is a fantastic rocker, released as a standalone single and doing quite well, featuring guitars fed through heavy electronic effects on top of normal acoustic and electric guitars. It stamps along like a classic Who rocker but very notably, it’s a song about the internet. But written in 1971. Take that, sci-fi writers, Townshend’s guess was RIGHT.

Top hit “Who Are You” next, inspired by Townshend’s alcoholism as much as anything. Buzzy keyboards, heavy guitars and a very catchy chorus, like a choir of owls. Who-who, who-who. “Join Together” comes next – nearly there! – with potentially anthemic status but missed the mark somehow. “Jooiin Together, Jooiin together, jooiin together with the band!” Very catchy, in fact, but perhaps sounds a little like a Christian rock song.

Nothing about the next song misses the mark: “Won’t Get Fooled Again,” aka the one they play on that episode of “The Simpsons”, a-aka the CSI: Miami theme song. Possibly the Who’s signature song, constantly on the radio, it’s an anthem on the futility of revolutions. Perhaps the Arab Spring countries would have done well to listen to it (WHOA POLITICS.) Heavy driving guitars, angular organs running throughout and Daltrey unleashing some ear-splitting screams. Set against Lifehouse’s fascist government, it works probably best of all the songs on the album.

The last song, “The Song is Over,” is a reflective ballad summing up the whole album. Oh goody, a strong closer. It was probably was most in need of being a part of Lifehouse rather than Who’s Next as it makes much more sense in context. (Ray got to the concert too late to stop Mary transcending, by the by. Downer ending, I know.) It quotes “Pure and Easy” over Keith Moon’s closing drum solo (which made no sense on Who’s Next) and has the finality of a good closing song.

Lifehouse is a set of incredible songs. The album, however, when assembled, is so much more than the sum of its parts. It’s the Who’s magnum opus, without a doubt; as impressive as Quadrophenia but more ambitious. It’s a pity that only those willing to trace all the tracks and assemble them are able to hear it. It proudly takes the final place in my top ten, but it certainly remains one of music’s great “what if?”s.

Final video collection. I wanted to show you a magnificent rendition of “Getting In Tune” featuring Eddie “Pearl Jam” Vedder on vocals, but sadly it was left off the live DVD so hasn’t found its way online. “Relay” however, is on Youtube, as part of the full concert. Pete even talks a bit about Lifehouse beforehand. Here it is, already wound forward to the right bit for you ☺