Outside the Bubble: tUnE-yArDs at The Cockpit 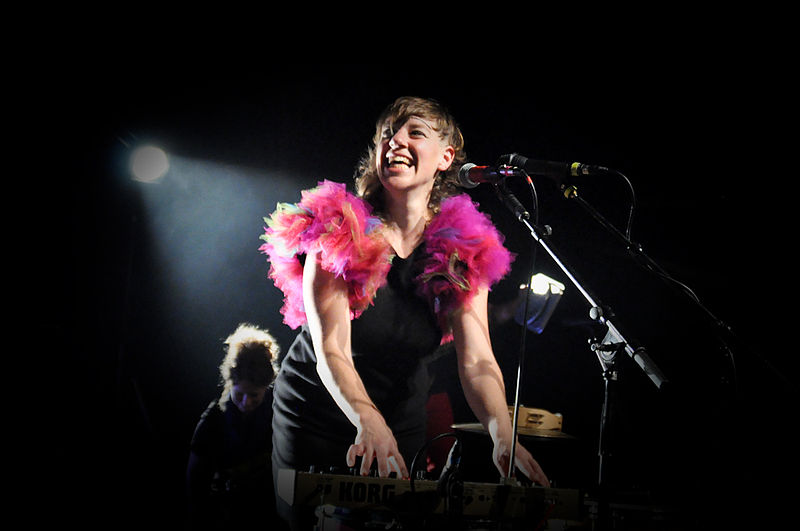 A dodgy looking bloke with a baseball cap and bum bag full of cash hands me a pound change for my £15. I get a “how old are you?” from the miserable guy on the door, my accepted response of “twenty” earns me a stamp on the hand and completes my very unofficial-feeling entry to the venue. Arriving half way into the opening act’s set, who I later found out to be ‘Galaxians’, I didn’t seem to have missed much. They’re a bit like Daft Punk, only not, and one of their tracks feels very similar to the sort of ‘funky pop’ that you can catch on an old 70s episode of Top of the Pops: I can’t help but to burst into laughter. There are some live drums and an admittedly very talented keyboardist on stage, but their overall presence is close to zero. They leave no lasting impression.

They exit, and the stage starts to fill up with all sorts of musical toys that in a short while the main act will be able to get their hands on; things to hit, things to press, things to strum. The Cockpit, a Leeds venue situated under the arch of a railway bridge (you can hear the trains go by above your head every so often), starts to fill. By the time the band enters, in their fluorescent tribal-like dress and UV face paints, it’s full-to-bursting.

Merrill Garbus, who for many ‘is’ tUnE-yArDs, starts by appearing to fit her whole mouth around the edges of the microphone and letting out a squeal.

The room goes silent for a moment, then the rhythms start. Merrill has two drums that she plays throughout, there’s a separate drummer, and two other colourful characters at the back whose job it seems is to dance, clap, sing and be happy – a fine job they do at it too. In stark contrast to this energetic quartet of merry women is the rather stationary bass player, the only male on stage. His clothing is as vibrant as the rest, sporting a red and blue patterned short sleeved shirt, Aladdin Sane-like face markings and curly quiffed up hair. His demeanour couldn’t be any different: his shoulders stay as square as they started throughout the entirety of the night, his eyes fixated on his instrument, his lips remain completely parallel to the floor. I do like the contrast though; he was a pretty slick bass player too.

The first song is “Left Behind”, a track from their new album Nikki Nack, the crowd start head bobbing and swaying. The band’s super tight, with Merrill’s voice worth the entrance fee alone; the beats are everywhere at once, but they all seem to fit in together somehow. “Hey Life” proves just as brilliant. The venue is suitably warmed up.

“Real Thing” mixes a Destiny’s Child verse, supplied by brilliant live vocal harmonies, with a ‘joy explosion’ of a chorus, a common feature for many tUnE-yArDs tracks. These explosions work so well in front of a mass of people; her ferociousness sends an indescribable rush down the blood stream, compelling the room into a voodoo dancing frenzy. The rhythms keep on coming and the crowd keeps on going and everyone’s smiles keep widening. This brand of afrobeat that is distinctively tUnE- yArDs doesn’t vary much between songs; they change in melody and lyric content, but not in style. I guess there are far worse places to be stuck musically, and the audience never get tired of it – my hour and a half flew by.

It brings such a pleasure to see and experience all this happening a few feet away from your eyes. A unique group of musicians playing songs that seem to fit only with their talents; I can’t see anyone covering them any time soon. Their songs on record sound about as impossible live as you could get, but sure as hell do they manage to pull it off. It requires everyone to be doing multiple things at once. The percussionist’s arms are everywhere, all the time; the bassist also dabbles in keyboard; the two at the backing are dancing and clapping throughout. Everyone provides backing vocal, and all can sing it would seem.

The hits from w h o k i l l prove to be the highlights. Everyone makes a siren noise for “gangsta”, a recording of the crowd’s contribution is then looped, and over which the rest of the song is played. The drums enter and then suddenly stop, as Merrill screams out unaccompanied “What’s a boy to do if he’ll never be a gangsta?” “Bizness” works immeasurably well, the haunting A cappella vocals are recorded live, on top of which Merrill tears through bluesy vocals, and the audience transforms into a mass of moving bodies. She shows off the remarkable scope of her vocals in the beautiful “Powa”, where she also demonstrates that she can play a ukulele like a guitar goddess.

The Cockpit are boisterous and in good spirits all evening, a heckle of “speed it up” whilst the band are busy setting up the loops between songs forces Merrill to break down with laughter, a joke from another who simply shouts “The TUNE yards” whilst the strings of a ukulele are being altered on stage receives a groan, albeit a light-hearted one. Confusion spreads when Merrill starts to describe the Thornton’s Arcade in order to find out its name, “you mean the Corn Exchange?” someone queries in a thick Yorkshire accent. “Its lovely town” she concludes, “It’s a City!” someone shouts back. At one point during an extended pause in the middle of a song a girl, faced with the image of the whole band staring out menacingly into the distance with their wide eyes and wicked smiles, screams out: “It makes no sense!” Valid, but it’s so much fun anyway. Pure, meticulously planned fun.

After a triumphant rendition of “Water Fountain”, tUnE-yArDs exit to a deafening show of appreciation. Their choice to come back to play two more songs is warmly approved of.

This is a band that’s fantastic on record, but are another level on stage. A whole new dimension is added; you can see the sweat pouring as a result of their relentless energy, and everything feels so wonderfully alive. Put simply: tUnE-yArDs are a band to be experienced and not just simply listened to.