Outside the Bubble: Leeds busker Dave Pilla’s EP ‘More Than Hoped For’ 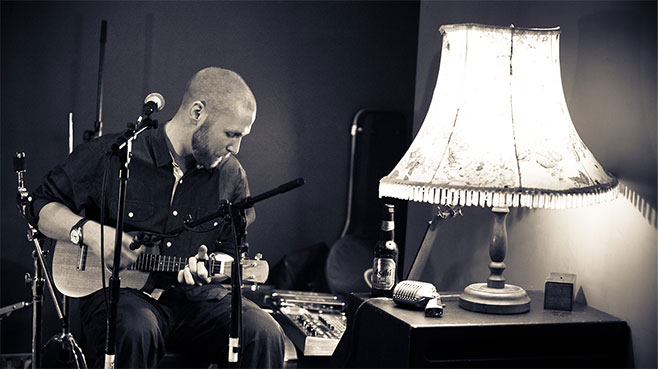 At first glance you’d be right to think that Dave Pilla doesn’t cut the most intimidating profile. Devoid of capital letters, his name is nestled in the top corner of his EP artwork, a name that incidentally doesn’t exactly produce much music of its own considering Pilla’s myriad musical talents. But don’t let his markedly unshowbiz front fool you. Pilla first cut his teeth as one half of the Pilla duo with friend Richard Bower that later grew into a 5-piece band. Unfortunately after a brief stint of fame, making it to the Unsigned Stage at Leeds fest 2005 the band eventually split. Pilla now works as a part time busker in Leeds, winding his way through the streets of Leeds, careful not to play anywhere too long for fear of boring any regulars to that area – not that he could bore anyone. It’s clear that he’s found his real passion in busking and, by his own admission, hasn’t looked back since. His presence is gradually being felt in his home town of Leeds and you can see why a loyal fan base is steadily beginning to grow. Pilla’s gratitude towards and awareness of his audience is as endearingly professional as it is warmingly green. His blog is awash with posts of gratitude, thanking the multiple listeners who have approached him with an offering of a couple of quid, the purchase of an EP or even a hand drawing. There’s something spectacularly refreshing in the modes by which you can discover this man; absent from iTunes and notably lacking a record label, Pilla is very much his own man. Indeed, if after reading this you wish to contact him you can get hold of him through his personal email showcased on his website, hand crafted, of course, by the man himself.

While it would be too great a statement to call him ‘man of the people’, you can’t deny that the songs he crafts are definitely made by, and for, the people. His absence from iTunes belies the distinct and undeniable presence of humanity in his work. He isn’t a Single of the Week, he isn’t recommended by Vevo. If you are lucky enough to find him, you discover him personally, on your own terms, as one human finding another. And while the fact this man remains absent from the mainstream music market is nothing short of ridiculous, after listening to his music, the paucity of his following doesn’t upset me at all. Standing just outside of the general chaos of the music industry, Pilla is afforded the distinct privilege of being rendered a bastion of honesty and authenticity; there’s no agenda, no number one in mind, just beautiful harmonies and revealing lyrics. Elevated beyond his peers, Pilla achieves something that his more mainstream alternatives simply cannot; a hand reaches out and takes yours every time you press play on this album. There is an undeniable sense of belonging to his music, as if every track was written for you alone. This album is a raw insight into the painful realities of what it means to say goodbye to those you love.

I first came across Dave Pilla in an anonymous square in Leeds city centre. I found myself outside a coffee shop, nursing a cup of tea, licking my wounds from a particularly public breakup, soundlessly replaying every moment and conversation in my head wishing I could take it all back. As the drizzle sets in and the tea grows increasingly lukewarm, a man quietly opens a guitar case, turns on an amp and begins to play. Immediately the grey sky and the drizzle began to lift. A song, one I’ve come to know as Hollow Days, resonates through the square. This one remains my favourite. The lyrics, harmonies, and guitar accompaniment achieve a wonderful sense of catharsis in the songs final crescendo. The repeated punctuations of silence in the guitar accompaniment lift the track and make it so much more interesting and heartfelt. If I could liken the moments where Pilla holds back and allows silence to ring through his sound, it would be the moment your crying descends into breathless, uncontrollable sobbing. Echoes of the song ‘Girl’ (The Beatles) are brought to life in the moments where Pilla’s inhale and exhale is audible. Yes, the studio version is great but my God, hearing him in that street in Leeds is my favourite musical moment from him. For the same reason Pilla doesn’t belong on iTunes, he doesn’t really belong on a CD player either. To experience the sheer eye stinging brilliance of Pilla you have to hear him live and luckily there are more 2014 gig dates to be confirmed later this year.

This EP has come to mean so much more to me than the five pounds Pilla asked for on that wet afternoon in Leeds. It’s an EP that was designed with the very intention of making you cry but in a really, really great way. ‘More Than Hoped For’ is the perfect antidote to heartbreak. So if you want my advice, find yourself a scoundrel, then go find Dave Pilla.