Outside the Bubble: Arcade Fire at the Barclays Center

It’s a sweltering August evening and I’m working my way through hectic traffic in the downtown Brooklyn rush hour, thankful that I chose to ignore tonight’s dress code of ‘black tie or fancy dress’. The rest of the gig-going crowd have also chosen overwhelmingly to ignore Arcade Fire’s controversial request, save for a few suited individuals and a giant carrot.

The first support act arrives at the Barclays Center minutes before the doors are even set to open – a mariachi band who distinguish themselves as an official part of the event by virtue of not being moved swiftly on by security. They work their way through a few folk songs and then shuffle off into the building, presumably to enjoy their payment of front row tickets to the actual gig. Soon after the rest of the crowd is allowed inside, and I take my place in the arena, seemingly miles back from the stage to watch every person who trickles in over the next two hours claim a better seat.

A giant white screen descends behind the stage, showing tweets from the audience about the night. They range from inane posts about how some member is ‘looking forward to the show J’ (you would hope so at 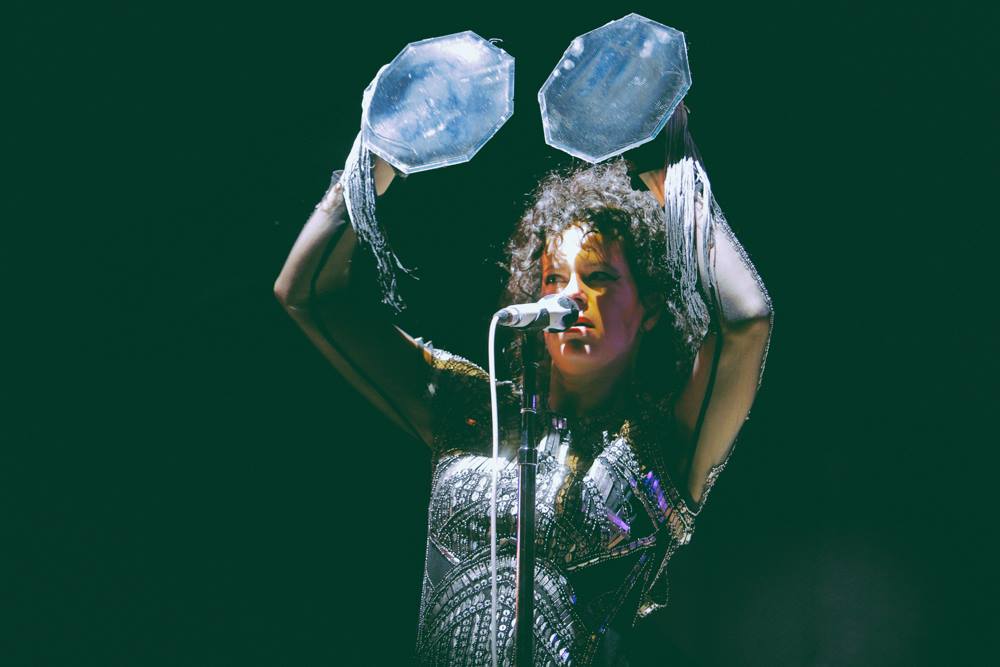 60 per ticket) to teases about guest appearances from Moby and Kanye West, which sadly never materialise. The screen changes to what appears to be a Windows 98 screensaver, revealed as a display for The Unicorns, our second band on the line-up. The geeky Montreal rockers perform a fun, colourful set, and what they lack in memorable hooks they make up for in humorous, tongue-in-cheek lyrics: ‘we’re the unicorns / We’re more than horses’ begins one triumphant chorus.

The next act, by contrast, see the lights dimmed, and enter dressed all in black, breaking into a more straightforward, no frills set. The aging men in front of me, looking less like cutting edge rock stars than Doc Brown from Back to the Future, are seminal ‘70s band Television. They play through classic tracks with remarkable tightness for a group whose heyday was forty years ago, and their extended, jazz-inspired jamming still sounds unique and incredible. The sole heckler of the night shouts ‘play Marquee Moon’ across the arena, and he is answered with a note-perfect rendition of the band’s crowning achievement, a song that Arcade Fire frontman Win Butler reveals at the end of the gig he has ‘listened to 1,000 times’.

Follow-up act Dan Deacon appears almost straight away once Television have left the stage, questioning how on earth he could compete with that, and inevitably he can’t. He wisely chooses to do the opposite of whatever the audience just witnessed, bringing out lights and lasers for a selection of electronic dance music infused with his own weird vocal arrangements. In between songs he cracks jokes and sets up dance routines in the pit involving oversized carrot and friends. It’s fun, but feels like I’ve stumbled into a Bar Mitzvah blown up to arena level.

After two hours of build-up, Arcade Fire finally come on for their headline set. Normally angsty-looking frontman Win Butler enters with an uncharacteristic grin on his face, and as he leads his band through the excited crowd I stare longingly from my tiered seating, feeling even further away from the action. However, as soon as the huge ensemble open with ‘Reflektor’ I am hooked, all areas of the arena drawn in as subwoofers and disco lights descend around the building.

This spectacle isn’t a one-off, and throughout the evening we witness flashbulb cameras surround the band for ‘Flashbulb Eyes’, transvestite dancers rock out to ‘We Exist’, and even holographic ghosts stop by for ‘Afterlife’. It’s never gimmicky however, and it all adds to the carnival-esque atmosphere of the evening. The band’s older songs receive less attention in terms of flashy stage effects, but tracks like ‘Rebellion (Lies)’ are nevertheless updated and given a funkier edge to fit with their newer style. 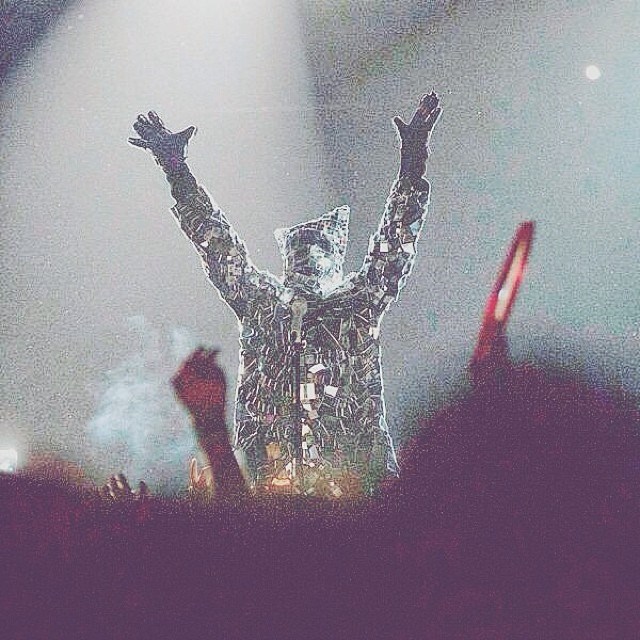 Overall, the set is consistently strong, with highlight after highlight serving as a reminder of the strength of Arcade Fire’s back catalogue. Almost every song has a hummable or sing along part, and the instrumentation is beefed up for the live show – Funeral track ‘Haiti’ gets a pair of Caribbean drummers, and the amped up guitars on ‘Normal Person’ have the crowd going crazy every time the chorus hits. The live show also sees Debbie Harry meets Helena Bonham Carter vocalist Régine Chassagne given more prominence. When she’s not belting out show-stoppers like the ABBA-esque ‘Sprawl II (Mountains Beyond Mountains), she dances round the stage, waving coloured ribbons and oozing charisma with childlike excitement.

The night ultimately only reveals one misfire – ‘Rococo’ while hardly a terrible song, is pretty minor Arcade Fire, and an inexplicable inclusion on the setlist when classics like ‘Keep the Car Running’ are missed off (most of Neon Bible, except for ‘No Cars Go’, is neglected in favour of the band’s better three albums). The rest of the audience seems to agree, with a few people sitting down for a rest during the song.

However, the momentum picks up again quickly, with the traditional special guest arriving during the encore for one last surprise. Tonight it’s Talking Heads legend David Byrne performing a Suicide cover, before Arcade Fire settle down for classic ‘Wake Up’. At their epic, Springsteenian best, the group close out the show, the audience singing along and walking out slowly as a jazz rendition ingrains the track into their heads, and if anything’s going to be a measure of the gig’s success it’s the amount of unsynchronised whistling during the post-show toilet rush.

Win Butler claims at the beginning of ‘Normal Person’ not to know if he likes rock and roll music any more, but judging from the Reflektor tour he sure can play it. A spectacular evening by a band at their peak.