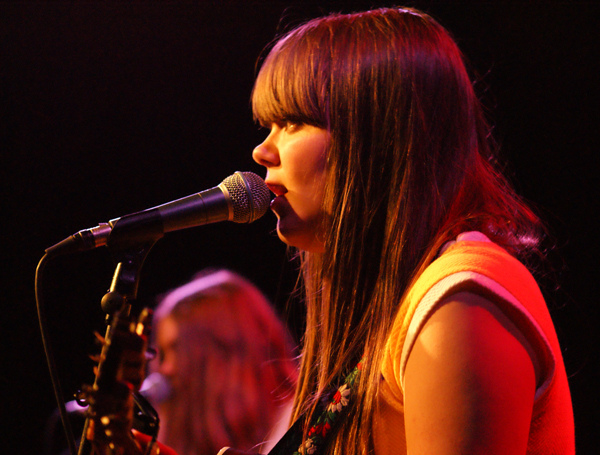 In 1974 the Swedish group ABBA won the Eurovision Song Contest, that year hosted in the UK, and then went on to reach dizzying heights of fame amongst adoring fans across the globe, even to the present day. They were so well liked in the UK that they had eight consecutive number one albums here. Although baring little in common with ABBA, present day Scandinavian musicians continue to infiltrate our shores. There have been no Eurovision winning super groups storming our Isles, but if you look closely, a guerilla group of songstresses are stealthily crossing the North Sea on a mission to rejuvenate our iPods and music venues with a set of distinctive new sounds.

A host of female artists hailing from Scandinavian shores, wielding catchy beats and intriguing vocals have become increasingly prominent in the UK, and they have not gone unnoticed. A couple of years ago I was transfixed by Swedish duo First Aid Kit at Bestival, whilst late last year I saw an article in a Topshop zine interviewing Say Lou Lou, a Swedish/Australian twin sister act. A few months later, I went to see a London Grammar gig in Newcastle and Say Lou Lou supported. Buzzfeed dedicated an article to the Scandinavian music scene in 2013, whilst Topshop has not only spotted the talent of Say Lou Lou, but conducted interviews and photo shoots with singer MØ. In fact just before I began writing this article, Annie Mac showcased a tune by Swedish born Alice Boman on her Radio 1 show.

This is a trend that should not be ignored; the women below are responsible for a diverse onslaught of electro/synthy/indie/folky/dreamy musical creativity that you should be taking notice of. Let them spruce up your music collection! (Here’s a handy spotify playlist).

1. Say Lou Lou. Though currently with only four singles, Say Lou Lou are in the final stages of releasing their debut album. Their silky smooth harmonies are paired with edgy electro instrumentation. Supporting London Grammar earlier this year at Northumbria University Students Union, the twins were preened to perfection, gently bobbing along to their laid back, but currently limited, repertoire. One might be daunted to support the hugely successful London Grammar, but they entirely held their own, maintaining the crowd’s full attention in the warm up to the main event.

Songs to try: “Everything we Touch” – Absolutely dreamy!

“Better in the Dark” – Strong beats give an understated clout.

2. Oh Land. Oh Land is a vivacious character who not only sings but acts (she was recently on the red carpet at Cannes Film festival, sporting electric blue hair, for her part in film The Salvation) and currently occupies one of those big twirly red chairs as a judge on Denmark’s “The Voice Junior”. Her songs are totally catchy – it’s guaranteed you can’t listen to ones like uber punchy Sun of a Gun without them floating through your mind for the rest of the day, but some seem the ideal soundtrack to a modern day fairytale.

Songs to try: “Cherry on Top” – Ideal for winding down.

“Sun of a Gun” – From her debut album but still très catchy.

3. Alice Boman. Bringing out her second EP this year, Alice Boman, from Sweden, pairs discordant sounding piano, The XX/James Blake style electro murmurs and ghostly vocals to create haunting but beautiful tracks. She almost whispers through many of her songs, interspersed with ethereal instrumentals. Even within one EP there are surprises – in her 2014 EP II, Boman moves from richly layered pieces like “Be Mine”, to exhibit an almost country sounding voice in the track “Lead Me”.

Songs to Try: “What” – Spooky and ethereal.

4. First Aid Kit. These sisters have the ethnic look down to an ultra hip t. And their sound is like a modern take on the country/folk music tradition. Heartfelt lyrics and harmonies with acoustic strumming and soothing woodwind ensure an emotive experience for any listener. As the pair releases new single “Cedar Lane”, a first taster of their fourth album, it seems that this theme will continue, though perhaps with more depth of sound and complexity than earlier songs. They are definitely helping to keep Sweden on the musical map.

“Our Own Pretty Ways” – For a taste of their early stuff.

5. MØ. The music that MØ creates is an exciting electro indie pop adventure in which rebellious sounding vocals are pouted out to an ever present beat, occasionally reminiscent of Lana Del Rey. From Denmark, MØ brought out her first full length album No Mythologies to Follow earlier this year. It was eagerly anticipated after previous releases with the likes of Avicii and Diplo, and did not disappoint.

6. Lykke Li. In a similar vein to MØ, Lykke Li uses both powerful lyrics and beats to grab people’s attention. Her voice is truly distinctive, helping her to grab the attention of the music world in the 2000s. Now on her third album, I Never Learn, released last month, her sound is powerful and earnest.

Songs to Try: “No Rest for the Wicked” – Belted out and heartfelt.

“Get Some” – A song with attitude.

7. Agnes Obel. Agnes creates beautifully melodic tunes. Her most recent album Aventine is bursting with truly lullaby-worthy material. Her music is almost verging on the orchestral; lingering piano and string instrumentals are combined with poignant vocals. Obel’s voice is truly polished throughout her album and her talent has not gone unnoticed by critics or the general public as more than 550,000 copies of her debut album were sold.