Live Review: Mastodon (plus Krokodil and Big Business) at the O2 Academy, Newcastle 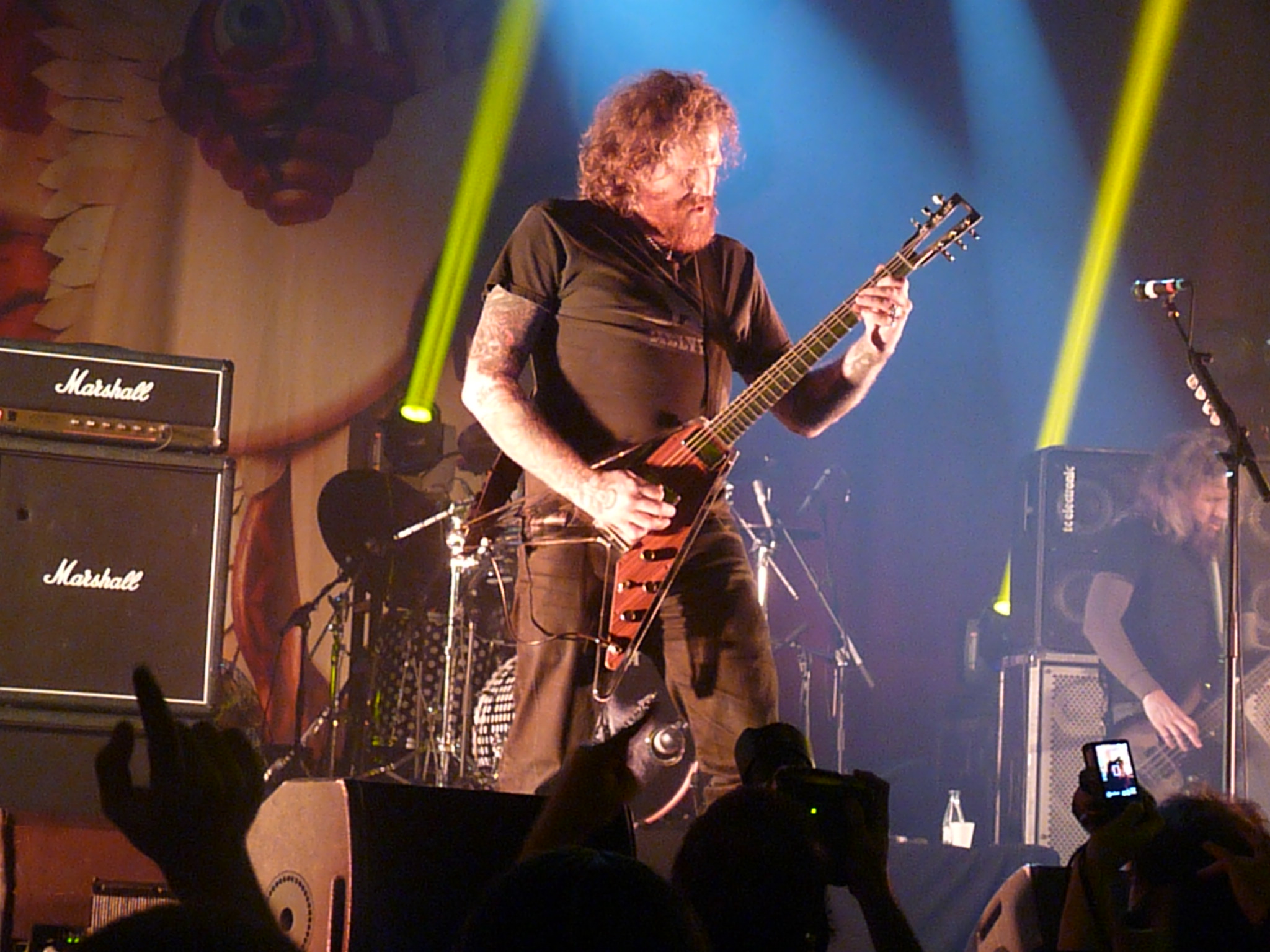 Heavy metal today is a lot like Liverpool Football Club. In the 70s and 80s it was a dominating force, reaching the heights of the charts and popularity. Bands like Black Sabbath, Iron Maiden and Metallica literally ruled the world of music, just as Liverpool ruled the world of football. Since the 1990s Liverpool, and sadly heavy metal, are pale in comparison to the almighty powers they once were. However, all is not lost – unlike Liverpool (sorry Liverpool fans I have nothing against you or the club, it’s just an inconveniently convenient analogy) – the beloved genre has one band flying the flag, one group currently sitting atop the Iron Throne, one Rainbow In The Dark (metal fans will get that reference!) That force is the omnipotent Mastodon.

Hailing from Atlanta, USA, Mastodon are a tricky band to pin down to one genre. They can best be described under the fantastically unhelpful label of progressive sludge metal. This means chunky riffs, unusual bass lines and commanding drum beats. And we get that and more tonight in a packed 02 Academy. But more about the kings of 21st century metal in a while – first we need to discuss the support acts. Supporting such a force as Mastodon can be no easy task; it’d be like doing the introduction to William Wallace’s speech at the battle of Stirling. Were the acts up to the task?

Krokodil (featuring former members of successful punk outfit Gallows and metalcore champions Sikth) don’t introduce themselves. They walk on stage, finishing their beers, strap on their instruments and within 10 seconds the audience is being assaulted by a wall of sheer noise. No introductions, just straight to business. And it’s fantastic. The three guitarists tear the 02 a new one with their pounding riffs that aren’t too dissimilar to that of Pantera legend Dimebag Darrell. But what makes these guys so impressive is the power of frontman Simon Wright. His passion and energy bring the show to life as he jumps, runs around a relatively tiny stage, squats and seriously screams. His lungs must be made of concrete because throughout the set they show no sign of relenting, despite the immense pressure he’s putting them through. The one criticism however is that on record (check out Shatter) Krokodil write some great melodies – these are somewhat drowned out by the thumping rhythm and hectic vocals. Nevertheless, it is still a very solid start to the evening, and Newcastle is buzzing.

Up next are bass guitar/drum duo Big Business. For only 2 guys they make a lot of noise. They also interact with the audience a lot more, with frontman Jared Warren (who’s also played in sludge band Melvins) picking on random audience members and telling them whether he likes or pities them. With the audience (we are a metal audience after all) getting progressively more and more drunk from the 2 pint glasses on offer at an extortionately priced bar the band is received very well, thanks particularly to a bombastically enthusiastic drumming performance, complete with a set of six cowbells. Being realistic, there is only so much you can do with 2 instruments, which was reflected in a rather unvaried set of songs, but Big Business still do a good job. But onto the main course…

The tension’s almost unbearable as the metal disciples wait for their leaders to emerge onto a stage with an unbelievable trippy backdrop. The circle pit it itching to get going and people can barely contain themselves. But after what seems like an age the heroes of our time run out all smiles to screams of adoration and excitement. We know this is going to be big, but few could have been prepared for just how awesome Mastodon turn out to be.

The set starts with the opener for recent release Once More ‘Round The Sun (number one on both the UK and US rock charts) Tread Lightly. The lights go out as the introductory acoustic riff is sampled. And then BAM! Bill Kelliher and Brent Hinds smash down a power chord that could wake Thor himself. Brann Dailor rolls his explosive drumming into action before frontman/bassist Troy Sanders kicks off. The lights are flashing, the riffs are roaring and the heads are well and truly banging. Straightaway you know this is going to be better than a good show.

Up next is the latest release’s title track, which starts with a fast and complicated riff, complete with flashing lights and pumping fists. The chorus is a highlight as well, with 2,000 metalheads joining in the trippy line of “Once more round the sun we go”, before bouncing back into a pulsating chorus and midsection. On that topic, whoever was in charge of lighting is a hero, because it was perfect. If we thought after that whirlwind introduction we would get a bit of respite though we were mistaken. No longer is it finished than the fantastically upbeat hard rocker Blasteroid (from 2011’s The Hunter) is on. This one gets the most positive reaction so far. It’s great; it sounds like Foo Fighters on steroids.

The band finally decide to slow to things down a bit for the next number with lead single Oblivion from 2007’s prog masterpiece Crack The Skye. On a personal level this one meant a lot to me as this is my favourite Mastodon album by quite a distance. It’s followed by the short but sweet Motherload.

There has been no pause for interaction yet, despite being 5 songs in. And still no respite, as Chimes At Midnight enters with its haunting, squealing lead over slow fat rhythm. This one is special. The intro lasts for about 20 seconds before the main riff comes hammering in – a flurry of hammer-ons and pull-offs all played to frantic effect. Throughout the entirety of its six and half minutes there isn’t one person who isn’t bouncing; it’s like they’ve managed to create a trampoline in place of a floor

Any need for nostalgia from older albums gets blown out the window with the neck-breaking High Road, the debut single from Once More. The riff is just indescribable. Slow, chunky and stomping it gets the venue slowly but furiously headbanging, along with some serious sky punching. Before your neck breaks from the pressure it’s time for the chorus, and it’s insanely easy to sing along to, with the whole crowd joining in.

The band then return to some older material before personal highlight Halloween from Once More. Just…wow. A typically complex Brent Hinds riff gets us going but it’s the extended outro that makes it so special. It’s pure heavy metal at is finest. Distortion and pace that seems like it’s never going to end. It’s mixed with frequent pauses, met with a cheer from the crowd, and it just repeats again and again, with every head banging. If they’d done it any longer they’d be facing lawsuits for broken necks. It’s tense, ridiculously energetic mind-blowing stuff.

We get another chance to join in next with Aunt Lisa, with another outro to die for, as Newcastle as one chants “Hey! Ho! Let’s fucking go! Hey! Ho! Let’s get up and rock and roll!” That’s certainly been achieved. Another blast from the past is next with Divinations, whose midsection again threatens to wake the gods. The picking is unreal; you’ve got tremolo picking and then you’ve got the strongest wrist known to mankind picking.

The next songs show no sign of relenting – it’s telling of what an energetic set it is when the only pause for audience interactions comes before the 15th song in a freaking 18 song set. The closer is as energetic as the opener. This gig was better than good, but like it all good things it has to come to an end. But what an end this was. Mastodon finish their set with the now iconic metal hit of Blood and Thunder. We know this is the last one, so the crowd decides to let out all remaining energy it has. The final twenty seconds consist of an almost unbearably good smashing of power chords before finally ending abrupbtly; to say the show ended with a bang is a criminal understatement.

Mastodon have met all high expectations and then exploded them out of the water. I know The Bubble doesn’t do ratings out of ten but I’ll give you a hint as to what mine would be (it would be in double figures). If you like any form of metal or rock for that matter you have to see Mastodon. It’s a viscous, unrelenting assault on the senses to see these guys perform – and it’s beautiful.