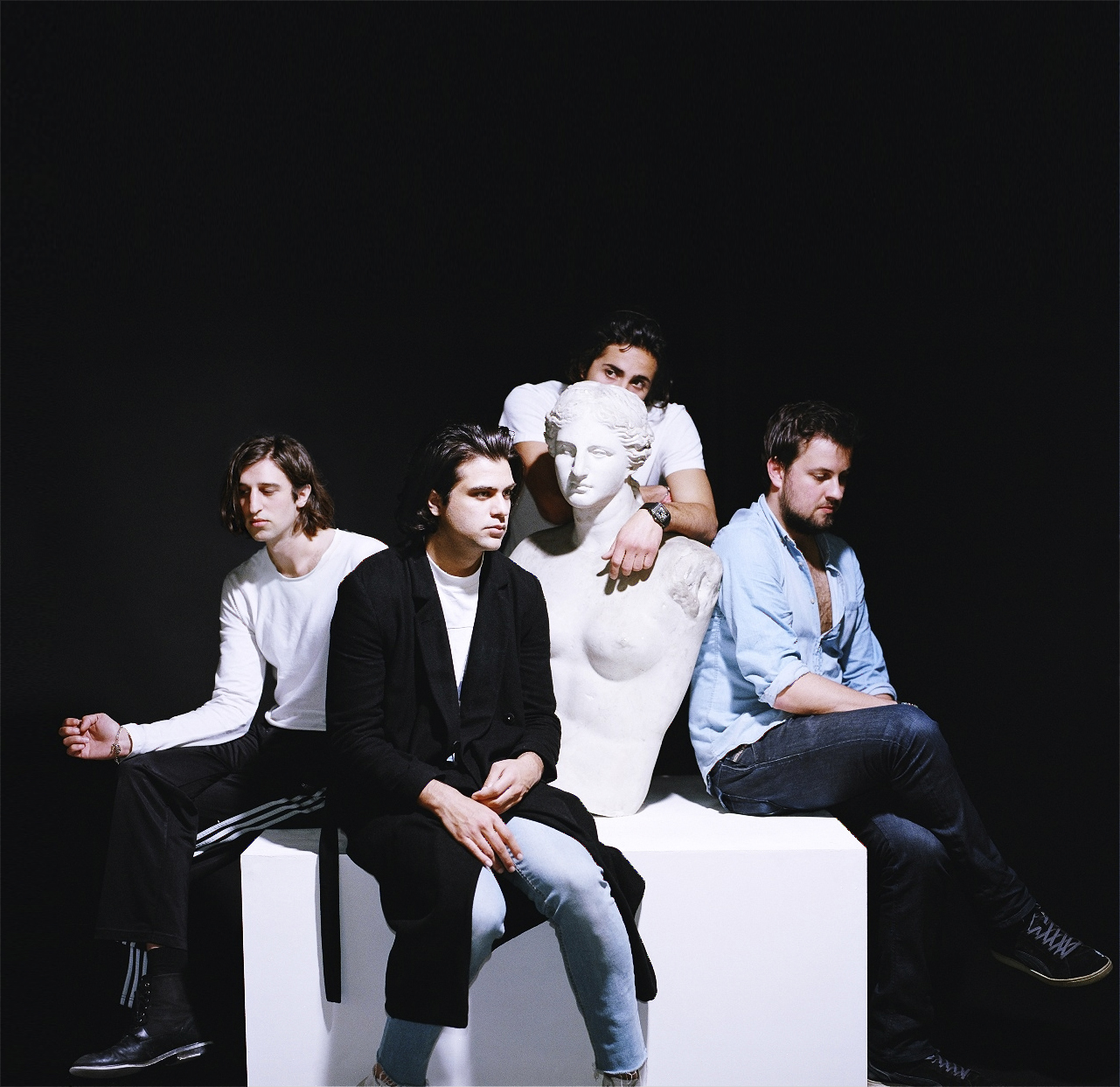 Yesterday, I was lucky enough to chat to Famy’s frontman Bruce Yates to discuss their debut album ‘We Fam Econo’. If you’ve not heard about Famy then it’s probably time to start listening. Described by the Guardian as ‘anthemic and self-assured’ these likely lads are making music that will first get you dancing then sit you down in anxious repose contemplating the direction of your life. From genre to song structure the album is loaded with nuances and contradictions; it feels like Famy have somehow managed to put to music the experience of reaching your 20’s and not really knowing what to do with your life. The album is packed full with such an eclectic range of influences that it’s difficult to pigeon hole Famy into any sort of genre. ‘We Fam Econo’ feels like a reluctant coming of age album- an almost unwelcome transition from boys messing around with guitars to a band making music for a living. Echoes of the Minute Men are substantial: singer Bruce confides that just like the Minute Men that preceded them the band doesn’t feel wholly comfortable in the London music scene. Retreating into a world of their own creation- a world where passionate folk music and 50’s Palma beach collide- has certainly been rewarded in the cacophony of sound that is the critically acclaimed ‘Ava’. The album is dripping with an offbeat exuberance for adventure, kooky nostalgia, and above all a reverence for God knows what; it’s like the album was designed as a swan song for a fleeting summer day, a record lamenting the end of recklessness and adventure. From just listening to the beautifully strange voice of Bruce Yates and the hypnotic ‘chung chung chung’ of brother Arthur’s guitar you know that these boys are really going somewhere even if they’re not too sure where that place is yet… To all appearances Famy really are the lost boys of Pop.

By this token then it was only natural that the interview took place while Bruce took a meandering walk to a physio appointment in central London, stopping off for a minute or two in a quiet alley to really get me acquainted with the story behind the album.

CG: So where did the name Famy come from?

Famy: We were originally called family when we first started out; we thought it was a really nice name- though there was a band in the 70’s called Family so we had to change it for legal reasons. So we became Famy from the French famille. We just changed it to a Y to be cool…

CG: From what I’ve read you graduated from punk to folk, does punk still influence what you’re doing?

Famy: Yeah, well none of us were really musicians. I kinda wrote the songs and the other guys played a bit and we just made a band out of it. So Arthur, my brother, started off playing the ukulele because it was the easiest thing to play. Now his electric guitar only has 4 strings and tuned to a ukulele. Nothing, no technical ability was going to get in the way of what we wanted to do. That’s where our Minute Men thing came from. We didn’t really fit in with London and that scene and the Minute Men didn’t fit in anywhere and felt like outsiders. That’s where the reference came from – we don’t sound like a punk band but we feel like we’ve been inspired by a punk band.

CG: 2012 was such a big year for you- you had sell out shows all throughout your tour and it’s evident that your popularity is still growing. Should we come to expect hits from Famy?

Famy: We listen to a lot of hits and though we want to be sustainable having a hit would be cool but it’s not really what we think about. We are influenced by pop. The songs that we write aren’t that experimental at all and they fit into a pop structure. We just do what we do and it comes out how it comes out.

CG: So how did recording go?

Famy: It was amazing, really really good. We went into a chapel with a guy, Miti Adhikari, who worked for the BBC. We went into the Maida Vale sessions and though we’d been working with a few producers we just didn’t really like any of them and we spoke to him about doing our album with us. He wanted to leave the BBC to go to India to cultivate the rock scene over there. We went into a chapel and did it. We were in a chapel for ten days in Gloucestershire. It was brilliant.

CG: Who are you listening to at the moment?

Famy: Now we’ve been given the chance to be a band I’m listening to song writers and doing my homework. I’m listening to Paul Simon, Leonard Cohen, guys like that. We all really like house music at the moment – so maybe we will write a hit because that’s what the hits of today are made of.

CG: Do any of these artists come out in the album? You can definitely hear a bit of The Beach Boys in there

Famy: I don’t know. It sounds really funny but we were a big influence on ourselves. We have a specific sound because of the whole thing of us not being able to play our instruments properly. I mean I can play guitar alright but I’m not going to be able to boss out a really great solo. Because my brother can only play down strokes on his guitar and our drummer wasn’t that adept there are a lot of ‘chung chung chung’ down stroke rhythms to all the songs so that’s the biggest thing for me in the record. If we can hear a song going a certain way we’ll make it more like that. Miti was like we need a U2 guitar part there so we put a U2 guitar part in it. We just kind of went with it and didn’t try to emulate anything from the outset and just kind of ended up going with flow.

The beach boys are amazing and they’re a band I return to again and again. Right in the beginning it was the Beach Boys and 50’s choral orchestral stuff. It worked its way into our sound quite early on and we haven’t really shaken it off. Not all of us can sing so we have maybe one harmony. Pet Sounds and other later Beach Boys stuff is what we really like and that’s in there as well.

CG: Well I really loved the album I think you have a great sound!

Haha, I really like it too. I think I’m our biggest fan. Hopefully other people will like it as well.

Well worth the purchase, ‘We Fam Econo’ comes out on the 8th September 2014.