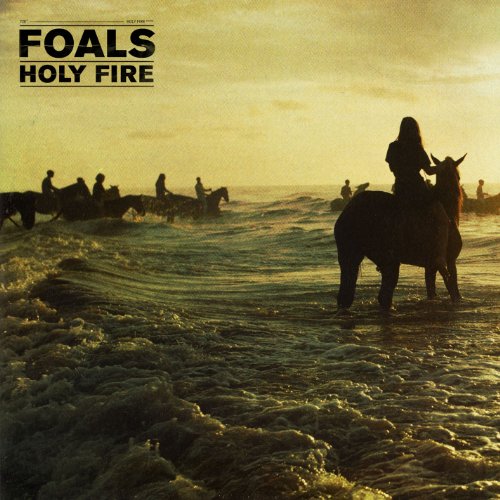 “A little horse that still needs milk”. The words with which Jose Mourinho, Chelsea FC’s enigmatic manager recently rebutted a question posed on his side’s championship hopes this season. Anaemic Foals were this band during second album Total Life Forever, threatened by the world; in a state of permanent dissatisfaction resulting in a solitude complex which permeated the album. They sought a refuge, brilliantly encapsulated in “Spanish Sahara”, still their single great achievement to date or to escape as outlined in the lyrics of Antidotes fan favourite “Olympic Airways”: “DIS-A-PPEAR”.

Tonight, the “little horse” has evaporated and in its place Foals mark II are born. Gone is the naïve math-rock to make young indie kids dance and in its place a machismo assault at the heavier end of the spectrum. For a band labelled Afrobeat in their early years this is not some Metal Afro fusion rather a slightly distorted combination of the two which to a large degree ignites in the live setting. The band enter as befits a genuine headliner, having cut their teeth with immense success at last summer’s Latitude, amidst a hypnotic spectacle of green lasers, which eventually emit the vest dressed guitarist, Jimmy Smiths, who casually plucks the opening to Holy Fire’s “Prelude”. This is a song of far too epic proportion for the smaller crowd tonight and is clearly designed with the arena stage in mind to rival the opening throbs of the Arctic Monkeys’ already iconic “Do I Wanna Know?”. Devoid of Pannis Philippakis’s grovelling howl “Prelude” lacks the sonic dislocation which distinguishes it and is a protracted and overwrought jam which slides into two breezier numbers, “Hummer” and “Olympic Airways”, to the manifest delight of the majority of the sub twenty audience.

This delight reaches an ecstatic crescendo as the captivatingly catchy mainstream pop of “My Number” reverberates around the bouncing bobs of the dance floor, before ushering in the tender beauty of Total Life Forever opener “Blue Blood”. Alongside the staggeringly transcendent “Spanish Sahara”, these tracks are the emotional zenith of the night and a personal highlight because they both display the diversity of Foals as a complex art rock vanity project (“Blue Blood”) and boil this formula down to its bare essence (“Spanish Sahara”). “Spanish Sahara” especially shines resplendently tonight with its tear jerking guitar lilt transforming into a beastly licking propulsive momentum. In short: genius. Disappointingly, the performance omits the brilliant “Black Gold” and “Afterglow” and instead of the free percussive dexterity of their earlier material, we are subjected to brainless and endless heavy freak outs on the underwhelming “Providence” as Yannis sneers “I’m an animal just like you”, a lazy shadow of the potential this band has to carve a niche with their unique intellectual diversity.

On the other hand, the laser show pulls the spectacle through; the red lasers on “Providence” and blue haze to accompany the sparse splendour of “Spanish Sahara” blend with the music to embellish it further. Though the scourge of the modern gig, the blanket phone coverage, obscures and undermines the whole attempt to concoct an immersive show. Yannis has his moment as he bombs into the crowd and materialises on the bar during the encore’s stomping “Two Steps, Twice” to give the arena filling material the intimate feel and frantic energy of an early bar gig. This material is at its best on the main set closing, jaw dropping magnificence of Afro Metal staple “Inhaler” which truly displays the apex of heavy Foals to make the “impossible, possible” and redefine their art/alt rock on a heavier platform.

The connection between Philippakis and this generation is palpable as the “young fans of Yannis” or “Fannies” echo: “Oh now Mama, do you hear me, calling out your name?”, the refrain of “Late Night”. The band can still deal in emotional gravity. It is now peeping out from the hollow mainstream pleasing Holy Fire’s faster, louder framework, devoid of the deep profundity of Total Life Forever. Though Radiohead producer Nigel Godrich has certainly influenced Foals’ soundscape, it is perhaps not wholly for the better. Foals have lost some of their nuance and have been “raised” to the acceptable, accessible echelons of the Beeb’s soundtrack to summer to sit prettily alongside BBC 2’S happy indie Alt-J idents. Still, on the whole tonight is tight; a decent set with which to assault the UK circuit, though perhaps not a total reflection of Foals’ championship hopes.