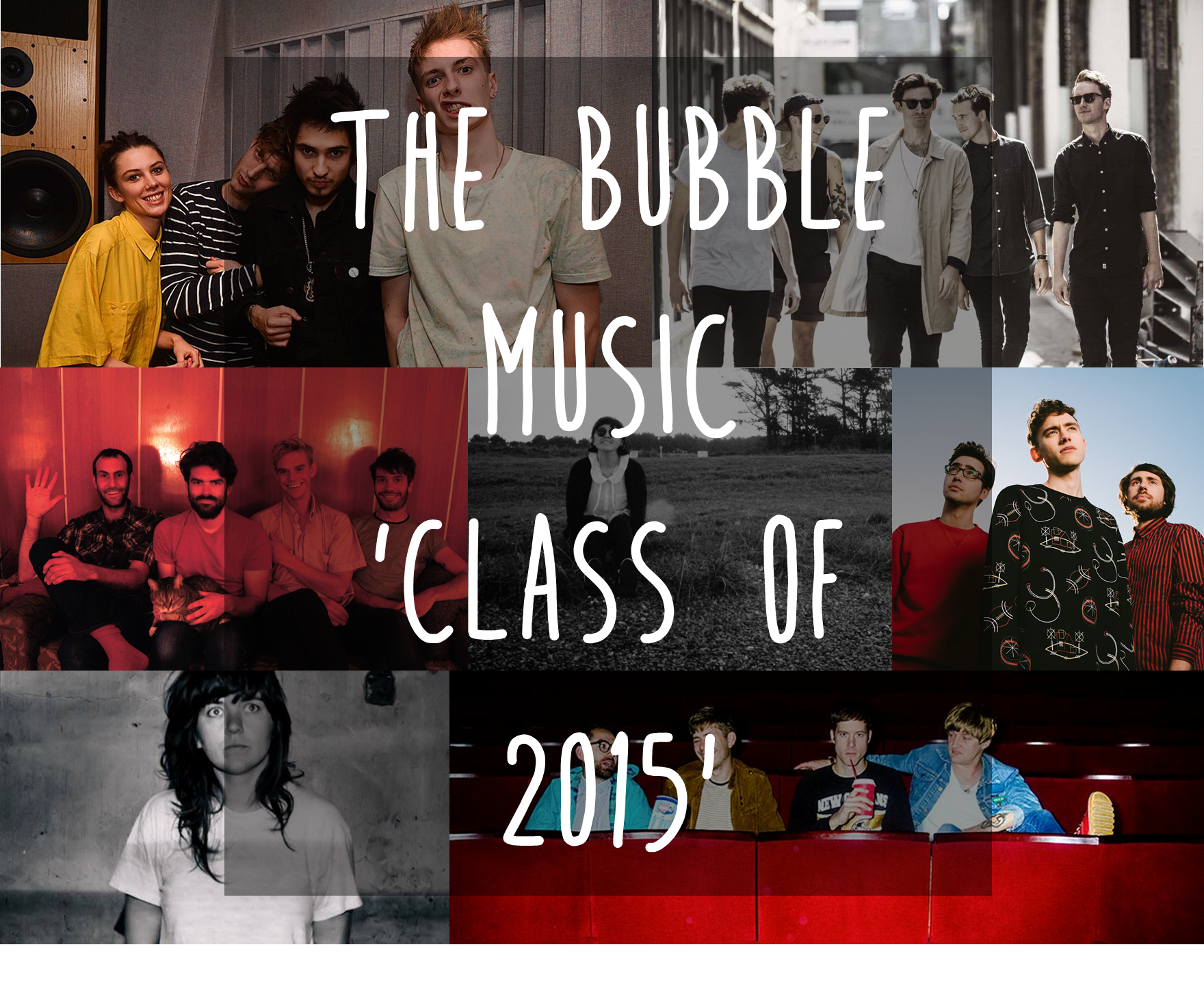 Now that the dust from the new year crashing into the old has settled, and we can clearly see the stretch of time known as 2015 ahead of us, now feels like a good time to try and predict which artists we feel will (or deserve to anyway) make an impression this year. If you disagree with our selection, or feel there are some legends in the making we have missed, let us know in the comments!

Ellie Rowsell et al. appear to have been around for ever, yet they’ve still yet to release their debut full length, a fact that will surely change this year. Taking things slowly, whilst maintaining a steady output of EPs and singles could pay off, having given them time to perfect their sound, and take the opportunities of playing at the biggest festivals in the UK and become well-oiled tour headliners. If they can muster up any more of the massive grunge-pop behemoths we’ve come accustomed to hearing from them (i.e. ‘Moaning Lisa Smile’, ‘She’), mixed in with the delicate and emotionally real alt.pop gems they intersperse them with, (‘Bros’, ‘Blush’) then this album could be the most exciting of the year. It hasn’t all been without a few misses though, tracks towards the end of both the ‘Creature Sounds’ and ‘Blush’ EPs drag a little, and they appear to still be a little rough around the edges. Nonetheless this is most definitely a group on the cusp, whether it’s of greatness or indie mediocrity is down to how well they can channel the angsty Cool Britannia vibes they possess into a coherent and quality album. Lewis Lloyd-Kinnings

For fans of acoustic Youtube channels WatchListenTell and Burberry Acoustic, the name ‘Life in Film’ might ring a bell. The east-London band got off to a promising start, with their pleasing combination of jangly indie guitars and a uniquely thick-sounding vocal earning them a slot on the BBC Introducing Stage at Glastonbury in 2009. Since then, however, they have largely disappeared from the limelight, save for a couple of low-key EPs and a single. Expect them to bounce back in 2015; they are currently putting the finishing touches on their as-yet-unnamed debut album, and if the CV of their producer Stephen Street is anything to go by, they must be ones to watch – Street is responsible for kickstarting the careers of such bands as Blur, Kaiser Chiefs, and the Courteeners, as well as working on the final three Smiths albums. Should be worth a punt, especially for those who want to find out what they’ve been up to these last six years. Jack Pooley

Crossing the finish line of 2014 with an in show live concert on Made In Chelsea, Bristol based group COASTS brought their brand of icy U2/Coldplay/Foals inflected pop-rock into more mainstream consciousness. Another band who have released two promising EPs and cut their teeth on the UK and European toilet circuit, they will be hoping that 2015 is the year that symphonic and anthemic arena rock is back in. Mixing imminently danceable beats with huge sing-along choruses, expect to see these guys all over the summer festival scene- hits like ‘A Rush of Blood’ and ‘Oceans’ surely to soon be supplemented by fresh material. It would be great to see these guys add a few more strings to their bow, as their current crop of tracks can seem somewhat formulaic, and with a potential debut album looming, more variety would be warmly welcome. That being said, if clinical and cool alt rock in the vein of Friendly Fires is your thing, this could be your new favourite band. LLK

Tipped by the UKs largest Radio station/’self-facilitating-media-node’ as act most likely to define the years sound? Check

Collaborations with the hippest up and coming producers? Check

If 2015 is an open goal for any artist it has to be Years & Years. It seems infeasible that they won’t be assaulting our ears with their infectious synthpop-R&B crossover throughout, and to no doubt successful effect. Everybody wants a piece of the Y&Y pie, and it seems there is plenty to go around. LLK

When I interviewed Ought *alright Ollie we’ve heard enough of that one, no one even knows who they are* they were talking to the manager/owner of the Brudenell about a band he’s putting on in February called Viet Cong. The members of Ought expressed their admiration for the band, and I made a mental note. A bit of googling at home and I found them to be from Calgary and consist partly of two of the members from the noughties band Women. Ought aren’t the only Canadian artist I’ve seen showing support for Viet Cong, in youtube-ing a live version of their track ‘Death’ (incredible by the way) I spot a certain Mr DeMarco nodding his head along on the front row. I’m now off to the Brudenell gig in February and after just listening to their debut self-titled LP I’m excited, very, and I expect others to be as well. The LP a bit of a mix-match of everything, at times they remind me of Joy Division (‘Silhouettes’), other times slightly Jesus and Mary Chain (‘Continental Self’), and consistently a bit Bowie (‘Pointless Existence’), but it’s brilliant throughout regardless. Now, just a ‘Best New Music’ from Pitchfork and they’ll be well on their way. That being said, even though they’re called Viet Cong I doubt they’ll ever be as big as Gorillaz *my dear god, that is the worst joke I’ve ever heard* Oliver Stephenson

It seems impossible these days to not be overwhelmed by the amount of under the radar nu-gaze bands that prop up from everywhere. Whacking on some overboard distortion, mumbling some inaudible lyrics and using drum loops recorded in a dustbin seems to be the song writing method de jour for unsigned bands. However, every so often, a real gem emerges. In 2014, this was LA/Kiwi artist Shunkan. Releasing her debut EP ‘Honey, Milk and Blood’ on the painfully cool Art Is Hard Records allowed us over in the UK and beyond to experience the amazingly touching and refreshing songs she has crafted. Pre-release single ‘Wash You Away’ is a genuine shiver-inducer, a great example of the pop-hooks-shafted-through-a-My-Bloody-Valentine filter that Shunkan delivers. Avoiding the typical flaw of opting for fuzzy style over substance, Shunkan is a shining light for accessible alternative songwriting that we hope to see more of in 2015. Having recently put the finishing touches on her first album ‘The Pink Noise’, it would be great if this was the year more people were exposed to this wonderful artist. LLK

I saw Courtney Bartnett last year in Newcastle after I read a rave review of her performance at the CMJ music marathon and saw that she was set to play the cluny. In fact it wasn’t even the cluny, it was the cluny 2, the tiny downstairs room. Anyways, it was probably the best ‘punt’ I’ve ever taken when it comes to a gig. Clever lyrics that were actually funny (no mean feat by any stretch of the imagination), awesome guitars which channelled Nirvana, and a real kooky Aussie style. She ended with a lower tempo song called ‘Depreston’, with hard-hitting but digestible lyrics, and a riff so gorgeous it’s been in my head ever since. Her double EP ‘Sea of Split Peas’ was released in 2013 and has slowly started to make *no pun intended* waves, and for good reason (just listen to ‘Avant Gardener’ if you want to be convinced). She’s got a debut LP out this year, featuring ‘Depreston’, and if she continues playing live the way she was when I saw her, she’s gonna be big. Or at least she deserves to be. OS