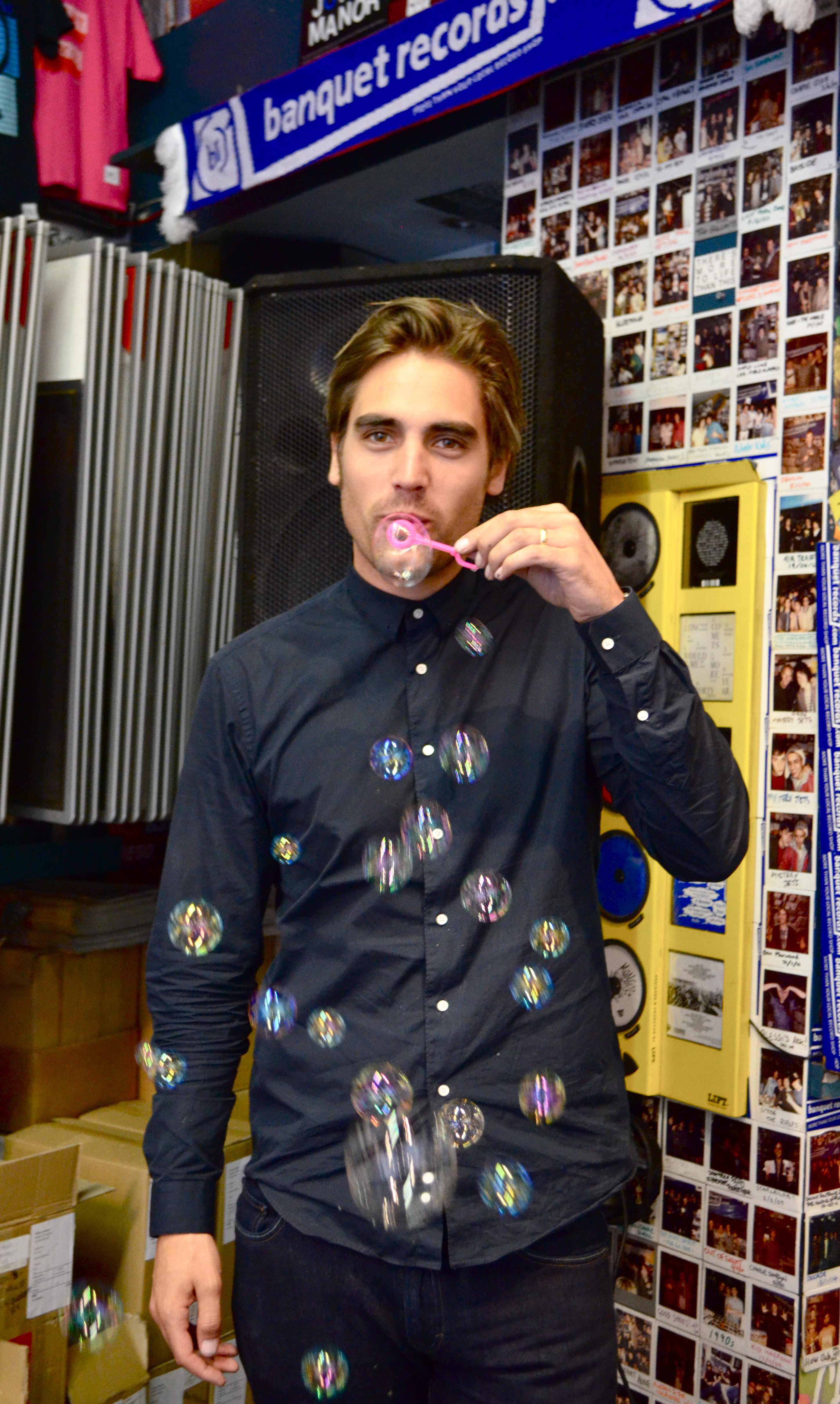 “I have a pretty awkward request to make of you”, I said to the now very quizzical Charlie Simpson as I slowly pulled out the spontaneously-bought bubbles from my bag. I am fully aware that this was probably the most random post-performance photo shoot that he is not even remotely likely to have again.

To many of you, Charlie Simpson may be better known as the bushy-browed Busted boy who quit the pop powerhouse in its heyday, in pursuit of his own artistic ventures. Thirteen years later, he’s back with his second album ‘Long Road Home’ which establishes him more credible as a solo artist than ever before. The epic hooks in songs, such as the title-track ‘Long Road Home’, seem the only lingering evidence of Simpson’s pop past, as he ditches choral clichés for rich, folky tones and careful harmonies. Charlie’s album may be a ‘Long Road Home’, but it’s surely a short road to success. 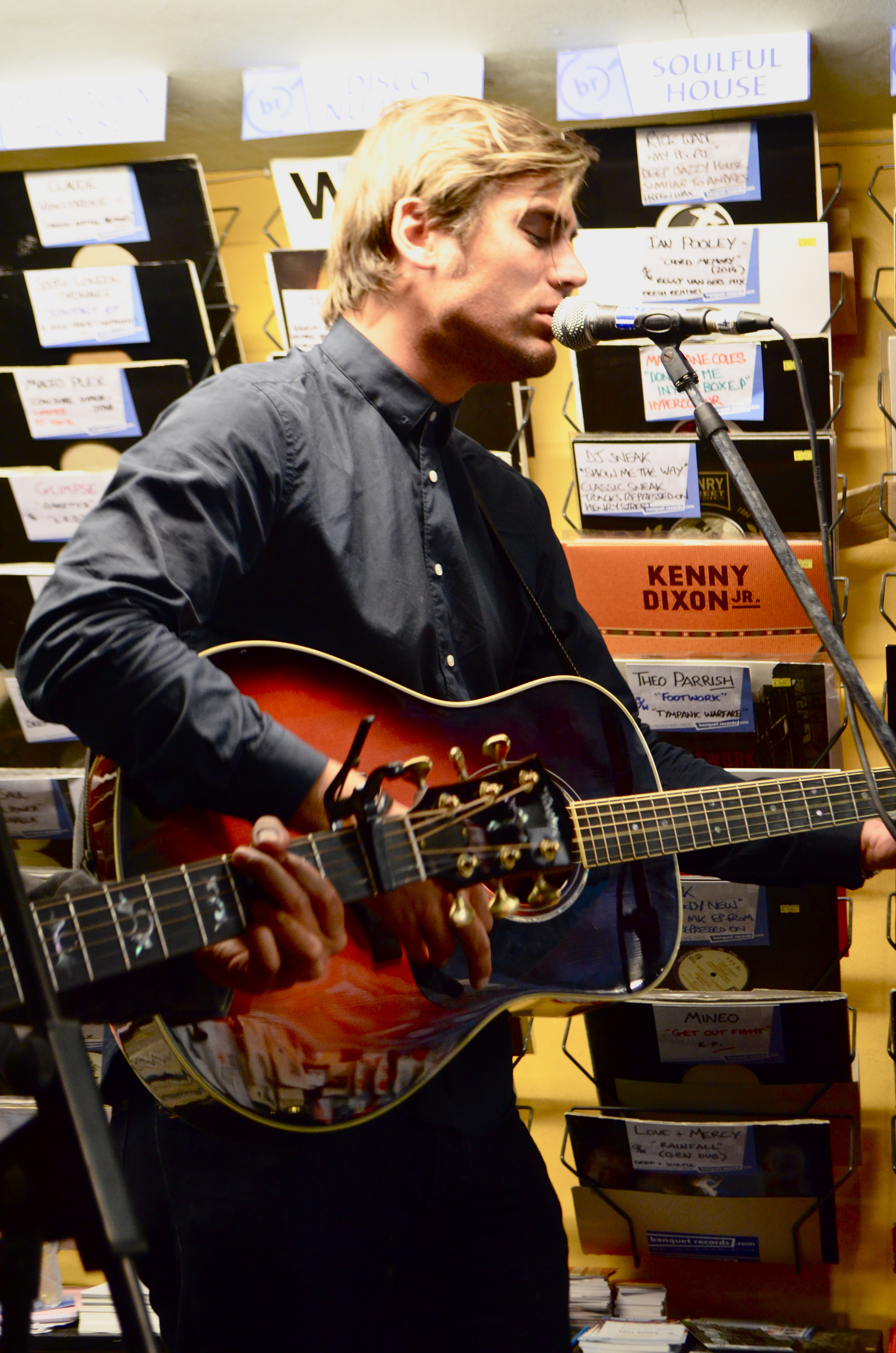 I got a chance to chat with him after his gig at Banquet Records on August 3rd:

Hi Charlie! So, a massive congratulations on the new album!

So I hear! And thank you, by the way, for writing a song about me…albeit with a different spelling! ‘Emily’ is definitely now one of my favourites on the record!

Oh is that so? Haha well, you’re welcome!

First things first. I’ve noticed this album has a very different tone to Young Pilgrim. Did you have any big inspiration for this or any particular influences?

I guess I just wanted it to sound a little warmer and more like a live record. I got my band playing on it this time and we recorded a lot of it live. I wanted to give it that sound of some of the old 70s records from around West coast America, which have a real warmth to them. So I did consciously want to have a record that sounded like a progression from my first album. I’m really happy with how it’s turned out. I also learnt a lot from Steve Osborne, the guy who produced it, too. This whole record was made in a way that I’d never made a record before. I mean, I grew up in the generation of computers and he’s very much like ‘Fuck computers!’

So he’s more of a traditional type when it comes to making tracks? That must be quite nice to work with someone with such a novel, yet old-school, approach?

Yeah it was, it was! It’s weird though, because, you know, musicians today don’t really need to commit to takes anymore as they can just do it again and again and again, until it’s right. But when you know your sound is actually being recorded, it’s a completely different frame of mind. It’s quite exciting!

And obviously you’ve got quite the musical repertoire. You’ve gone from boy band pop with Busted, to the heavier Fightstar stuff, and now this! Was there an epiphany moment when you decided that this was your creative calling?

To be honest, my Fightstar and more acoustic solo stuff are the two elements of my musical make-up with regard to taste. I knew I always wanted to make a solo record at some point and I thought it would probably be influenced by the 70s stuff my Dad used to make me listen to when I was younger – which it has been! I didn’t sit down and think “Oh I wonder what sound I should come up with?”, it was more of a natural development.

There are a lot of Bon Iver vibes in the album – it’s very chilled out stuff!

Haha yeah I can see that – I love all that stuff! I think for me my favourite part of music is harmonies. It’s all about the harmonies! That’s why I love the Beach Boys…the Eagles…man, I just love harmonies!

…and that’s definitely reflected in this album!

Haha yeah well, I hope so! It’s so nice to play around and actually have the creative freedom to go wherever I want to go with it. I love it.

That must be quite different from your Busted days, which we won’t dwell on too much, but obviously they are still very much a part of your career and arguably your fanbase. Where do you think you would’ve been without Busted today?

Obviously I’ve been very lucky to have had such an amazing start to my career, with a band that was very successful. I have no ideas what would have happened had that not!

It’s a hard line of work as a singer songwriter, isn’t it?

It is! Absolutely. And you know, people ask me if I regret doing Busted but I really don’t know why I’d ever regret it. It was brilliant fun and part of the whole learning experience. I honestly feel very lucky to have been a part of it.

Well, who knows, maybe Harry Styles might be in your position ten years down the line?

Who knows man, yeah! It’s a tough life in that sort of environment. It’s very commercial. It just didn’t really mix well with the person I was and who I wanted to be. And now, you know, I’m the happiest I ever have been and my history has led me to this point!

…and beyond! You’re playing the Roundhouse later this year, which is huge. Are there any other adventures planned that we can expect from Charlie Simpson?

Yes! I can’t wait for that. I definitely want to get back to playing as many live shows as possible. I also love doing festivals but didn’t get to do any this year because we wanted to concentrate on the album, so watch this space! It’s going to be a really exciting year I think.

And so it seems! ‘Long Road Home’ is available on iTunes now.