Album Review: Iceage, Plowing Into The Field Of Love 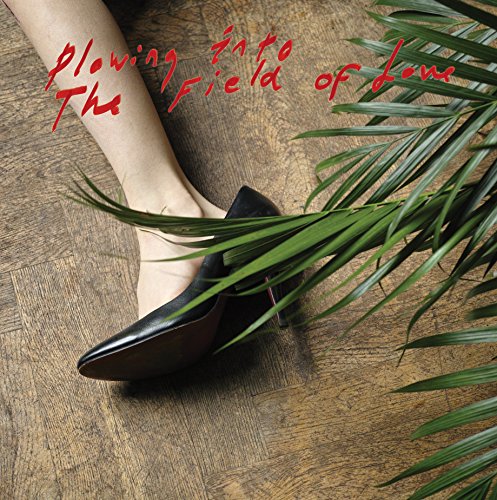 Iceage’s new album, Plowing Into The Field of Love

It sounds like he’s coughing up a fur ball…

A bit like Tom Waits in a way, only stinking of Scandinavian cool.

And like Tom Waits, or Nick Cave, or any other gravelly voiced singer, Elias Bender Rønnenfelt will face immediate disinterest from many listeners. People will play the first track of Copenhagen band’s new album, “Plowing Into the Field of Love”, and within ten seconds decide that the vocalist sounds like he’s just swallowed petrol, and subsequently toss the album onto the fire. Their Loss. Seriously, their loss.

“On my Fingers” is a beautifully moody opening track. The drums help build up an atmospheric aura, the piano sends it slightly gothic, slightly haunting, chugging guitars giving a reminder of the band’s punk-ier past. The bass is simple but essential, piecing in seamlessly with the percussion to hold together the dramatic feel of the song. Then we have the vocals. Broken and imperfect, yes, but also full of emotion. Like Morrissey, Rønnenfelt’s melodies wander, they feel natural and organic, unconstrained by standard song structures, and lines aren’t confined to being squeezed into small spaces: “I don’t care whose house is on fire/ As long as I can warm myself at the blaze/ Of burning furnish, cherished photographs/ Unrelated hell”

“The Lord’s Favorite”, not too dissimilar in feel to a really good Libertines song, is next up. And it’s incredible. Racing guitars, heavy drum strokes, and a dancing bass, all slightly country-like, meet full-of-attitude vocals. “After all I think it’s evident that I am god’s favourite one. And now is the time I should have whatever I desire”, Rønnenfelt’s character tells us.

The euphoric middle section of “How Many”, starting with the line, “Trapped in a body that doesn’t act on thought” is gorgeous and “Glassy Eyed, Dormant And Veiled” is worth listening to for the furious spits of drums alone. Not to mention the flamenco guitars and the terrifying monologue of a drunken irresponsible father: “Don’t think I did not hear you coming home, boy/ Don’t think I did not hear you coming home, last night”, “My head is pounding like the wagons on a freight train/ The wheels are poorly fastened and they threaten to drive off the tracks”. The dramatically changing rhythms on “Stay” are reminiscent of The Velvet Underground’s “Heroin”, only coupled with vocals by a man-possessed.

Military-like drums and western guitars start the next song, but in little over a minute and a half this has transformed into something that wouldn’t seem too tame on a Fucked Up LP. A Stone Roses drums and bass infused middle section later and we meet a second wave of madness, ending with Rønnenfelt screaming out the name of the song, “Let it Vanish”. It’s this sort of variety you start to come to expect from the album, which is why the very mid-noughties dance-y indie style of “Abundant Living” doesn’t really come as a surprise, nor will the random heavy metal guitar section in the middle. But it sequences so well, and all has such a distinct Iceage stamp on it, that it keeps you on your toes.”Forever” is both The Smiths and Stooges-at-their-heaviest in equal parts, matching the lyrics somewhat: “I always had the sense that I was split in two/ It seems so complicated/ To shift between existence/ To long for the better one”. It’s confused, a tussling between styles, and where the hell did those horns come from at the end? But the result of it all is another brilliant track, one of the strongest, from an already impressive album.

“Cimmerian Shade” is admittedly pretty dreary, and other than the pre-established style of the whole album, offers very little else other than some interesting grunting noises (pain or pleasure? you decide). It’s OK though, because Rønnenfelt turns on his crooner for “against the moon”, a slower number with a jazzy style that surprised even me. However, I can’t help but think that it’s a piece of respite, to calm you before a final onslaught.

Well if I am right about a final onslaught, it’s not starting with “Simony”. Not exactly easy listening, but maybe just passable for radio (if you have a particularly adventurous DJ). It’s a nice song, I love the plucked guitar style, and the heavy drum pounds, and the slightly distorted outro.

OK, final track, “Plowing Into The Field Of Love”…

So get past the slightly acquired taste vocals, the sporadic nature of the rhythms, and the whole host of influences all pushing and shoving for their moment, and you’ve got record that will constantly surprise and, for the majority of cases, delight. Go listen (but perhaps with headphones on and in your room, its not social music, not in the slightest).