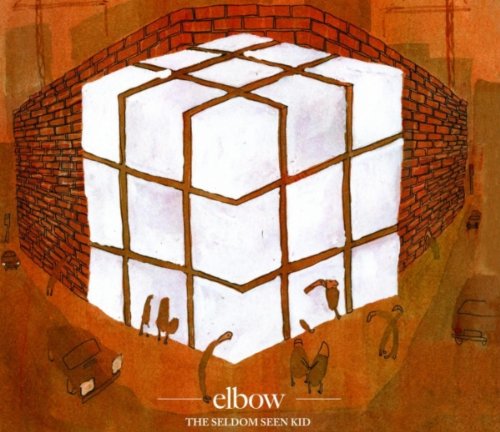 This is actually one of my favourite albums, and one of the very few in this 1001 Albums book that I had heard before purchasing it. I remember it being a favourite in my friendship group at school; Grounds for Divorce was on a playlist that we listened to at LAN parties. Happy days.

At the time, I don’t think I had realised how poetic popular music could be. I was perfectly happy to listen to it, and enjoyed doing so. But I hadn’t really got into it; I didn’t care about the music I was hearing. It was just background noise. If there was one album that changed that, it was The Seldom Seen Kid. I distinctly recall one occasion when I was listening to Grounds for Divorce and realised that I didn’t have a clue what the words meant, so I Googled them, and found numerous theories telling me that the third line of the song (“Polishing a compass that I hold in my sleep”) was a metaphor for masturbation.

Not really what I had expected, to be honest. But that was the first time I really thought about popular music critically, as a complex art form. So in many ways, Elbow are responsible for the very fact that I’m writing these articles.

The quintet from Bury first came together in 1990, when Guy Garvey (lead singer) asked Mark Potter to come and play the guitar in his band, with Richard Jupp (drums) and Pete Turner (bass). Mark’s brother Craig joined on keyboards shortly after. They played together for 7 years before adopting the name Elbow, inspired by a line in The Singing Detective, a BBC drama, where it is described as one of the loveliest word in the English language.

Their first record deal, with Island Records, came after victory in a local battle of the bands, but they were dropped from the label after it was bought out by Universal, and the album they had recorded with producer Steve Osborne was not released. Instead, they recorded early EPs – The Noisebox, The Newborn, and The Any Day Now – with independent label Ugly Man Records, before their debut album, Asleep in the Back, was released in May 2001.

There was a lot of praise from critics for the album – they earned a BRIT Award nomination for Best New British Band, it was shortlisted for the Mercury Music Prize, and Q listed it as one of the 50 best albums of the year – but it wasn’t quite as emphatic commercially. Indeed, it took until earlier this year for Elbow to gain their first chart-topping album, with The Take Off and Landing of Everything in March. The Seldom Seen Kid peaked at number 5, but has since sold one million copies.

It was nearly the end for Elbow – more problems with record labels meant that they were producing and financing the album themselves. But the song captured the public’s attention, helped along by plaudits from such unlikely sources as Lorraine Kelly and Gordon Brown, who were both public about their admiration of the album.

It is named for, and dedicated to, Bryan Glancy, a friend of the group who died in 2006. Death, alcoholism, and depression are themes throughout the album – it’s somewhat strange, then, that perhaps the most well-known track from it, One Day Like This, is the complete opposite. That particular euphoric anthem has been played and replayed on countless television shows – Waterloo Road, Big Brother, and Torchwood, among others – and has also been used at the closing ceremony of the 2012 Olympics, and in a presentation video for England’s bid to host the 2018 FIFA World Cup.

This just goes to show that “predictable” is the last thing you could describe this album as. You never know. Garvey’s versatility and range enables huge leaps in the melody that he tackles flawlessly, and you never see the next powerfully-constructed piece of imagery coming. The riffs on Grounds For Divorce are driving and energetic; the heartbreak of Starlings is tangible (“So yes, I guess I’m asking you to back a horse that’s good for glue and nothing else”). And Mirrorball is just stunning. There isn’t a single weak link in the chain.

You’ll be unsurprised to discover that you can hear most of the songs from this album – and some from the others I’ve listened to – on my Spotify playlist, available here.