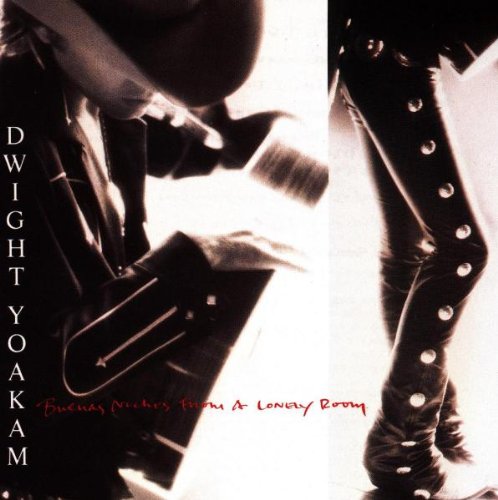 Due to my lack of millinery expertise, I’m not sure if “Stetson” is the correct term to refer to the hat that Dwight Yoakam wears. I just know that whatever it’s called, he’s got one. And it’s big. He’s also got pointy boots and trousers so tight that if you dropped a lump of coal in the top, a diamond would fall out the bottom. Basically, he just looks like a country singer.

Yoakam is also an actor, and has starred in several films; it turns out I’ve actually seen one of them: Panic Room, in which he plays a psychopathic murderer. I think I watched it at a party at a friend’s house – it’s not the sort of thing that’s usually to my taste – and the only thing I remember is one of the girls at said party deciding she needed to go to the toilet halfway through the film, but was too scared to go alone. So all the other girls accompanied her, and all the boys hid and ambushed them when they got back.

And in the title track of Buenas Noches From A Lonely Room (subtitled She Wore Red Dresses), Yoakam deals with heartbreak in a manner similar to his character in Panic Room (I assume, at least, as I remember very little about the film). He sings of the mother of his child leaving him for another man, and his revenge in the form of murder. But the delivery, tender, raw, and emotional, is in such stark contrast. It is sheer artistic brilliance.

This is considered to be the album that solidified Yoakam’s credentials as an artist, and rightly so. The beginning of his musical career was slow; he could not find a home for his sound in Nashville, Tennessee, where he had moved from Columbus, Ohio, in order to become a recording artist. He then moved to Los Angeles, where he started to gain success performing not to a standard country music audience, but in rock and punk rock clubs around the city. His music is often credited as the catalyst for rock fans accepting country music, as his universal authenticity helped him attract a more diverse audience than one might expect from the genre.

Mixing country roots with influences ranging from Elvis Presley to The Beatles, Yoakam created three albums in three years from 1986–8. All three hit the number 1 spot of Billboard’s Top Country Albums chart, and Buenas Noches, the third, peaked at 68 on the Billboard 200. Streets of Bakersfield and I Sang Dixie, the first two singles, were both number 1 on the Hot Country Songs list, and I Got You, released in 1989, was a number 5.

Although Buenas Noches was also his last number 1, it was the one that proved beyond all doubt that Yoakam was not a one- or two-hit wonder; he was still learning his craft, still improving, and whilst this was the peak of his commercial success, he would continue to produce unpretentious, genuine, and frankly excellent music.

On this album, Yoakam masters the art of sticking to a formula just enough to develop an instantly recognisable style whilst still constantly mixing it up so that every track sounds fresh. This is, in part, due to the sheer range of emotion he manages to convey in different tracks; the aforementioned Buenas Noches is so drastically different from I Got You, the upbeat opener of the record – and yet similar in so many ways.

Aside from his own writing, he also makes covers his own – notably Streets of Bakersfield, an old Buck Owens favourite – Yoakam indeed managed to persuade Owens, who was something of a hero of his, to come out of early retirement to duet with him on the album, sparking a new leg in Owens’ career.

Throughout, for me, the defining characteristic is simply how easy to listen to the music is. It is simple, immersive, and just plain good to listen to. Yet look closer, and you will be rewarded; it’s remarkable how many layers of subtlety are just beneath the surface. It’s a masterclass in writing and performance.

Listen to tracks from Buenas Noches From A Lonely Room, along with the other albums I’ve listened to so far, on the Spotify playlist here.