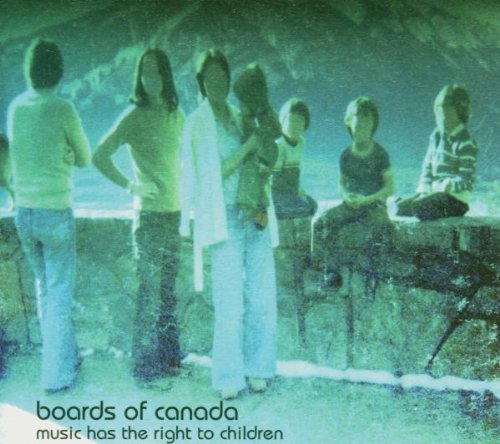 Board of Canada’s Music Has the Right to Children

My immediate reaction after listening to the first 30 seconds of this album was that it sounded like a mixture of Claude Debussy and the soundtrack from Portal 2. I’m not sure if that says more about the album or me.

But Music Has is an album that symbolises the reason I bought the 1001 Albums book, and why I wanted to start writing this series. I was barely aware that music like this existed – so different from anything else I’ve come across in the world of popular music. Starting this article, I have no idea how to approach this music – and I don’t expect to be sure by the end of it, either. And when, just now, an advertisement played on Spotify between tracks, it felt like being woken from a light sleep by being slapped across the face with a wet fish.

Boards of Canada is a sibling duo; older brother Michael Sandison was born in Edinburgh in 1970, and Marcus arrived in 1971. Neither brother, nor the band itself, has a particularly extravagant public image; they give few interviews, and new releases are sparsely publicised. They have never actively toured. In fact, they have recorded a number of tracks under an alias – Hell Interface – and their back catalogue on their self-run label, Music70 (from before they signed to Skam, and later Warp), is little-known and hard to find.

Music Has, released in 1998, is their debut album – sort of. In 1996, they released Boc Maxima on Music70, but it was semi-private; 50 copies were made, which were given to friends and family. However, it was in many ways a precursor to Music Has, and shares many tracks with it. It was recorded at their own studio, Hexagon Sun, named after an enigmatic musical collective of whom they are the most well-known members, and contains some of their most popular tracks, including Roygbiv. Critical acclaim for the album was widespread and universal. It went on to feature at #35 on Pitchfork’s “Top Albums of the 1990s” list, and also appeared on Mojo’s list of Modern Classics.

Four albums in the 16 years since 1998 doesn’t exactly qualify as prolific. But it is reputed that the large majority of their creative output has been held back from release. Production of their second album, Geogaddi, involved 400 song fragments and 64 complete tracks, of which only 23 made it on to the album itself (and one of those is a track of complete silence). This is clearly a band who take a great deal of pride in their music, and in getting it just right.

And this is definitely managed on the strange and wonderful Music Has. The sound might not be particularly original in itself – influences from Brian Eno, Aphex Twin, and The Orb are easily identifiable. The duo also claim to be inspired by Joni Mitchell, The Incredible String Band, and the psychedelia of The Beatles. But that isn’t to say that it isn’t well executed – the texture, in particular, is masterful. There is never too much or too little going on, and you never feel that it goes on for too long or not long enough. It’s all just there, all 62:58 of it. It doesn’t yell at you to get you to pay attention; it waits for you to come to it.

Looking into the album with any depth is instantly rewarding. The theme of childhood is prevalent throughout; the band takes their name from the National Film Board of Canada, a company focusing on documentaries and educational films. Tracks like Roygbiv (the initialism for colours of the rainbow) and Triangles and Rhombuses hint at learning; Rue the Whirl and The Color of the Fire capture a childish naïveté (with the latter even containing a sample from Sesame Street of a child learning to write the words “I love you”). But it isn’t all blissful recollection. There’s something faintly sinister about the way the samples only just slip through the texture sometimes, hinting at something that is perhaps best left forgotten.

So what of Debussy and Portal 2? Perhaps it’s not surprising that they were the first things that sprung to mind (although they certainly weren’t the last; trying to write whilst listening to the album is a frustrating experience, as it frequently distracts you into just staring into space, listening, and perhaps daydreaming). The sound does convey a sense of mystery about the world, even a child-like wonder – which impressionists like Debussy also captured, expressing nebulous emotion rather than specific detail. And as for Portal 2, it wasn’t the only soundtrack I thought of; electronic ambience is common in video games. The Metroid and BIT.TRIP series also sprang to mind at various points.

So I’m not really sure if I’ve managed to understand this album; but I can at least talk about it in terms of things I already know. But I doubt I am unique in thinking that there remains something unidentifiably other about it, something that nothing else I know of comes close to.