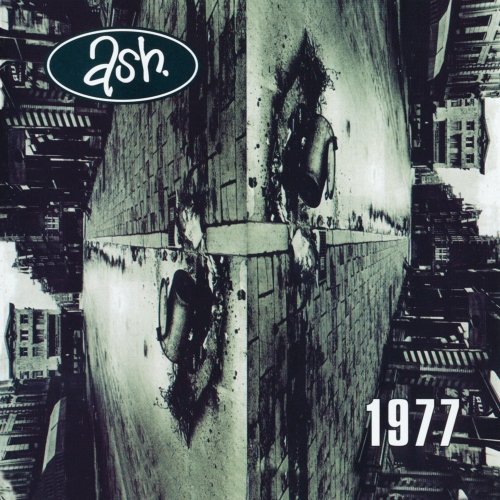 Aside from the title, 1977 is loaded with Star Wars references. The track Darkside Lightside is a nod to the two aspects of the Force. When Girl From Mars was released as a single, the b-side was a cover of the famous Cantina Band from Episode IV (which, incidentally, is my ringtone). And the album opens with the unmistakable sound of an Imperial TIE fighter (well, unmistakable if you’re a Star Wars fan), before exploding into youthful, enthusiastic, and frantic punk-rock.

What follows is a record with incredibly impressive credentials; it ranks at number 417 in NME’s list of the Greatest Albums of All Time, and is certified platinum by the BPI, having sold over 2 million copies worldwide. Not bad for a trio of 19-year-olds; vocalist and guitarist Tim Wheeler, bassist Mark Hamilton, and drummer Rick McMurray all grew up in Downpatrick, just south of Belfast in Northern Ireland, and attended Down High School. The band was first formed in 1992, four years before 1977’s release, and was reportedly named after the first word in the dictionary that they liked.

Wheeler, Hamilton, and McMurray continue to record and perform as Ash to the present day. From 1997 to 2006, the band also included Charlotte Hatherley as a second guitarist, having been limited by the reduced line-up while touring with American rock band Weezer. Hatherley and Ash “mutually agreed to part company,” according to the official statement from the band; in 2007, in an interview with The London Paper, the remaining members suggested that she was asked to leave so that they could return to their roots; they “wanted to be a three-piece.” Some of their material from that era has not since been played without a second guitarist; but neither Ash nor Hatherley have ruled out playing together again in the future.

Nevertheless, the band has an impressive catalogue of music that has made its way into popular culture. Continuing their love-affair with Star Wars, they teamed up with LucasArts to provide the end credits song for the 2005 video game Star Wars: Republic Commando, a tactical first-person shooter. Clones was the first licensed music ever to appear in Star Wars-related media, and appeared on Meltdown. From the same album, the title track and Orpheus made it onto the soundtracks of the film Shaun of the Dead, and video games NHL 2005, Burnout 3: Takedown, and Midnight Club 3: DUB Edition. Vampire Love appeared in American Pie Presents: Band Camp (perhaps a less impressive accomplishment). And from 1977, Lose Control featured in the original Gran Turismo racing game for PlayStation 1.

It’s generally accepted, however, that the band never quite matched the individualistic spin on mid-nineties Britpop that was their debut album. They released their last album, Twilight of the Innocents, in 2007, after which they decided only to release singles; according to Wheeler, “the way people listen to music has changed, with the advent of the download the emphasis has reverted to single tracks,” adding that “it hasn’t helped that most people have forgotten how to make a decent album.”

They have also performed 1977 in its entirety on a number of occasions, notably on the 5th and 6th September 2008 at the London Roundhouse and Astoria Theatre respectively, just before the release of the album’s collector’s edition in November of that year. In 2013, they toured the album for 3 dates in Australia. They do continue to record new music, though, and received good reviews for the collection of singles in their A-Z Series in 2009–10, along with consistent, if not spectacular chart success.

Inserting Star Wars fan references into an album is a pretty good way to get me to like it, and 1977 is no exception to this rule. Wheeler’s prodigious songwriting talent is evident on every song, with Hamilton chipping in for Lose Control and Innocent Smile, and McMurray on Angel Interceptor. Ash are often called a great singles band, and whilst this doesn’t quite acknowledge how well their LPs were constructed, it still rings true here; every single from the album went top 20, despite the variety in sound. Goldfinger and Oh Yeah display the group’s reflective side, with sublime chord changes that belie the group’s tender age. But the final track, Darkside Lightside, foreshadowed their later sound – urgent, and far grittier.

Overall, though, the musical maturity of the album captures the band’s lack of it. Whilst Wheeler’s singing would improve in Ash’s later work, it would never quite convey emotion in the same way as it did here; it’s an album perfectly made for 19-year-olds, by 19-year-olds.