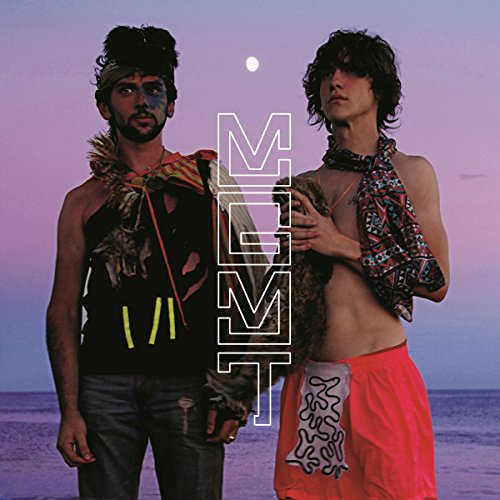 MGMT are quite possibly the only group featured in my entire book of 1001 Albums who have sued a former president of France. In January 2009, they initiated legal proceedings against the Union for a Popular Movement (UMP, when translated), headed by Nicolas Sarkozy, for using the song Kids as a soundtrack to their party conference and two online videos in 2008, stating that “the fact that the UMP used our song without permission while simultaneously pushing anti-piracy legislation seemed a little wack.” They turned down a symbolic offer of €1, and eventually settled out of court, donating the €32,500 they were awarded to an artists’ rights organisation.

Kids, the third single from MGMT’s debut album, Oracular Spectacular, has also been used in soundtracks for FIFA 09, the films Quicksilver, Stranger Than Fiction, and American Teen, and BBC programmes Survivors and Waterloo Road – legally, one assumes.

The album was almost universally praised, with Prefix Magazine calling it “a college-dorm experiment gone horribly right,” which given what the psychedelic rock duo has said about its formation, sounds about right. In an interview with their university newspaper, The Wesleyan Argus, in 2004, Ben Goldwasser remarked that he and Andrew VanWyngarden “weren’t trying to start a band, we were just hanging out and showing each other music that we liked.” They originally started out as The Management, and released demos under this name; but then found it was already taken, and so abbreviated to MGMT.

Within 18 months of leaving university, MGMT had been signed to Columbia Records by Maureen Kenny, despite thinking that the initial phone call from Columbia was a joke. The following year, 2007, they released Oracular Spectacular and went on tour opening for Of Montreal, with Matthew Asti (bass), James Richardson (drums), and Hank Sullivant (guitar) completing the touring line-up. Since then, they have at various stages supported a star-studded roster of artists, including Radiohead, M.I.A., Beck, Bruce Springsteen, and Paul McCartney, as well as going on various headline tours in the UK and America.

The ethereal synth-pop sound present throughout Oracular Spectacular is a trademark of Dave Fridmann, the album’s producer, known for his work with Mercury Rev and Flaming Lips, whose sound MGMT resemble closely. There’s an enormous amount of production going on here, but it doesn’t feel overdone; every layer of every track sounds as though it has been honed to Fridmann’s vision of perfection, made exactly the way he wanted it. The duo could not have hoped for a better producer for their debut; although when asked by their label for a list of their ideal producers, they requested Prince, Nigel Godrich, Barack Obama, and “not Sheryl Crow”.

The album has attracted impressive plaudits since its release; it was named the best album of 2008 by NME, and the 18th best album of the decade by Rolling Stone, who also have it at number 494 on their list of the 500 Greatest Albums of All Time. The aforementioned Kids and the album’s first track, Time To Pretend, have made it onto multiple lists of the best songs of the year, the decade, the 2000s, and so on. The album and its singles all charted impressively across the globe, peaking at number 8 in the UK. MGMT did earn a number 1 spot from Kids – in the singles charts in Norway, of all places.

Praise for the album was almost universal; Jason Lymangrover, writing for Allmusic, called it “some of the catchiest pop songs to come from NYC since the turn of the millennium,” saying that “the songs never feel insincere.” There’s certainly a youthful earnestness to the fantasising of Time To Pretend, expressing a wistfulness for a future that will never happen, and it carries through the rest of the album too.

It is not flawless, though; the second half of the album, as noted by Matt Fiander (Popmatters), is less impressive. It retains the overall sound of the opening few tracks, but is somehow less imaginative, and certainly less memorable – the duo appear to have used up all of their melodic resources by the end of Kids.

Nevertheless, this is a thoroughly enjoyable listen throughout, and a superb start to Goldwasser and VanWyngarden’s musical careers. Whilst their two subsequent albums have drifted more towards the psychedelic and experimental, and have performed less well than their debut, there is an overriding touch of perfectly controlled musical genius to their work; they know exactly how to direct their inspiration to create the sound they want.

The playlist accompanying this series now contains four tracks from this album; you can listen to them all here.