When we talk about drama, we tend to think exclusively of directing and acting, and yet creating a play is so much more than that : conception, scenography, staging, dramaturgy… And of course, a crucial part of it is the lighting design. Indeed, a performance is first and foremost a sensory experience more than an exercise of reason— you feel before you understand. That is exactly why lighting design and music are not to be left out, they are the primary source of emotions. They help tell a story, but they mostly convey an atmosphere, something ineffable but collectively felt.

Therefore, I think it’s time to give credit where credit is due, and finally talk about the incredible work that has been done on some plays over the last few years. It is however worth noting that because the main focus of this article is lighting design—and it transcends language barriers— none of the plays listed is from the UK, although two out of the three are performed in English. 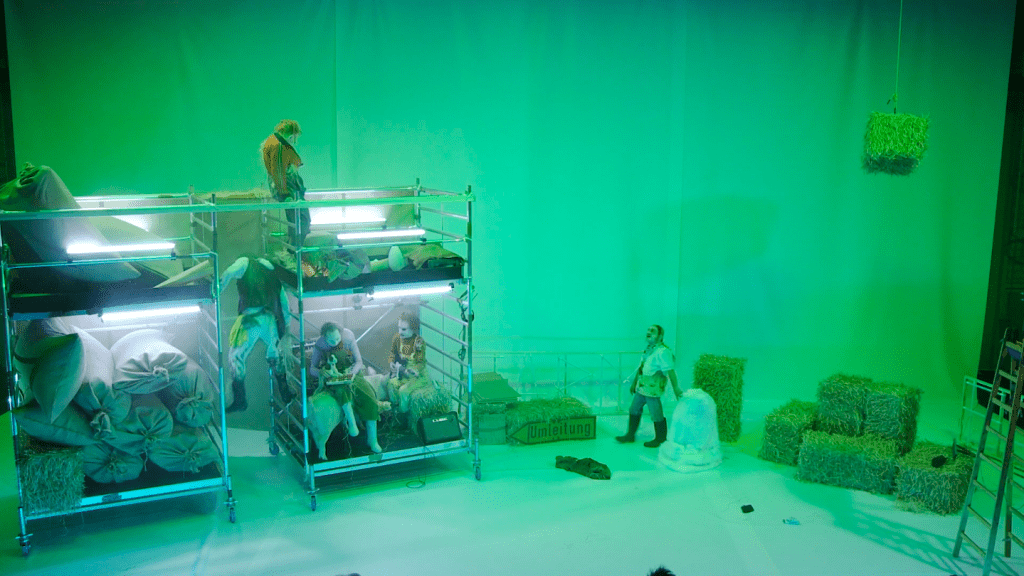 Philippe Quesne’s Farm Fatale, created in 2019, was a collaboration between Munich Kammerspiele and Nanterre-Amandiers (just outside of Paris). Philippe Quesne tries an experimental scenography revolving around ‘fake realism’— the stage is supposed to be a farm, but there is a failure of mimesis as every element presents itself as a lifeless object. The only things that are alive are the scarecrows, orphans on the Earth that has been destroyed by men. In this post-apocalyptic world where the industry has given a radioactive glow to the once healthy and natural farm, the characters have a mission of protecting what’s left and giving new life to the setting. They represent hope, even though they are lost wanderers. There is a very mesmerising scene with eggs, where they are doing a mysterious ritual, as if protecting them symbolized the possibility of a future. 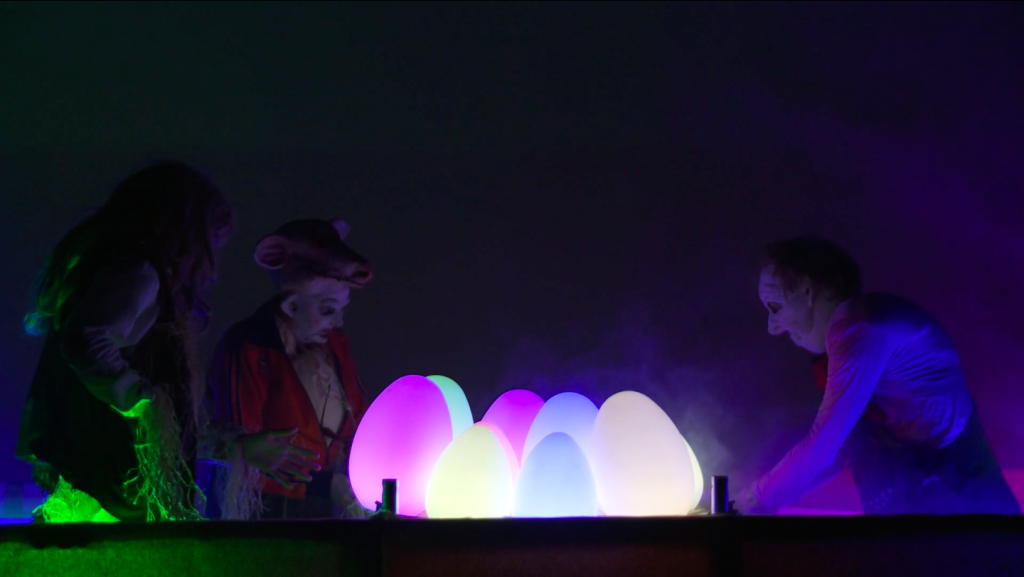 The esoteric, almost occult realm created by Philippe Quesne is almost solely achieved by lighting and colour : the fluorescent green, blue and red convey the idea of an in-between reality, after life but before life, after destruction but in the process of creation, a sort of purgatory where anything—any colour— is possible. Through lighting, Philippe Quesne offers a self-reflective play which, beyond raising awareness regarding the threats against the environment, tells the audience how drama as an art can reinvent itself. Despite the absence of a clear storyline, the lighting subtly indicates a timeframe. At first, the stage is bathed in a white light, but as the ‘plot’ progresses, light slowly disappears, and darkness takes over. This allows the vivid colours to arise and captivate the audience. 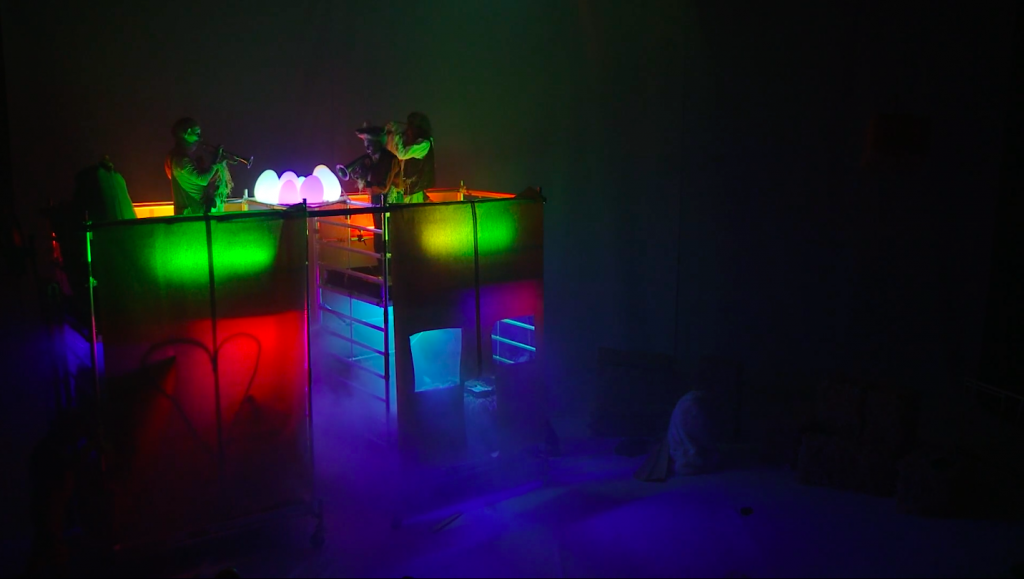 By the end, Farm Fatale is like Pandora’s box : the characters end up surrounded by the evils of the world, and only Elpis—hope— that is to say the eggs, remain. 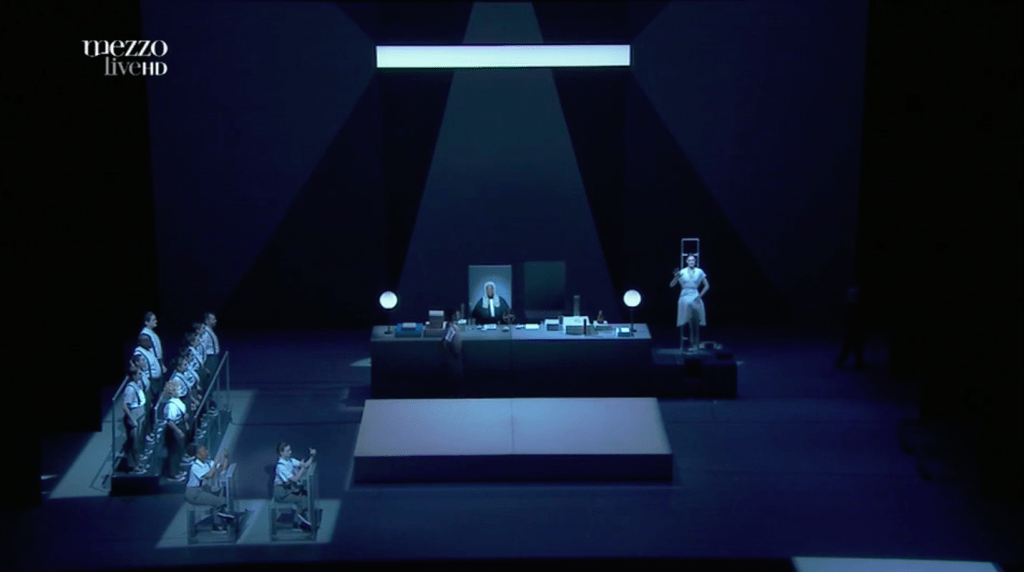 Directors who were trained as plastic artists (that is the case for all the directors whose plays are listed here) make the most aesthetically complex plays. In Robert Wilson’s Einstein on the beach, the aesthetics seem to be at the very chore of the play and although the title could hint at a linear biography of the physicist, it’s actually more of a collage of different scenes, motifs, images. Einstein on the beach has a plan : to substitute an artistic order to the outdated order of reality. It presents itself as a sort of series of living paintings which are not following a dramatic plot, but exist on their own. Robert Wilson creates a clever parallel between Einstein’s contribution to science, and his own to theatre. 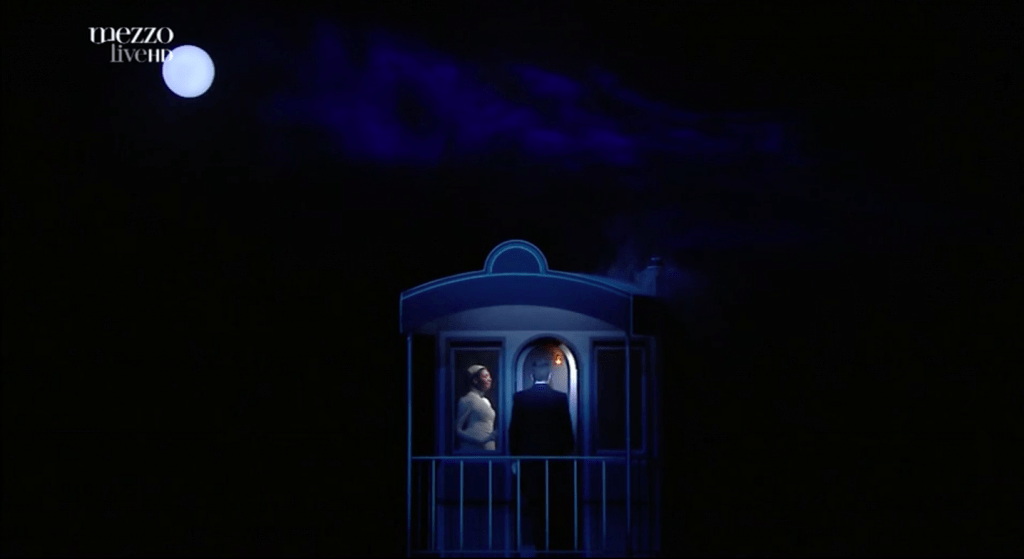 Although the play is fragmented and quite chaotic dramatically, a few elements insure a progression and they are, of course, visual elements. The lighting design especially allows a continuity throughout the succession of various images— the play being over four hours long, continuity is necessary. Indeed, a blue lighting illuminates the stage and takes a different meaning depending on the scene. The strong blue lines of the nightmarish trial scene convey the coldness of an implacable judge, while the blue mystical light of night during the balcony scene has a more romantic feel : it instantly becomes an oneiric musical interlude.

The lighting and use of light are so crucial in the play that what puts an end to the performance is the significant change of light : the very fast flashing of orange lights, in the shape of circles and crosses, marks a crescendo indicating that we are approaching the end. The last appearance of the train conductor poetically finishes the ‘story’ by recalling the first appearance of a train, and defines the play as a circular and infinite motion.

If you’ve read a bit of Dostoevsky, Tolstoy or Pushkin, you know that there is in Russian literature something really special, inexplicable, impossible to truly visually depict, what authors have called the ‘Russian soul’. Bulgakov is no exception to this rule and On the Run : a Play in Eight Dreams & Four Acts, relating the flight of the Whites at the end of the Russian Civil War, has this same unique Russian element. And yet, the French director Macha Makeïeff perfectly captured it, partly thanks to lighting design. La Fuite! is an accurate historical depiction of a tragic story that falls into a form of fantasy through a constant chiaroscuro, an alternation of light and darkness, which results in a very strange atmosphere, halfway between madness and illusion, memory and dream.

The scenery is either very colourful but plunged into the dark—or very poorly lit— or in neutral tones but bathed in a sort of magical light (purple of green).

What puts the emphasis on the idea of dream is the general darkness, which suggests that it’s always night and the characters are simultaneously protagonists of a daydream, memories, and the ones dreaming. Their flight was actually very similar to the director’s grandparents’— which explains the presence of a little girl playing Macha Makeïeff, watching the story without being part of it— and if the memories surrounding these historical events are obviously very foggy, the blurriness merges with the general bizarreness of a dream.

The discussion scene between the general and a subordinate in a room we observe through the glass walls— the only light comes from a ceiling light— gives the impression of a snow globe, a frozen scene, just like a memory, but also just like a dream.

(unfortunately, it’s in French without subtitles but if you know a little French, it’s worth it)