The Immortal Life Lessons of Winnie the Pooh 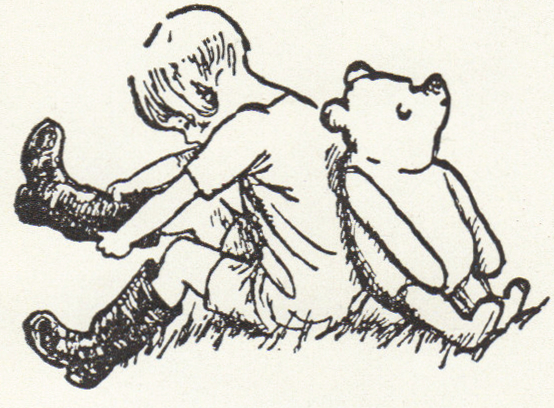 “Some people care too much, I think it’s called love”

Winnie the Pooh has been, at some time or another, every child’s closest friend. There is a Pooh-shaped bear in every nursery, every colouring book has pages filled with that red lipped smile and many pink felt tips have given their lives to scribbled Piglets. Everyone knows the name and everyone can remember being told the stories before bed or dreaming about wandering around the Hundred Acre Wood looking for woozles.

“Piglet sidled up to Pooh from behind. “Pooh?” he whispered.

“Nothing,” said Piglet, taking Pooh’s hand. “I just wanted to be sure of you.”

There is something about Pooh’s simplicity, the easy contentedness found in the most unlikely of places that makes this such a timeless classic for children regardless of gender, race, culture or circumstance. However, instead of staying obediently on the children’s bookshelf, Winnie the Pooh has jumped off the dusty shelves and into our grown up, hardened hearts, refusing to let us forget how to wonder. It has become not just a story we read to our children to help them fall asleep, but an allegory for life and all its ups and downs, even when we try to convince ourselves that we are far too old for such childish imaginings. A. A. Milne offers solutions to fears and anxiety as if they were merely trifling afflictions like coughs and sneezes. There is nothing in Pooh’s world that is too big to conquer, too daunting to face or too small to be discovered.

Milne describes friendship through the mouth of a self professed air head. Unlike most protagonists we read about, for whom supreme intelligence and common sense are a given, Pooh is a slow thinker who values the journey to the answer over the resolution to the problem. Milne speaks volumes about what really matters in life through characterising Pooh as someone society would overlook as a simple fool. And yet despite the fluff in his ears, Pooh plucks more sense from life than any maths lesson could ever teach us. As if to reinforce this point, those who spend their time thinking about things too much or being too clever seem unhappy – Eeyore is forever seeing the worst in the situation and torturing himself with pessimism whilst Rabbit is blinded by hard logic. Pooh’s logic exists not according to reason but hope. Maybe everything could go wrong, maybe the world is flawed and Eeyore is right to be worried, but then again, maybe not. The pure faith that Pooh has in the maybe is undoubtedly the most powerful of any literary hero, and forces the reader to consider the optimistic point of view, even in the midst of disaster.

“Supposing a tree fell down, Pooh, when we were underneath it?” “Supposing it didn’t”, said Pooh. After careful thought Piglet was comforted by this.

Pooh’s world is one in which love applies to everyone and everything, and is never held back by fear or embarrassment, but is shared unreservedly. No one is insignificant and everyone deserves to be noticed, loved and comforted. Compare that to the ignored homeless that line every street in Britain and it is clear that we still have a lot to learn from Pooh’s unrelenting kindness. Instead of the rush that seems to control our lives, Pooh takes pleasure in the suspended time of pondering, of being in perfect silence with friends who understand without words what love is and how to hold it.

“Sometimes if you stand on the bottom rail of a bridge and lean over to watch the river slipping slowly away beneath you, you will suddenly know everything there is to be known.”

Pooh continues to exist in his everlasting world where nothing is a waste of time and every tiny mystery is worth exploring, even the answer is obvious to everyone else. Dreams are real, ideas are never too far-fetched to be considered, and there is never a wrong answer, but instead many different ways of being right. It is as if Pooh lives in a world of Sunday afternoons when the rest of us are stuck in the perpetual Monday morning.

“I’m not lost for I know where I am. But however, where I am may be lost.”

Milne even manages to make death and separation seem bearable, and teaches his readers to focus not on the parting but on the laughter and memories that remain with us after those we love depart. Instead of ignoring the inevitable separation, Pooh prepares us for the hard times ahead by making us realise how close friends and loved ones stay with us even after they are gone. Belief in one’s self is reinforced throughout, and optimism prevails even in the darkest of situations.

“If ever there is tomorrow when we’re not together, there is something you must always remember. You are braver than you believe, stronger than you seem, and smarter than you think. But the most important thing is, even if we’re apart, I’ll always be with you.”

So, the next time someone tells you that Winnie the Pooh is just a nice children’s story, consider the way it applies to every aspect of life. Consider the faultless love and loyalty within those pages and the beauty of the everyday adventure. Remember how it taught you to respect those who were different to you, how it taught you not to spell love but to feel it and how being clever wasn’t all you needed to be. Remember that there are no such things as fear or loneliness, but that friends will always be close if you know where to look, and how sometimes the smallest things take up the most room in your heart.

“How lucky I am to have something that makes saying goodbye so hard.”