The Fight for Equality in Alice Walker’s ‘The Colour Purple’

Olivia Freeman-Barrett in Literature on 8 November, 2018. 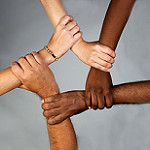 Last month, saw the celebration of ‘Black History month’; an important time to reflect on the progress society has achieved towards equality, and to remember the times, where black people endured hardships. A piece of poignant literature which stands out to me is the incredible writing of Alice Walker, in her novel ‘The Colour Purple’. Through the form of a diary, where the protagonist, Celie, writes letters to God, Walker intimately explores the feelings and events of this young black girl’s life, during a time of extreme racism and civil war in deep South America.

What stands out to me more than anything is the way in which the protagonist, Celie, not only suffers from having coloured skin, but she is further battered down by society due to being a young girl. From the first page, where she talks of the horrific way in which her father rapes her, the reader is shocked into the realisation that the difficulties for some of those who suffered, are beyond our imagination in the society we live in today. African-American girls, such as Celie, who lived in South Georgia during this time, were racially and sexually discriminated against to a level difficult to comprehend. However, it is not just the haunting facts which I believe makes ‘The Colour Purple’ worthy of reading for Black History Month. The fighting spirit of Celie,obtained through her suffering, leads the novel to be an incredible piece of literary work.

Through the character Shug Avery, Walker further embodies the determined spirit of the Civil Rights Movement. Celie believes her dark skin makes her ugly, but Shug is a symbol of confidence, gender empowerment and the importance of being strong and proud in one’s ethnicity.  In the novel, the women are simply destined to motherhood, with the black men taking on farming, with little else to aspire to. In contrast to the other characters, Shug is a singer, working towards her dream, encompassing the hope that one day, all of humanity will be given equal opportunities.

Furthermore, Shug is used in order to uncover the exploration of Celie’s sexuality. Celie has strong romantic feelings for Shug, and they explore sexuality together. Celie’s homosexual actions object her to further discrimination, but Walker seeks to create Celie in to an individual that she wants to be, with equal choice, despite the time period in which she lives. This belief solidifies the aim of Black History month. It seeks to celebrate the equality of individuals. It’s aim is to recognise that race is insignificant and the text celebrates this in a fascinating way. It would almost be reasonable to argue that racism is not the key focus of the novel. The key focus of the novel is the individual. Not a significant amount of the text seeks to directly inform or examine the racism of the period, which I believe is a very clever method used by Walker to dispute racism. She simply does not give racism too much attention in the book, perhaps viewing it simply as undeserving of focus. She places greater emphasis on the importance of the characters; it is the individuals that matter within the Civil Rights movement.

‘Everything want to be loved. Us sing and dance and holler, just trying to be loved’

This quotation from the novel highlights the essence of Walker’s message. The individuals seek happiness, and they seek to be treated with the love that any other individual would be. Despite their problems, they sing, dance, keep up their morale and battle for the happiness, that they deserve to have.

I would not recommend this book to someone looking for a lighthearted read. This book will haunt, shock and upset; however it is one that you will never forget. A common emotion amongst many who have finished the book is anger. Anger that these characters, who you become so fond of, have experienced what they have. However, the novel concludes with a sense of hope, because we leave Celie with a happier situation than when the story began. This progress towards equality is the heart of what Black History Month celebrates. ‘The Colour Purple’ is an experience that will shape your knowledge of Black History,and guide you on your way to fighting for minorities.