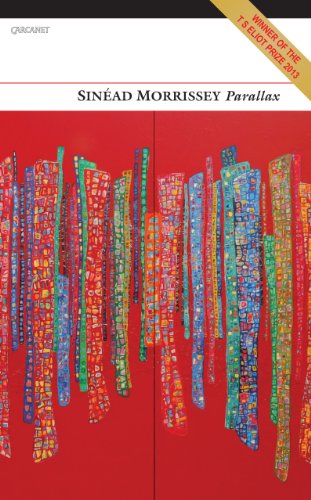 This year’s Durham Book Festival has provided a forum for a stunning range of authors and speakers, from Philip Pullman, author of the magisterial His Dark Materials trilogy, to Bill Bryson, perhaps more familiar to students as the namesake of the University Library than as a travel writer and general wit. Following this rich and vibrant array of events, the festival was closed intimately on the 17th of October by Belfast-born Festival Laureate Sinéad Morrissey. Prior to this event, she had already appeared at the Festival, visiting several local secondary schools to read and discuss her work.

On that final evening, a small but appreciative audience was enthralled by her thoughtful, nuanced reading of ten poems, including the specially commissioned ‘Colliery’. With many pieces from her previous collections, including Through the Square Window (2009) and the T.S. Eliot Prize-winning Parallax (2013), these seemingly disparate poems formed a moving and elegant unity, ever returning to themes of communication, perspective and the continuities between past and present. Indeed, the term “parallax”, so critical to Morrissey’s poetic philosophy, describes the apparent difference in the position of an object seen from different points, and therefore points towards this central concern with perspective.

After a brief and illuminating introduction by Professor Stephen Regan, Morrissey opened with her poem ‘Milihelen’, a “milihelen” being the amount of beauty required to launch a single ship. This description of the Titanic’s construction and launch instantly immersed the audience in her poetic art: sinuous, winding lists found dignity in the minutiae of ship-building, while moments of enchanting sibilance highlighted poetry’s power as an essentially oral medium. This textural richness was enhanced by Morrissey’s sensitive reading, which relished and gave due attention to every word. Her engagement with our literary heritage, here in the idea of “the face that launched a thousand ships”, a reference to the Helen of Troy of the great classical epics, was continued in her ‘Letter to Mr Dobbin’, an epistolary poem imagining the letter written in Vanity Fair by the remorseful Amelia Sedley to the spurned William Dobbin. Whatever a listener’s acquaintance with the novel, Morrissey created a powerful evocation of regret and repentance, transcending any literary context and making it relevant to all.

Demonstrating her fascination with history and its relationship to the present, she later read two poems dealing with some of the first instances of film and radio. ‘Electric Edwardians’ imagined the stream of life outside an Edwardian factory, inviting the listener to suppose that those bemused subjects are not only staring at the lens, but consciously staring at them – the viewers themselves in the present day. And yet this suggestion of continuity between the centuries was disturbed, and even belittled, as Morrissey noted that we would see more of the scenario described but for the fact that the edge of the film was rubbed off in a milk vat. Likewise, ‘Receiving the Dead’ used technology as a mechanism to glimpse into the extraordinary multiplicity of human perspectives. Couched in the speech of Sherlock Holmes to Dr. Watson, this poem played with the idea that the voices of the dead can be received on radio, overwhelming us with the scraps of their discourse, from pleasantries to domestic dispute. Each voice is unique, yet Morrissey simultaneously reminds us that they are insignificant in the whole tapestry of human experience.

Morrissey’s contemplation of communication and perspective took a different direction as she read ‘Puzzle’, her own answer to a problem set by the book of ‘Moscow Puzzles’ published in the Soviet Union. What should by expectation be a literal, mathematical answer is instead replaced by a response to the more troubling, deeper puzzles posed by Soviet (and indeed all) propaganda and the bureaucratic apparatus behind it. What suffering is it built on? When comes the inevitable end? Answers include ‘Ectoplasm’, ‘Oceanic White-Tip Shark’, and a peasant girl toiling her life away on a collective farm; in other words, we are reminded that all is transient and are shown the suffering belied by a bureaucratic façade. This certainly contrasted with the highly personal narrative of ‘Lighthouse’, which imagined a conversation between her insomniac son and a lighthouse visible from his window. Nonetheless, it was clear that Morrissey’s selection of readings was highly structured, incorporating a variety of narrative voices and subject matter whilst still maintaining thematic unity and leading to the climax of ‘Colliery’, the poem specially commissioned for the festival.

By her own admission, Morrissey had never previously visited County Durham, although her grandfather’s profession as a miner lent her some symbolic connection to the area. This therefore became the focus for her commission, which simply asked for a poem exploring Durham. In six sections, she dwelt on her father’s life as a miner: the joys he found in a honeymoon and racing pigeons, the traumas of the pit, the drudgery of its routine, its brief moments of escape. Culminating in an address to a racing pigeon, the poem had a hymnic and ultimately celebratory quality, as if a paean to the rhythms of life which sustained generations in County Durham. With the cathedral bells tolling outside, this thoughtful and indeed thought-provoking reading formed a moving conclusion to this year’s Book Festival.