Review: Half of a Yellow Sun, Chimamanda Ngozi Adichie 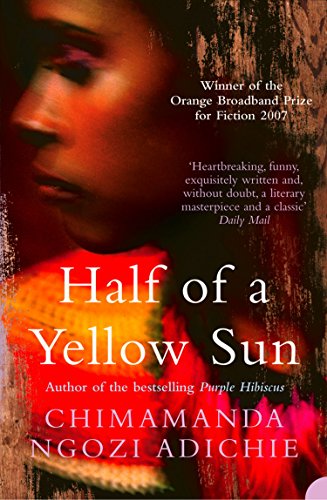 The old saying goes “Don’t judge a book by its cover”, but when I picked up Half of a Yellow Sun and saw that it carried Chinua Achebe’s stamp of approval on the back cover, I knew it would be worth a read. Half of a Yellow Sun is Chimamanda Ngozi Adichie’s formidable second novel and if you haven’t read it already, I suggest you head to Waterstones over the weekend. Seamlessly blending sensitive treatment of the Nigerian Civil War with tender exploration of human emotion, Adichie possesses a rare talent. But you probably knew that, didn’t you? Even if you haven’t read any Adichie you’re probably very aware of her; with the widespread critical acclaim of her short stories and her novels Purple Hibiscus and Americanah, she is fast becoming something of a literary superstar. If you’re not much of a reader but the name still rings a bell, maybe you’ve heard someone talking about her incredible TED talk “We should all be feminists”. Not only is this lecture now available in printed form but it was sampled by Beyoncé in her song “***Flawless”. As testament to her immense popularity, Chimamanda Ngozi Adichie was featured in Vogue this month, but it is clear to everyone in the literary world (and elsewhere) that she is not just “in vogue” but that her arresting talent and power as a feminist role model mean that she will have an enduring relevance for years to come. Of all the modern authors, the beautiful and talented Adichie is the one who I would read to my future daughter.

Set in 1960s Nigeria, Half of a Yellow Sun maps the pain of a nation against the pain of a handful of diverse characters. The narration is split between Olanna, a beautiful and intelligent woman with a prestigious family background; Ugwu, an observant and astute young man who comes to work for Olanna’s partner Odenigbo; and Richard, a somewhat adrift Englishman living in Nigeria who falls in love with Olanna’s alluring sister Kainene. The novel follows the three characters’ perspectives on the two main threads of the novel; the political tensions in Nigeria and the strains which Olanna and Odenigbo’s relationship is put under. While the narrative structure reveals that Ugwu can be saved from full knowledge of what goes on between Olanna and Odenigbo, he cannot be protected from the ravages of war and, after being conscripted, he nearly loses both his life and his faith in the world around him. But it is not just through Ugwu’s eyes that we see the effects of the war; through Olanna and Kainene we see the horror of refugee camps and the horror of starvation on the home front.

It is perhaps unsurprising that the screen adaptation of Half of a Yellow Sun failed to gain the widespread success of the novel: despite the fact that it numbers Chiwetel Ejiofor and Thandie Newton amongst its impressive cast, it fails to capture what really makes the novel special. Adichie has a talent for including small, beautiful details that make her writing incredibly true to life and touching; it would be impossible for even the most talented filmmaker to capture this talent and project it onto the big screen. With the rights to the later novel Americanah being optioned by Brad Pitt’s production company, Adichie’s work will soon reach a wider audience and be given the big budget, “Hollywood” treatment – although it remains to be seen whether anyone, even with all the money in the world, could possibly convey the nuance and sensitivity that makes her writing so unique.

Half of a Yellow Sun is itself so exceptional because it gives a voice to the citizens of the short-lived secessionist state of Biafra, a people who were persecuted and starved during the war and whose struggles were swept under the rug by the international press – these people risked their lives to be part of an independent Biafra even when Biafra had not even been granted international recognition. Adichie’s novel is an example of the infinite power of the written word: by writing Half of a Yellow Sun she gives a voice to an oppressed nation and proves that the Biafrans’ struggle will never be forgotten.