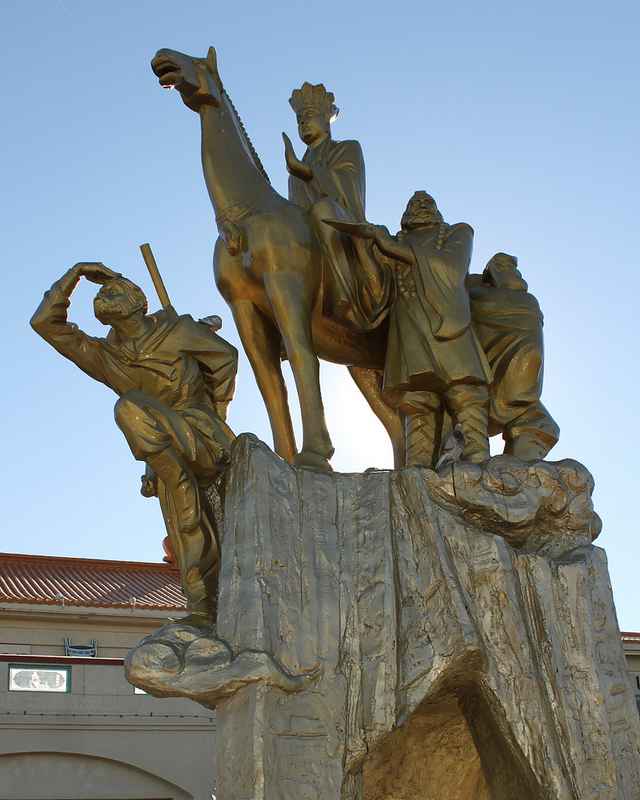 The characters from Journey to the West depicted in a staute in Chinatown, Las Vegas

The book itself, of course, exceeds both of these quasi-adaptations. Indeed, I suspect that most adaptations of the work fall flat entirely; there have been dozens of films and TV series, as well as comic books and manga, and though many of them are very good in their own right, nothing can capture the tone, the magic, of Journey to the West.

That’s really the best word I can use to actually describe the novel: magical. While Journey to the West lacks the phenomenal prose of Water Margin or the psychological depth of Dream of the Red Chamber, it more than makes up for it by simply being a very fun story. I think that in analysing literature, we sometimes tend to overplay the artistic qualities of a novel and ignore some of the fundamentals. Journey to the West absolutely nails the latter – what the reader is presented with is an exciting, if rather simple, tale about a group of heroes that is pleasurable and engaging to read. There’s not much more than one can ask from a good book.

As always, there needs to be a quick discussion about translations. By far the most popular English translation of Journey to the West is Arthur Waley’s Monkey. This version of the tale is very heavily abridged, focusing on the core narrative and leaving out most of the side-episodes and the like. As such, we are left with a novel that is only roughly one-sixth of the original work. I cannot stress enough how pitiable that is – while Monkey reads very well, it presents a tale that is purely comical. While there is no doubt that Journey to the West is very humorous and highly entertaining, Arthur Waley consciously decided to leave out some of the more thematic aspects of the story.

The Anthony C. Yu translation however – the translation that I opted for – is quite a bit more extensive. Yu translates all of the songs, poems and Buddhist chants that are abundant in the novel into perfect English, conveying some of the more spiritual undertones of Journey to the West. Moreover, he manages to translate the entirety of the colossal text, and it seems that it certainly keeps the original’s sense of humor.

Journey to the West was first published in the 16th century in China, and is generally attributed to the author Wu Cheng’en. Unlike the other Four Great Classical Novels, Journey to the West has some basis in real events. The story follows the journey of a Tang Dynasty-era Buddhist monk by the name Xuanzang who travels to the ‘West’ in order to obtain sacred texts and return them to China. Xuanzang was indeed a Tang Dynasty monk, who, motivated by the poor quality of Chinese translations of Buddhist scripture, traveled to India and brought back more accurate scriptures.

That is where the connection to history ceases, however. Journey to the West’s main character is not even Xuanzang – it is one of his companions, a magical, demi-god of a monkey by the name of Sun Wukong. Sun Wukong accompanies Xuanzang, along with two other companions, to the West, in search of his own enlightenment and redemption for past sins.

The novel in itself is split up into episodic chapters – every two or three chapters cover a particular episode, which generally has to do with Xuanzang getting captured and his brave companions coming up with a plan to rescue him, or Sun Wukong somehow doing something rather stupid and everyone else rescuing him. This seems fairly simplistic in terms of its structure and that’s because it is – the narrative that Journey to the West follows is not at all complex, but at the same time it is not lacking in depth, either.

A common motif that comes through in the novel is one of fellowship. Each of Xuanzang’s companions, including Sun Wukong himself, is very faulty. Zhu Bajie is lusty and bullish. Sha Wujing lacks any sense of intellectual drive and is perhaps blindingly servile. Sun Wukong is arrogant and has a knack for getting himself into trouble for no good reason. These are all gross simplifications on my part – each of these characters has a great deal of psychological depth. Indeed, even Xuanzang is faulty; he does not trust his companions as often as he should and as a result is taken prisoner or is delayed on his journey.

But, at the end of it all, all of these characters make it to the West. That isn’t really a spoiler. Journey to the West never gives merit to the idea that its characters will fail – the point isn’t that they cannot reach the West, but rather, that they can only reach it together. Although Sun Wukong has godlike powers, he has to rely on his companions in order to protect his master, and Xuanzang would not stand a chance without the loyalty of Wukong and the others. That is the principle theme of the novel, which, I think, links back to Buddhist ideals of fellowship and selflessness rather nicely.

It is clear, then, that Journey to the West is much more than meets the eye. Even if you should choose to read Monkey instead, you will not be disappointed – at its core, this is a comical adventure that refuses to take itself too seriously and yet conveys a powerful message nonetheless.