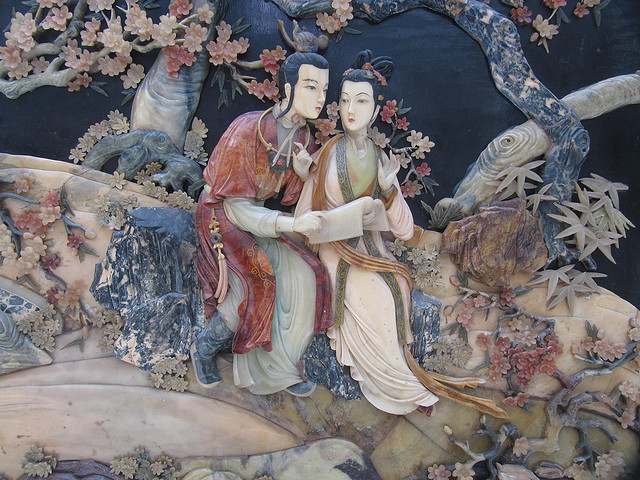 A scene from Dream of the Red Chamber

I must warn the reader going in that this particular article will perhaps not be quite as critically analytical as others in this series on non-Western literature – but there is good reason for this. Dream of the Red Chamber is one of the most acclaimed works of all time, having enjoyed great prestige in China but relative anonymity in the West; moreover, this book is perhaps my favorite novel of all time, and for an avid reader like me that is certainly something special.

What is immediately remarkable about Dream of the Red Chamber is its size and complexity. This is, without question, the longest book I have ever read. I read it on the Kindle, so cannot comment on the exact print length, but I suspect that the novel is well over 2000 pages long. This might perhaps seem quite intimidating to some readers. After all, it could very well be argued that no book actually needs to be that long. However, I would disagree. Dream of the Red Chamber is precisely as long as it has to be.

Before I delve into the plot and themes of the book, it would be wise to address a very important issue. Due to its length and, presumably, its lack of popularity in English-speaking countries, there are not as many celebrated translations of Dream of the Red Chamber as the other three Great Classical Novels. Admittedly, it would be a great undertaking to actually translate the work – Cao’s prose has a very unique style, blending various dialects and colloquial language. Moreover, classical poetry is integral to the novel, with dozens and dozens of both old and original poems being critical to the book’s themes and plot. The version that I read was the translation by Gladys Yang and Yang Hsien-yi, which was published as a single volume. However, I would suggest picking up the translation by David Hawkes, under the alternate title The Story of the Stone. This is split into several novels, so could wind up being rather costly, but it is worth it. Unlike the Yangs, Hawkes does not focus on a simple word-for-word translation –he does his very best to maintain the creative integrity of the work, and reading it is simply a pleasure.

The novel is centered around the fictional, aristocratic Jia family in the imperial capital of Beijing during the mid-Qing era. The principal character is the young Jia Baoyu, a teenage boy who is heir apparent to the wealthier branch of the family and had been born with a jade in his mouth, an incredibly auspicious omen. The book follows Baoyu’s domestic life and struggles, as well as the declining fortunes of his family over the course of several years.

That is exciting in and of itself – this is an epic that remains decidedly ‘normal’ in its character, generally avoiding the far-fetched and the fantastical but choosing to focus on a narrative this is much more human. But Dream of the Red Chamber is much more than just that.

What is most remarkable about the book and indeed Cao Xueqin’s impeccable writing is that the novel has around forty main characters, with hundreds upon hundreds of supporting ones. Moreover, each of these characters really does come across as a unique entity – these are not caricatures designed to make an explicit thematic point, as is the case in Water Margin and the other Great Classical novels, but rather these are rounded, well-developed characters.

The novel is thus profound in its themes. Indeed, in China there is a specific scholarly tradition which is aimed to understand Cao’s novel and interpret it in various ways – this discipline is aptly named redology. This alone should serve to indicate just what an impact the work has had in the region.

The rise and fall of the Jia family can be compared to the fortunes of the Qing Dynasty itself, which, in Cao’s time, was beginning its slow but marked decline. There is a psychological impact to all of this – when the Jia family finally over-stretches itself, various corrupt practices are revealed and anyone that can be made implicit is punished. This is perhaps an examination on just how our actions can affect those around us.

Moreover, with regards to Baoyu, there is a semi-autobiographical element to the work, with various redologists having suggested that Baoyu is actually Cao Xueqin himself. Baoyu is a rather happy-go-lucky child, not conforming to the contemporary gender stereotypes of the day – he surrounds himself almost entirely with female friends, dedicates himself to poetry as opposed to disciplined studying, and a large portion of his narrative relates to his relationship with Lin Daiyu, a distant relative that came to stay with his family in the beginning of the novel.

Indeed, while the other Great Classical Novels can be seen as rather misogynist, due in part to the sensibilities of the time, no such accusation can be made towards Dream of the Red Chamber – most of the prominent characters are women, and most of these women have a sense of agency and independence about them. Not only does this seem to shatter the idea that Chinese women were immobile and powerless, but it could also have been a way for Cao Xueqin to honour all the women that he admired.

However, ultimately a key theme to the novel, which is presented through Baoyu’s heartbreaking exploits, is that romance and the affairs of the heart should never consume your life. I think this is a rather poignant message for our generation in particular – many of us come to university obsessing about the state of our relationships, often overlooking other important aspects of life. Indeed, in the beginning of the novel, Baoyu is presented with a prophetic dream, where he is presented with various women that he would come to be enamoured with throughout the book – he is warned not to become too preoccupied, but this is a warning that he never heeds.

This only scratches the surface of just how reflective and philosophical the book is. There are multiple overlapping themes and dozens of interpretations for Cao’s writing, but there is a single consensus amongst scholars: Dream of the Red Chamber is a masterpiece of literature.