NaNoWriMo: Why You Need Your Novel 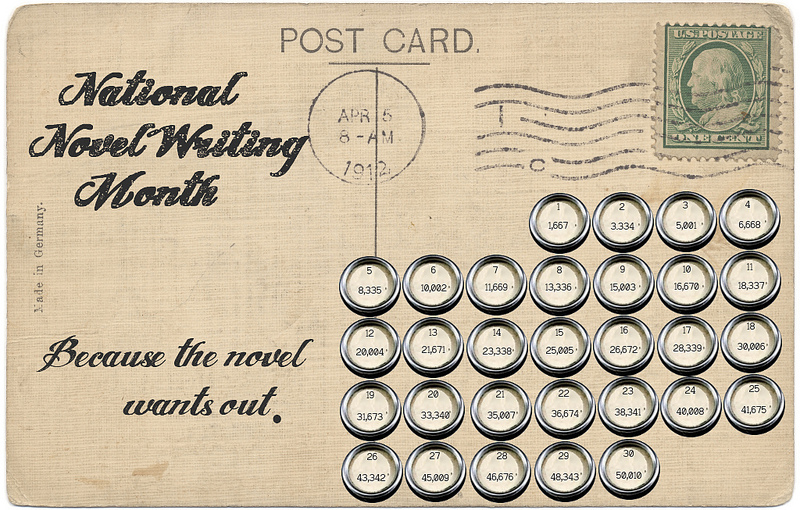 NaNoWriMo ‘encourages absolutely anyone who has ever wanted to write a novel to give it a shot’.

At fifteen, I discovered the existence of National Novel Writing Month (handily abbreviated hereafter as ‘NaNoWriMo’) and immediately thought that it was an amazing idea. For those of you who haven’t come across the phenomenon before, NaNoWriMo is an event that takes place annually in November, which encourages absolutely anyone who has ever wanted to write a novel to give it a shot. Participants sign up online on November 1st each year and begin working towards completing a 50,000-word novel (just about the equivalent of an MPhil) by November 30th. NaNoWriMo’s website is there to encourage these would-be authors with ‘pep talks’ and access to other handy tools like writing forums; participants are also encouraged to update a running total of their word count as the month progresses. 2013 saw 341,375 successful submissions – a pretty impressive total – but something makes me doubt that all 341,375 of these ‘novels’ will make it as the next literary blockbusters .

If the motto of NaNoWriMo back then had been, as it is now , ‘the world needs your novel,’ I would have agreed wholeheartedly. I embarked on a weeklong enthusiastic frenzy in which I wasted about fifty sheets of notebook paper (I still write all my first drafts longhand) and clocked in at about five thousand words. I was proud. Then I ran out of ideas, shelved that NaNoWriMo attempt, and never did come back to it. Five years later, I decided to attempt NaNoWriMo afresh , if only because I wanted to flake out on things less. However, my twenty-year-old self had just declared a major in English and, I thought, next to literary giants like William Faulkner and James Joyce, who was I to rush through a mind-boggling 50,000 words and call it a novel? My second attempt at NaNoWriMo ended after just three days. Personally, I doubt that I’ll ever try NaNoWriMo again, not only because November is a logistically awful month, but also because now that I’ve had some time to mull it over, there’s something wrong about writing a novel when you don’t have plot (one of NaNoWriMo’s past slogans has been ‘No Plot? No problem!’ – I’m of the humble opinion that we can’t all be Virginia Woolf), and most importantly, there seems to be something fundamentally irresponsible about telling an amateur that ‘The World Needs Your Novel.’ I could well argue that Stephenie Meyer’s Twilight Saga or E. L. James’ Fifty Shades Trilogy arose out of the belief in NaNoWriMo’s motto, even though neither of those works were specifically produced for NaNoWriMo. I’d just like to briefly say that the literary world would possibly look much brighter without Twilight or Fifty Shades; even as I’m about to dismantle my own argument by noting that Sarah Gruen’s enjoyable Water for Elephants was written as part of NaNoWriMo (and has since been made into a film), my stance doesn’t change: it’s likely that the world doesn’t need your novel. As Rebecca Armstrong puts it, ‘even the most self-obsessed would-be Hemingway will admit to themselves that it probably doesn’t.’

However, while I don’t understand why the world needs your specific novel, I am still going to maintain the fact that NaNoWriMo serves as an important communications tool for those of us who enjoy writing. I’ve never once participated in a writers’ meetup at Starbucks, or clicked through online forums dedicated to NaNoWriMo, but I suspect those events and outlets are specifically designed to make writing a slightly less lonely endeavour. However, no amount of (internet) socialising will change the fact that writing is, at its core, all about the author-to-be spending an undue amount of time with either paper and pen, or a laptop depending on one’s preference. Perhaps the writer has dreams of how one day they’ll gain a real audience and a fanbase proper, so that they’ll never be lonely again. I want to put forth the idea that NaNoWriMo could be much more useful to us as writers if authors were to believe in a slightly amended tagline – you need your novel.

Surely you’ve all heard or read the phrase somewhere, that you should write for yourself. I concede that this sentiment is especially hard to follow because writing is lonely and we are social creatures, whether some of us like it or not, but there’s something to be said about making an effort to write the novel you want to read. Stephen Fry writes in the Afterword to his novel Revenge (also known as Stars’ Tennis Balls in the UK) that while most people don’t believe themselves to be ‘natural’ Mozarts or Beethovens, it is a popular belief that we all have a story to tell somewhere within ourselves. Fry also points out that we as readers are maybe a little hardwired to feel innately jealous when we peruse cheap paperbacks at the store. Of course we could have written something better. It is true that a novel is meant to be read and enjoyed by an audience, but our current world today is one that maybe over-privileges the fact that there’s an economically-viable audience out there, and one can’t be a ‘real’ author unless the author’s work rings true to that group of mythical readers in some way. By focusing overly much on the general public audience, we frequently forget ourselves, the most important reader of all.

By becoming your own number one fan, there are obvious advantages. The first being that writer’s block and grasping for inspiration become less of a problem. If you are invested in your writing for reasons other than monetary gain, it is probably going to be a lot easier to write for thirty days without much sleep. In just thirty days, you will be able to read the novel that you’ve always been searching for. It may well be a shoddy first draft, but a physical draft at least exists now, and you no longer have an excuse not to polish it and make it great. Your NaNoWriMo product may one day become the novel that the world doesn’t know it needs yet.

To sum up: if November 2014 comes around and you’re itching to write a novel, go for it! Love what you read, love what you write, and have a great time. Go to meetups and mingle with your fellow writers, so that you may commiserate with them on the Internet later as you break your backspace key. I am sure you’re in for a wonderful experience. Just remember: it does not matter if the world goes on without your novel; there are more important things, not least of which is the fact that your novel needs you too.