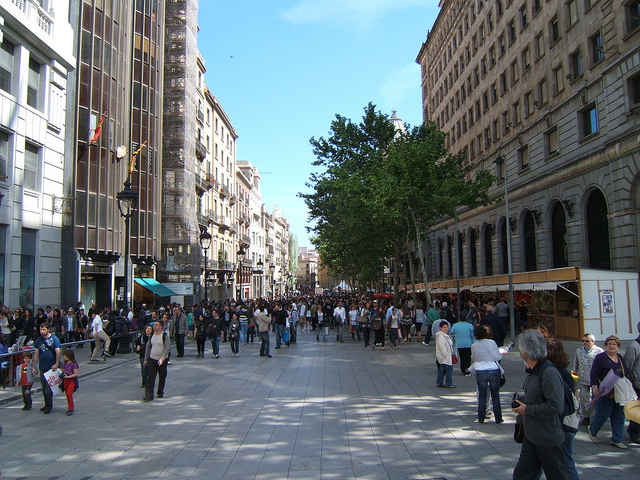 Barcelona: one of the most vibrant, cultural cities in the world, but would you think of literature when confronted with an image of the city? Dominated by the looming façades of Gaudi’s Modernist architecture, with parks, beaches and bars everywhere you go, it’s one of Europe’s must-see destinations. However, within this labyrinthine, otherworldly city, there is more than meets the eye. Barcelona does not consider itself ‘Spanish’, but ‘Catalan’: an autonomous community, with a completely separate language and culture. It is also fiercely proud, as evidenced by the independence movement gaining momentum in the region. Shunned and repressed by Franco during the thirty-nine year dictatorship of Spain, Catalan literary culture was pushed underground, only to come bursting up to the surface just before and then immediately after Franco’s death. Literature is of paramount importance in the cultural fabric of the city: the publishing capital of Spain, there are even several bars dedicated to the love of books. Nearly forty years of repression has done little to dent enthusiasm and production, and the publishing industry in Catalan especially keeps growing.

First, I’ll talk about El dia de Sant Jordí, exactly the same as St George’s Day in the UK. The patron saint of Catalunya, it is celebrated on the 23rd of April every year and is a regional holiday. However unlike in the United Kingdom, it isn’t dominated by far right political parties. San Jordí is a celebration of books and flowers. Piles and piles of books are sold everywhere: street corners, roads, shops… basically anywhere you can think of. It’s the same with flowers, most specifically roses. Roses of every colour are cultivated specifically for this day and sold all over the city in the same manner as the books. Traditionally, Catalan men receive a book and women receive flowers from their partners or loved ones but obviously that’s quite a flexible tradition. This festival alone is a must-see event, and demonstrates the importance of literature in the city.

Next, you only have to look at all the literary bars dotted around the city to notice how important books and publishing are here. From Els Quatre Gats in the Gothic quarter, to Lletraferit (lover of literature) in Raval, these bars have played host to some of the most famous literary and cultural figures of the modern era, including Lorca, Picasso and Dalí. Although there are famous bars in every major city where intellectual and creative minds gather throughout the ages, perhaps none of them are as overtly literary as those in Barcelona.

One of the most interesting things about Barcelona from both a literary and linguistic perspective is language itself becomes problematic. Although the majority of people living there are bilingual in Spanish and Catalan, as it is decreed by law in the Spanish Constitution that it’s necessary to learn Spanish to be a citizen, many people in Barcelona consider themselves strongly Catalan and in fact not Spanish at all. As the most recent independence movement gathers momentum, nationality and identity becomes an increasingly controversial issue. It’s interesting to extricate from this mess of nationalism and conflict what Catalans truly believe about themselves, because where is a culture’s identity and values more strongly reflected than in its literature? With this in mind, the Catalan literary scene experienced a strong renaissance after the death of Franco: poets such as Joan Brossa, and novelists such as Josep Pla, won awards for their work and helped to put Spain back on the cultural map after a long period of austerity and repression.

Yet perhaps one of the most seminal modern works reflecting this extraordinary city is, curiously, not written in Catalan at all. The Shadow of the Wind, by Carlos Ruíz Zafón, is a thrilling, passionate race through the dark gothic streets of the city, during the subdued, fearful years of the dictatorship. Daniel the protagonist’s life is shaped by books, and when he comes across a book that will change his life in the austere but magical ‘Cemetery of Forgotten Books’ he is charged with looking after it forever. However, he is stalked by a malevolent force intent on destroying this book, and as Daniel tries to find out more about its mysterious author, he is taken on a journey of despair, love and fear. Zafón is truly a master of the cliffhanger, and his dark, melancholy prose ensures that you won’t be able to put the book down. He perfectly captures the mood of Francoist Spain. Again, this is a novel that marks books as seminal points in the road to maturity, a bildungsroman in a time where progress was stagnant.

Although not one of the more ‘traditional’ cities noted for literature such as Paris or New York, Barcelona is definitely one of the most interesting. A double-layered culture mixed with a painful history, and a lifelong pride in literature ensures that this city is one of the most vibrant and fascinating places to go if you’re a book lover.