Lighten the load of your bookshelf this summer… and don’t feel guilty about it! 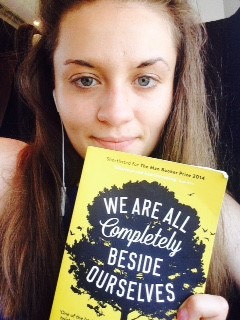 Emily Wootton and her latest ‘lightening’ read: We Are All Completely Beside Ourselves by Karen Fowler

What are your guilty pleasure reads? I am not just talking chick lit; if you are a full-time English student like me, anything not on the department’s vacation reading can feel like a ‘light’ read, and many of us can feel guilty for indulging in it. For me, it’s the latest bestsellers, the novels that people are talking about now, that lighten my bookshelf. Working at WH Smith as a sixth form student made these easy to spot, but a quick browse of Amazon’s best sold fiction page will point you in the right direction.

I am going to talk about the importance of keeping engaged in the current literary scene as well as ticking off those must-reads from the past. In fact here seems the best place to mention that my favourite book was only published in 2011, winning the year’s Man Booker Prize Award for fiction. Julian Barnes’ A Sense of an Ending for me is an interesting twist on Alan Bennett’s much-loved play The History Boys, what with its Oxbridge backdrop and the witty classroom scenes that open the novel. My reason for mentioning Barnes’ work here is that the contention of this article, our literary choices, is encompassed by the narrator’s university bookshelf. He recalls his girlfriend’s inspection of his bookshelves and how he hopes to impress her with his choices. Here is an extract from the novel, I think you will agree that the anxious musings of this university student is relevant to my case:

‘My bookshelves were more successful with Veronica that my record collection. In those days, paperbacks came in their traditional liveries: orange Penguins for fiction, blue Pelicans for non-fiction. To have more blue than orange on your shelf was a proof of seriousness. And overall, I had enough of the right titles: Richard Hoggart, Steven Runciman, Huizinga, Eysenck, Empson… Veronica paid me the compliment of assuming I’d read them all, and didn’t suspect that the most worn titles had been bought second-hand’ (Julian Barnes, A Sense of An Ending)

I have recently returned from a tour of Italy with one of my English course friends. In-between site-seeing in the Italian cities and aboard a plush Trenitalia service, I managed to plough through a book I had wanted to finish for a while. While my travel companion occasionally flicked through Conrad’s The Secret Agent in preparation for the second year ‘Literature of the Modern Period’ module, I was happily making my way through Karen Fowler’s latest novel We Are All Completely Besides Ourselves, something many of you would never have heard of, unless you are an avid Man Booker fan like me. Fowler’s novel made it onto the Booker shortlist in October 2014 and so pulled in by its blurb of a childhood experiment and talkative girl gone silent, I thought I would give it a whirl.

Now we all have different definitions of what makes a ‘light read’ and I am sure my friend was laughing inside as I tried to explain that I was reading about a family who had adopted a chimpanzee. Rosemary, the novel’s narrator, is the chimp’s experimental sibling in her father’s family based experiment, information we are not disclosed until a sizable chunk through the book. Ridiculous as it may sound, I learnt a lot about family, love and what unites us, the very kind of lessons a literary classic can try to teach you.

So here are my top lessons from the novel…

2) Silence can be golden – The narrator values silence, a trait cultivated through her increased secrecy surrounding her abnormal family. Silence is something I think most of us wish we had kept from time to time in our lives. In this way the narrator and protagonist is wise and relatable, just as we hope when picking up any first person narrative. Here Rosemary speaks of her conversion to silence: ‘the spoken word converts individual knowledge into mutual knowledge, and there is no way back once you’ve gone over that cliff.’ I am not advocating silence on more serious issues, but there are lessons here on when we should speak out and when we should prevent the conversion of knowledge.

3) People believe in things – Rosemary and Fern’s brother is central to the activism played out in the novel. Lowell is a ruthless member of the ALF (Animal Liberation Front), going to extreme lengths to hinder harmful experiments performed on non-human animals. The passion felt for his sister’s welfare is at the heart of the novel and is one of its greatest lessons in love.

Therefore, given the themes of the novel, I can maintain that this non-classic was worth my time reading. Fowler’s literary form is also certainly praiseworthy, with use of flash backs, lists of childhood memories and an experimental use of temporality.

So with the Man Booker 2015 longlist being announced at the end of its month, it may be time to lighten your bookshelf without feeling guilty about it. You will gain a lot from whatever you decide to read this summer, so it is really worth building a contemporary novel into that summer reading list, if you have not done so already.