Olivia Freeman-Barrett in Literature on 28 November, 2019.

I thoroughly enjoyed reading ‘Into the Water’ by Paula Hawkins. I had previously read ‘Girl on the train’, so I was in great anticipation when reading this book. Although, the ‘Girl on the Train’ remains my favourite Hawkins novel, this novel is still a brilliant read.

The text is set in the fictional town of Beckford, however Hawkins makes it clear that it is set up North, with mentions of places such as ‘Pity me’ in County Durham, Gateshead, Chester Lee Street and Newcastle. I surprisingly found great enjoyment in reading a text so close to the city of Durham. It allowed me to visualise the setting better, and the distance between the places, as well as making the story feel more real, as the places mentioned are so close to where I was reading the text. Of course, a knowledge of the places are not necessary to enjoy the text, as it simply provides context, however for people living near Durham, it was a pleasant addition  to the novel.

The most important element of the setting is the river. The river carries the plot, as the story is focused upon the drowning of what’s called the ‘troublesome’ women. The main story is focused on the drowning of ‘Nel’ but the story also looks back at other deaths, such as the suicide of Katie Whittaker, and other famous women known for drowning. The nautical setting with the water reminded me of Conrad’s ‘Heart of Darkness’. The river is described to be everywhere in the town, with an inability to escape it. The river dramatizes the setting, due to its constant threat of death, but also one can’t help but feel the river holds all of the secrets, ones which the reader and the fictional characters desperately try to discover. The setting of the river in a cold environment such as the North, adds a cooling, frosty tone. Whereas in an exotic setting, water can be a sign of paradise, and renewal; here it is a river of danger and power, flushing the novel with a sinister tone. Additionally, a river can be an indicator of travel, as people use it to move places, but here it does the exact opposite. It holds the characters in as they are drawn to the river and there are moments where you see some characters try to escape the village, but this appears to be harder than it initially looks.

There are many characters in the text, which was initially confusing. At the beginning of the book there is a description of all the characters, and I found myself having to constantly refer to that list, to understand the connections between the characters. The chapters are structured by showing different characters point of the view ; the chapter would be titled with the character’s name, and then you were shown their viewpoint of the story. This is how the plot is cleverly built, and the ultimate mystery is resolved through the exploration of each characters experience. Once you begin to make links between the characters the story is resolved. I do agree that all of the characters add a great depth to the text, however initially it can be confusing, and the reader can find themselves lost among all the names.

I was very impressed by the presence of the character of ‘Nel’ throughout the text, even though due to her death she is absent and never makes a present appearance. A vivid and detailed image of her is created. She is present in the flashbacks, but otherwise only through descriptions by other characters. Even so, I felt as if I got a really good rounded picture of what Nel was like. The story is focused on her, however it is the other characters who are the protagonists, because although the novel focuses on the death of Nel, it mostly focuses on the aftermath of the people left behind. For example, a lot of time is given to focusing on Nel’s daughter, who doesn’t grieve in a conventional way, and her behaviour and responses add more mystery to the text, wondering ifshe knows more than we think she knows.

The beginning of the text throws the reader straight in to the action. The ‘thriller’ genre is certainly satisfied by the opening of the text with mystery, and suspicion. The end of the text is also rapid and it was hard to put the book down, as the reader finally got to discover all of the secrets. Even up to the last page, the reader is immersed in ambiguity and left with lots more questions, which it is up to their imagination to conclude. I did however find the middle of the text to be quite absent of action. I understand that it is important to slowly build up to the secret, but a part of me felt that the reader needed to be told more information quicker. There is a large section in the middle of the text where there is little revelation, leading to the threat of a reader losing interest.

I loved the front cover of the book, it certainly does represent the tone nicely, and the caption ‘Secrets can pull you under’, is effectively intriguing. The cover also identifies the text as a thriller, which it most definitely is. I can imagine this book would be a fantastic film, so like Girl on the Train, I would love to see it recreated, as the settings and the characters are a great foundation for a successful film.

Overall, I would probably rate this book a 8/10. I would most definitely recommend it to anyone, but I did prefer ‘Girl on the Train’, as there were aspects of the text which could have moved quicker. However, it is an extremely well-constructed text, with brilliant intertwining subplots and characters, and definitely one to get your teeth in to. I don’t want to say too much more, as to ruin the mystery with spoilers, but it is one of those books that you become desperate for your friends and family to read, so you can talk to them about the ending, and the secret to what happened to these women found in the river. 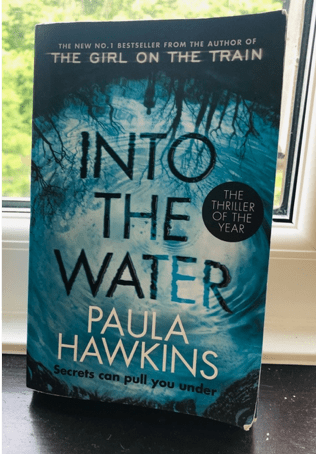 The featured image is the authors own photography.