Charlotte Pooler in Literature on 3 February, 2014. 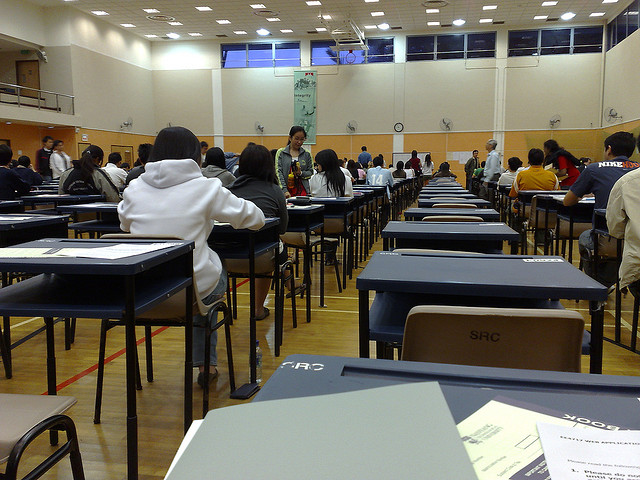 Have changes to the system made literature exams even more of a headache?

More changes to the exam system in English schools? What’s new. That’s what I thought until I read about Exams regulator Ofqual’s planned shake up to GCSEs. Am I the only one who thinks our exam system is constantly and unnecessarily shifting? I was one of the first years to have the A* introduced at A-Level and neither my 25-year-old brother nor my 22-year-old sister seem to have even got their head around that. But that change is miniscule in comparison to the proposed adjustments by Exams regulator Ofqual. This time, things really are changing and those who turn 13 in this academic year will bear the brunt of it.

The head of Ofqual, Glenys Stacey has glorified the modifications as “the biggest change in a generation”, arguing “they [GCSEs] have been around for over 25 years, but now we are seeing fresh content, a different structure, high-quality assessment coming in.” However, arguably quite comically, rather than an innovative new development, it seems to be a return to the 1970’s format of O-levels. Back then, the grading system was numerical and, as of 2017, GCSE exams will be graded from 1 to 9, with a 9 being the highest. However, a fail will still be a “U” for an unclassified result. Never mind my brother and sister’s confusion over the A*; pupils, parents and employers will be bewildered by this major shift. The other key similarity with the O-level system is that modules will be eliminated, so all exams will be taken at the end of the two-year course. Of all the nostalgic memories of GCSEs that came flooding back when I read about these changes, the one that didn’t return fondly was the absolute marathon of exams in the summer from the sheer number of subjects that you study. So, my heart goes out to the future pupils who have the added crippling pressure of their entire GCSE grade resting on one exam, rather than half or at least a third. It may seem like good practice for later life, particularly university finals, but putting that amount of pressure on 16-year-olds is just excessive and really quite cruel.

But it isn’t all doom and gloom. In fact, there are some undeniable advantages to the proposed changes to the study of English at GCSE-level. Students will study new courses in English language and literature, being expected to “study whole texts in detail, covering a range of literature including Shakespeare, 19th century novels, Romantic poetry and other high-quality fiction and drama” for examinations. Studying whole texts in detail isn’t anything new, but the enhanced focus on a range of literature is brilliant. I was very lucky with my GCSE texts: Romeo and Juliet, An Inspector Calls and To Kill a Mockingbird, alongside a modern anthology of poetry. I really enjoyed my GCSE English literature course, but possibly a little too much; always feeling the selection slightly arbitrary and extremely contemporary (apart from the Shakespeare of course). Albeit highly enjoyable, I wasn’t set up well for a more challenging A-Level course or degree level English at all. The jump up to older literature at A-Level was a struggle for many of my peers. If the new course takes a more holistic approach – which it seems to aim for – that can only be a positive development. I would have loved Romantic poetry because I sadly never actually studied it at school. Moreover, it’s far more rewarding to study an era of poetry rather than an anthology, but I know other students, particularly those less enthusiastic about literature and not carrying it on at A-Level, really liked the anthology format of the poetry section. So maybe it’s impossible to please everyone!

We will also see a greater focus on things like spelling, punctuation and grammar. This is absolutely a positive change and one that desperately needed to happen. It’s important to remember that GCSE English language and literature is a grounding for the vast majority. Not everyone carries it on, so it’s fundamental to hammer home the basics. Although it’s fantastic to be encouraged to express yourself without constraint, in my opinion that really comes into its own at A-Level, and if correct expression comes to students without thinking, thanks to appropriate teaching at GCSE-level, so much the better. We’ve lost sight of the fact that pupils need to understand the basic importance of spelling, punctuation and grammar and quite how important it is to facilitating understanding. Call me a die-hard traditionalist, but teenage text language isn’t going to cut it.

Similarly, there will also be a reduction or scrapping of coursework – for me, that would have been a blessing, because unlike apparently the rest of the universe, I actually hate coursework. Bizarrely, I perform much better under exam conditions and think I actually grew premature grey hairs over drafting and re-drafting my coursework at school. However, for most, being able to refine an essay several times that will count towards your final grade is more than you could ever ask for. Snatching it away from those appreciative students will not be met kindly. But is an exam-heavy approach appropriate to literary studies? It does seem strange to study a small selection of texts so intensely for two years to then frantically write on one of them for what may only be half an hour. Labour MP Kevin Brennan agreed that the pendulum “might have swung a little too far on coursework”, but there is now a danger that “it will swing too far the other way”.

Kevin Brennan seems to have hit the nail on the head – it’s finding the balance in education and curricula that seems to be a great struggle to our English system. Generally, Ofqual’s proposed changes appear dramatic and unnecessary. “Why numbers? Why no modules? Why no coursework?” I can hear the students cry. Nevertheless, from a literature course perspective, there actually seems to be some merit in the adjustments. Will students enjoy their English GCSE more because of these changes? Only time will tell.