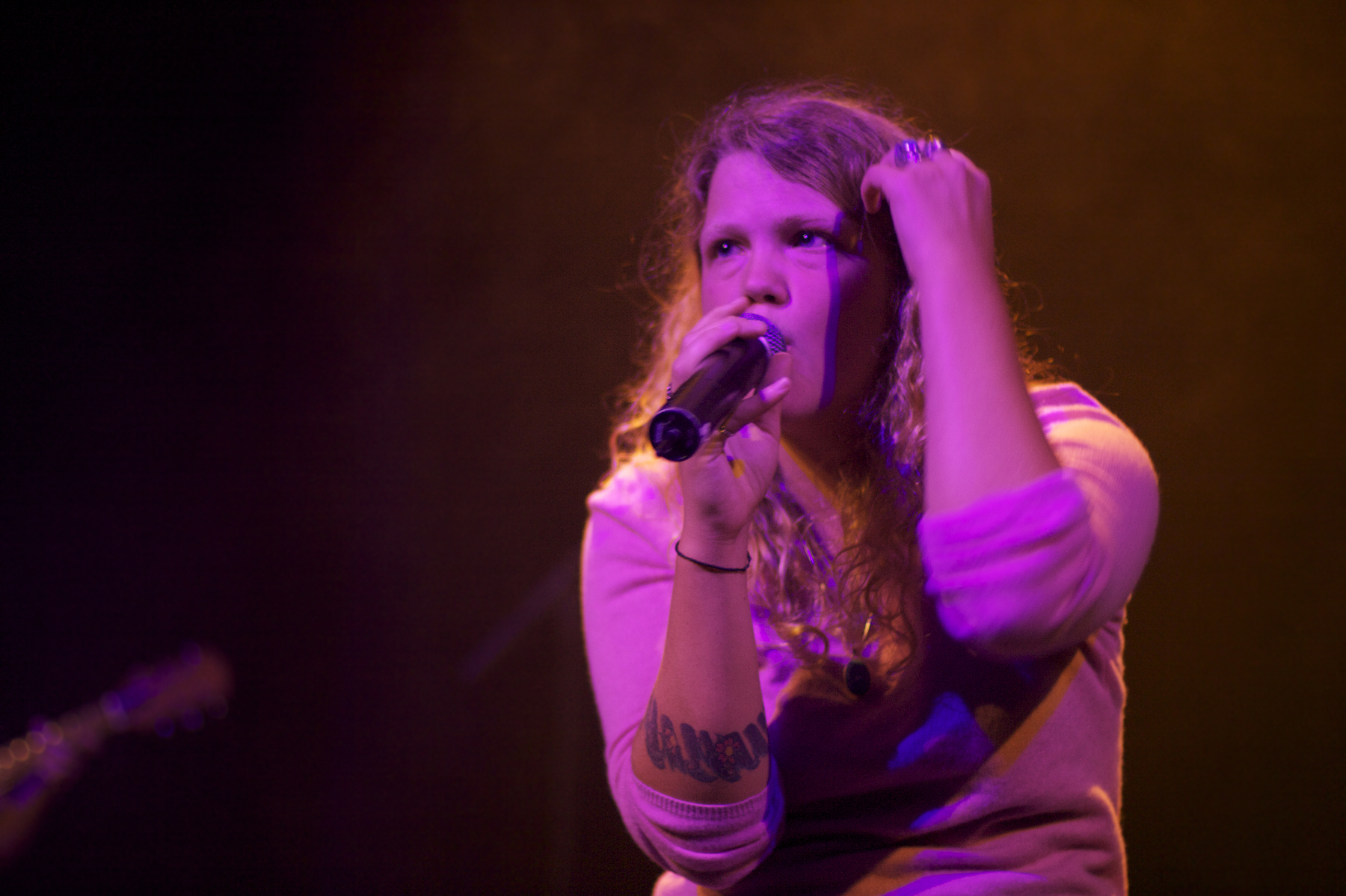 “Language lives when you speak it. Let it be heard.”

Kate Tempest’s performance of her collection ‘Hold Your Own’ at the Gala Theatre on Friday 17th October was brilliant and completely captivating. She spoke the words with passion, at times almost singing and pleading, at others with a light-hearted comedy. There was a huge contrast between the poet who spoke with such power and Kate herself who between the poems was humble, funny and very down to Earth. She told the audience how she had visited Durham for the first time that day and that it was a special place as her father had lived there. I left the theatre feeling a bit dazed, stunned and awed, and as I write this I can still hear the echoes of her powerful words in the back of my mind, inspiring me to try and write in a more poetic way. Kate’s poetry is beautiful, raw and bold. There is no clear structure, the lines flow into each other and are a multitude of different styles, tones and lengths. There is also a rhythm through all her work which begs for it to be spoken. Her poetry is very complex and sometimes I was uncertain what a line or passage meant, but you can gain a general sense and meaning from each poem. Her collection is based on the myth of the ancient Greek prophet Tiresias but encompasses so much more – as she stated in the performance, “some of the poems are written as if by Tiresias, some by me and some by you”.

In ancient literature Tiresias is emblematic of prophecy, the token prophet who appears again and again, a bit like Stan Lee in the Marvel films. In the Odyssey, he warns Odysseus to stay away from Helios’ cattle, in Oedipus Rex he warns Oedipus to stop investigating the murder of Laertes and in Antigone he warns Creon not to punish Antigone. In all three of these examples, he warns the characters but despite this it happens anyway and all he can do is witness the tragedy he tried to prevent. Particularly in Greek tragedy, he is even scorned and treated with resentment. Perhaps this then is what Kate Tempest is alluding to – the tragedy of the prophet who sees everything and tries to tell people but can only watch as they go along and do it anyway. In a collection which seems to mingle the perspectives of Kate and Tiresias, perhaps she also relates this to the poet. It seems to me that poets are able to look deeply into the world and stare unflinchingly at all its hard truths. They can see everything and they share this in their beautiful words, but in a similar tragedy although they see the truth, they can’t affect it.

One poem which seemed to directly relate to this was the rousing chant ‘The woman the boy became’ which speaks of the woman Tiresias, a multitude of contrasts who feels and sees everything but is treated with “scorn”. In this, Kate seemed to align the roles of prophet and poet, who “see through the disguises”. Not to read too deeply but perhaps the multiple “yous” of Tiresias relate to the multiple perspectives and feelings in Kate’s poetry – with each poem showing a different identity and almost taking something from her. Several of Kate’s poems were hard-hitting about the current state of society. She told the audience that she felt like it was a dark time and that there was an undercurrent of negativity at the moment. Her poem ‘School’ speaks negatively of the way schools remove individuality, how they teach you to follow orders, to “copy blindly” and “disappear in public”. Her performance of the poem ‘Ballad of a Hero’ almost made me cry and is of a woman telling her son not to follow his Daddy and go to war, it speaks of its horrible effects and contains a very strong political message “But the men that send the armies in/Send them in for gold/Or they send them in for oil/And they tell us it’s for Britain/But the men come home like Daddy/And spend their days just drinking”. It was originally called ‘War Music (after Logue)’ which makes me wonder if Christopher Logue was an inspiration for her. He is one of my favourite poets and their poetry is very similar, as his too has a very oral, cinematic quality, with similar striking imagery and raw intensity.

One of her most powerful poems is ‘Progress’ which describes the transition of a world focused on God and religion to a more shallow society focused on needs and “all-you-can-eat Freedom”– the convenient, material and quick. As she concludes ‘Once we had the fear;/now we have the fix.’ There is definitely a pessimistic tone to her poetry, which makes it almost hard to listen to and leaves you feeling confused and a bit empty. Her solution to this and her message was to be empathetic and non-judgemental of people, to give everyone a chance despite first impressions. She told the audience of her recent epiphany that in all the material, the only thing that’s real and that matters is relations between people. Perhaps this is a message she could add to some of these darker poems, though they are more powerful for their harrowing lack of hope. It is definitely a message I will take away from the evening, and try to follow.

There were lighter moments too, with poems such as ‘Snakes in the Grass’ and ‘Some Couple’ adding comedy. Her poem ‘Man Down’ was sad but also lovely, addressed from a woman to the man she loves, telling him to stop the bravado and let himself feel “I love you. I love what you hate in yourself./It’s perfect./Let it come out.” I also loved her poem ‘These things I know’ (quoted in the title) which is full of home-truths and a mixture of humour and deep meaning – one of my favourites is “If you’ve been an arsehole today, acknowledge it./Try not to be one tomorrow.”

Perhaps the best poem of all was the one she started with, ‘Tiresias’ her epic retelling of the Tiresias myth. It takes you on a journey and articulates every moment vividly. It covers all emotions and feelings, from the agony of transition, to the passion of love, from the grief of loss to the humour of the gods. One of the most genius lines is Zeus’ reaction to Hera horrifically ripping Tiresias’ eyes out “Mate he says Ah mate.” It also ends with the title of the work and perhaps her overall message “Tiresias – you teach us/What it means: to hold your own”. To ‘hold your own’ is to be strong, stand your ground and persist. Through all the tragedy Tiresias’ witnesses, and all the lives he has lived he manages to stay strong and endure. Maybe Kate is saying that this is what humans do, which suggests that she sees Tiresias as representative of humanity itself – everyone and everything and all the tragedy and beauty it encompasses.