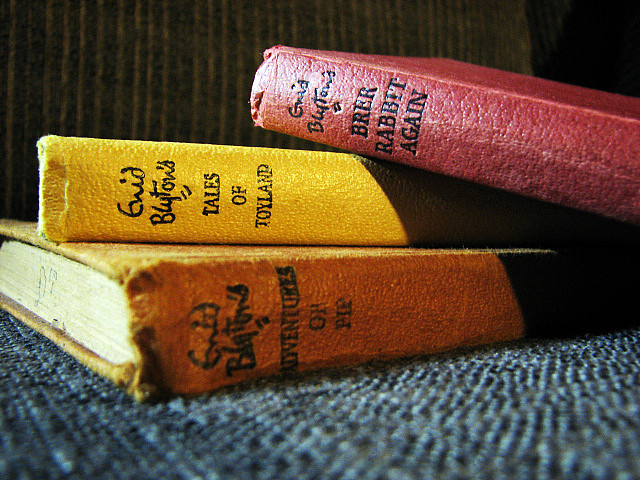 Should an author’s background affect how we view their stories?

If we’re thinking of classic children’s authors, many of us will immediately think of Enid Blyton; I certainly did. Blyton’s stories have filled childhoods across the country for decades, and with multiple successful series to her name, she is arguably a national heroine.

‘Classic’ is a key word in this discussion. Most ‘classic’ authors are from a distant period of history, and it is difficult for the modern novelist or storyteller to attain a spot in the realm of the ‘classic’ writers. Authors are increasingly attempting to branch out into unexplored territory, in an effort to create ‘original’ literature. The fantasy genre is constantly on the up: new worlds are popping up everywhere and 16-year-old heroes and heroines fighting back against an oppressive regime are becoming commonplace. But we can always rely on our friend Blyton to give us a ‘classic’ story. Though her stories are set where your childhood imagination could only dream of taking you, at the same time they are almost plausible. The Five Find-Outers in the Mysteries series solve regular mysteries in a regular place, and generally have a great time whilst doing so. Why couldn’t that be me? That’s not something I’ve ever thought about Katniss fighting to the death in The Hunger Games. But Blyton made us wish we could be a part of the fun; anyone could join in.

Personally, I have an odd relationship with Blyton’s books. Though I absolutely adore her novels, in particular The Faraway Tree series, they filled me with both a sense of ‘adventure is out there’ and ‘I will never have as much fun as these kids’. An immense sense of envy rocked me whenever I read Blyton’s works. I would beg my parents to take me to National Trust sites. They thought I was in it for the culture, I was planning on finding the Enchanted Wood. Needless to say, I never stumbled far enough, and if there were any fairies, they kept well clear of me!

I therefore forced fun into my life. The Famous Five, inevitably, led me to believe something fishy was going on at my own school. I coerced my small ‘gang’ of friends (at eight-years-old it was more of an awkward breakfast club) into believing that someone was up to something and it desperately needed investigation. I felt like George; no damsel in distress Anne over here. Some poor helpless woman had a flat in the building of my school and she was the prime suspect. The mystery that shrouded this woman drove us to pick up bits of paper on the floor and pronounce them coded when really it was just a child’s illegible scribble that they had dropped. But who knew really? We gave her a coded name we knew couldn’t be cracked and whispered randomly to each other, just to excite a giggle or a gasp. ‘What have you found out?!’ Inevitably, nothing. But we lived on in hope. I can say few other authors prompted me to threaten my up-till-then intact eight-year-old social reputation.

As a reader, I am always fascinated by backstories, and Blyton’s is a shocker. Enid Mary Blyton was born in 1897 in London, as the eldest of three. Due to a close relationship with her father, she shared his love for nature and the arts. Though, upon growing up, her manuscripts suffered rejection after rejection, Blyton was determined to succeed. Through poems and myths, Blyton’s writing developed to her most commercial successes with The Twins at St. Claire’s in 1940 and the first of the Famous Five series in 1943, right through to characters such as Noddy appearing in 1949. She was married to Major Hugh Pollock who had served in World War One. She had two daughters: Gillian, born 1931, and Imogen, born 1935.

These are the facts. Dates and certificates, however, do not tell you the full story behind a person’s life, least of all Blyton’s. In 2009, I saw a BBC TV movie called Enid. Helena Bonham Carter portrayed the Blyton I had never known. She was nasty to her daughters and both threatened and betrayed her seemingly sweet husband. From further reading, I learned her marriage was a doomed one. Her husband was a man who unfortunately suffered from alcoholism due to trauma left by the war. He had a mistress, young writer Ida Crowe. According to Crowe’s memoir, Blyton herself had many affairs, including a lesbian one with her children’s nanny and one with a surgeon in London. The latter was discovered by Pollock. In the end, it was Blyton who made to divorce him, not vice versa. Blyton additionally blocked all contact he wanted with his daughters, as well as making sure he was not able to find any work in publishing. It saddened me to learn of this part of her character, especially when the film portrayed her tea parties with her fans, which her own children were not allowed to attend, or even make an appearance at. I never knew these things about Blyton when reading about George, Julian, and co. But does this change her novels? For a child, no. For an adult looking back, of course.

We pigeonhole authors; all of us do, even without realising. Children’s authors, crime authors, romance authors, etc; it’s the same with any art. If Hugh Grant suddenly did a thriller we would think the apocalypse was beginning, likewise if One Direction start rapping. In writing, it is far rarer for a genre gap to be bridged. Blyton transcends one of the most difficult, that between children’s literature and young adult. Staying with a child as they grow up teaches the reader lessons, just as a parent or teacher would. The Faraway Tree was fun and Moon-Face was a laugh, and yes it would be great to climb to the top of a tree and find a different land every time, but that’s just not how real life works. Blyton’s novels allow us to have these fantasies, but she slowly eases us into real life too. Growing up with her works, I realised that fun could indeed be had as a normal person in a normal world. Malory Towers and the St Claire’s books proved that adventure was an attainable goal, and missing out on VIP access to the fairy kingdom doesn’t make you dreary.

So despite her questionable actions and the fact that I probably wouldn’t have liked her much should I have met her, we can’t dispute Blyton’s prowess in English literature. Of course, it’s upsetting to know she was the way she was, but who can say they are entirely without flaws. She wrote so many exquisite novels that shape children across the world, attempting to make us into sweeter and more adventurous versions of ourselves, and you can’t really argue with that. Despite my recent judgement on Blyton herself, I’ll always think of her novels fondly. For Blyton is, undoubtedly, a one-of-a-kind author.