The mythopeic setting of classical tragedy necessitates a vision of human greatness which is absent in our secular modernity: the plays ‘Waiting for Godot’ and ‘Death of a Salesman’ reflect this. Miller and Beckett both subvert the tragic genre through expressionist theatre and subject matter: ‘Death of a Salesman’ recalibrates our understanding of the tragic hero as an everyman figure, and ‘Waiting for Godot’ adopts the tragicomic mode to articulate a tragic vision in a demythologised age. There is a lack of any sense of a world populated with gods which would have been normal for classical tragedians such as Aristotle: this greater vision of divine purpose lent their tragedies a certain scope. When contrasted with the postwar setting of ‘Death of a Salesman’ and ‘Waiting for Godot’, it is easy to see why the genre and its precepts are considerably redacted to suit a society preoccupied with the mortal condition and human purpose. In light of this, modern tragedy faces an opposition between the transcendentalist, lyrical impulse to follow in the classical mode and the impossibility of executing a true tragedy in a world bereft of teleological certainty: this contradiction is played out through expressionism and elements of plastic theatre. Ultimately, tragedy does need a sense of human greatness, but I would argue that ‘human greatness’ is not denied by modern drama, but reframed within a background of cosmic indifference which only amplifies the hero’s tragic nobility, even if it is simultaneously presented as futile.

These two plays, according to Steiner, do not qualify as tragedies at all, since fate (as an inevitable force encroaching upon the protagonist) is not explicitly acknowledged. According to his paper ‘The Death of Tragedy’, no post-Christian drama, including Shakespeare, is truly a ‘tragedy’: the motif of suffering as a means of redemption justifies the ending, whereas the tradition of Greek drama lacks any form of mitigating factor. This does problematise any reading of the plays as ‘tragic’, especially when considering that neither play has a proper anagnorisis: neither Willy Loman, Vladimir nor Estragon are granted that structurally climactic moment of epiphany which prefigures a tragic reversal of fate. Instead, both playwrights choose to use the structure of their play to convolute our comprehension of the tragic hero. The end of Act 1 in ‘Waiting for Godot’ where the dialogue ‘let’s go’ contrasted with the stage directions ‘They do not move’ illustrates the lack of finality or clarity within the play’s action. Similarly, in ‘Death of a Salesman’, the ‘Requiem’, ostensibly a moment of complete finality – a funeral – is undermined by Linda and Biff. The final scene resonates with bathos: the actual requiem can be read as a perpetuation of the charade Willy lived, albeit undermined by Biff’s didactic remark ‘He had the wrong dreams. All, all, wrong’. Willy is exposed, here, to be a misguided man whose real tragedy was in misrecognising his dream. 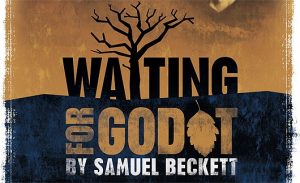 Even Linda becomes a voice of opposition: her final words ‘We’re free. We’re free…We’re free…’ is subversive; literally, free of destructive dreams and from debt, yet ironically, far from free: Willy’s only proper sale is his own life, a truly tragic reality for his family – the anonymity of the twentieth century is an active force in compelling his suicide, confirming the corporate outlook that humans are valued for their work capacity and nothing more. This is diametrically opposed to any sense of ‘human greatness’ which one might expect in a tragic hero, and the protagonists in both dramas have this need for validation which is denied them; shaping their humanity. Beckett and Miller have their protagonists fixating on a point of futurity to legitimate their existences, and to propel the narrative drive of the dramas. For Vladimir and Estragon, Godot represents ‘a transcendent principle […] which they feel will give meaning to their lives and their speech, thereby legitimating their society.’ The deliberate ambiguity surrounding Godot, his arrival and his importance serve to enhance his allure and prevent the duo from giving up. The American Dream functions symbolically in the same way for Willy. He is portrayed as a man psychologically trapped in the commercial American dream – led astray from his untapped longing to be with nature: this is made all the more tragic when we glimpse Willy’s alternative dream of self-sufficiency: ‘You wait, kid, before it’s all over we’re gonna get a little place out in the country, and I’ll raise some vegetables and a couple of chickens’. The glimpse of a simple, pastoral life promotes nature as a source of refuge. In ‘Waiting for Godot’, nature – represented through the tree – is a focal point, but much less stable than the pastoral idyll in ‘Death of a Salesman’. Despite its presence on stage as one of three main features, the tree destabilises the audience when it grows leaves in Act 2; even the solidity of a key prop is complicated. Alongside Pozzo’s blindness and Lucky’s dumbness, the new events ‘underline the relentless onward march of time.’ The overarching anticipation, yet fear, of future events in both texts evokes a sense of holding something at bay: this echoes the classical tragedy’s preoccupation with inevitability of fate.