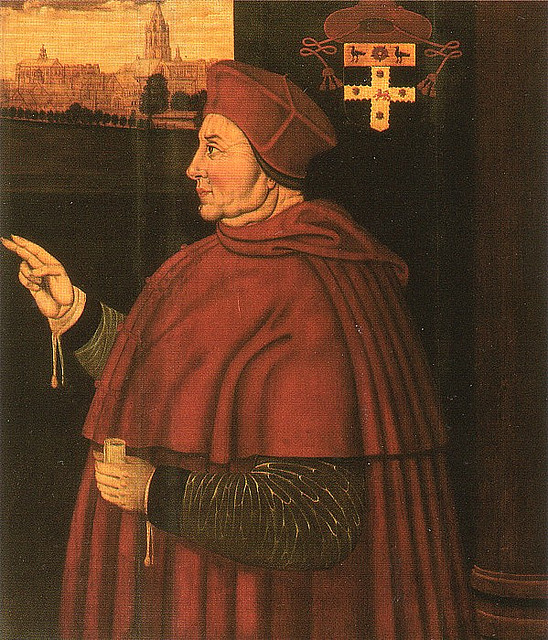 Earlier this week, David Starkey (professor, maverick, all-round offender of political-correctness) slammed Wolf Hall for being a “deliberate perversion” of history’s facts. But as far as I can tell, the only thing ‘perverted’, deliberately or otherwise, by Peter Kosminsky’s directing are the perceptions that people all too often have of the Tudors. Episode two of the BBC drama began in 1529 and, by this point, Henry VIII had been on the throne for twenty years. He had conquered both the French and Scots in battle and was well into his search for a male heir, only to end up with a long-suffering daughter. Yet, this week was the first time that we really got any insight into Damian Lewis’ adaptation of the King. He was neither fat nor odious, and nor was he the serial wife-murderer that he is all too frequently associated with. This Henry, in 1529, was astute, aware and, if I may say so, attractive. And that was the fact.

What I particularly liked about this week’s episode was the emerging dualities and complexities of the characters. So whilst Henry exudes an allure that proved why he escaped bachelorhood, he also imparts vulnerability, anxious that Anne Boleyn will trade him in. This is important because it demonstrates that the King was never omnipotent, but reliant on his ministers. These relationships of mutual dependency became increasingly clear as the episode progressed, firstly with Wolsey but most notably with Cromwell. If last week saw the emergence of Cromwell, in this episode he really ascended to power.

Cromwell thinks himself a favourite, aspires to be a favourite but also proves his potential to be a favourite. Whilst ‘Wolf Hall’ alludes to his insatiable hunger for influence over the King, he is not portrayed as a monotonously megalomaniacal figure. Gardiner’s incessant mocking over his background sees to this. So whilst Cromwell treads on eggshells around the King, he strides over them with confidence in his own capabilities as a lawyer and politician. We, the audience, and the King alike are persuaded of his immense intellect. I sat with bated breath as I watched Cromwell interpret Henry’s dream to derive an answer favourable to himself and desirable to the King. ‘Wolf Hall’ succeeds in proving that Cromwell was not always the Machiavellian master manipulator by positioning him as a confidante and consultant. I’m not sure whether the sources corroborate his tendency for sister-seducing (firstly of his wife’s sister and secondly of Anne Boleyn’s), but ‘Wolf Hall’ certainly shows Cromwell’s sway over the people that matter in Tudor politics.

The obvious exception to this is still Cromwell’s relationship with his son; they reminisce about the Christmas pageant in the village, which takes on a poignant irony by the end as Cromwell hints towards the dissolution of the monasteries and the displacement of Catholicism to Protestantism and ultimately Puritanism in England. It is great to see ‘Wolf Hall’ respecting contemporary disputes: in the stakes of controversy, Tyndale almost represents the Starkey of his day. Although Cromwell is adamant that the vernacular translation of the Bible is not seditious, he is refuted with possibly the greatest post-watershed response ever televised: ‘Luther is shit. His mouth is the anus of the world’. Crude, but undeniably reflective of how divisive religion was even before the Reformation.

‘Wolf Hall’ certainly doesn’t shy away from bringing up contemporary issues. Indeed, Catholicism is dealt another blow by the accusation and acknowledgement of Cardinal Wolsey’s absenteeism. Exiled back to his see, Wolsey proudly declares himself the Archbishop of York and he is undercut by Cromwell reminding him that he had ‘never been’. Like it is now, London then was the place to be.

In part, Cromwell derides Wolsey’s departure because he is going to the north. Us Durham students have learnt to love the north, not least because of its cultural output: Greggs! Interestingly, a bakery in Kew have been selling custard tarts using a Tudor recipe, which rumour has it Anne Boleyn enchanted Henry with. As an adopted northern dweller, I took offence when Cromwell insulted the blandness of northern food (clearly anticipating college food!) but this highlighted the interdependence of food and politics, in that decisions and debates occured around the table. Even with a chimp on the table, dining had a ceremonial factor; dining with the King was the privilege of the favourites.

It was somewhat inevitable that this episode would see the demise of Wolsey; even when he was arrested for high treason, there was still a part of me that was rooting for his escape. Even though Wolsey was clearly loathed in court and by the public by this point, ‘Wolf Hall’ maintains him sympathetically, unwavering in his loyalty to the King even on his deathbed. This does not mean that we come to glorify Wolsey, quite the opposite: Rylance’s age enables him to portray the Cardinal with vulnerability. Ten years senior to Wolsey – aged 57 in 1529 – Rylance’s Wolsey is simply a man drained and defeated by the volatile Henrician court. In this episode, Wolsey has predominantly been attired in his stately red robes; we then hear of his coffin of plain boards. This starkly reveals just how far he had fallen, in direct contrast to Cromwell on the rise, with scenes of death intermitted with Cromwell being sworn into the Privy Council.

This week’s episode was another great one from ‘Wolf Hall’ and that, Mr Starkey, is certainly a fact! I can’t wait to see how Cromwell deals with his new ministry next week, now that Wolsey has gone.