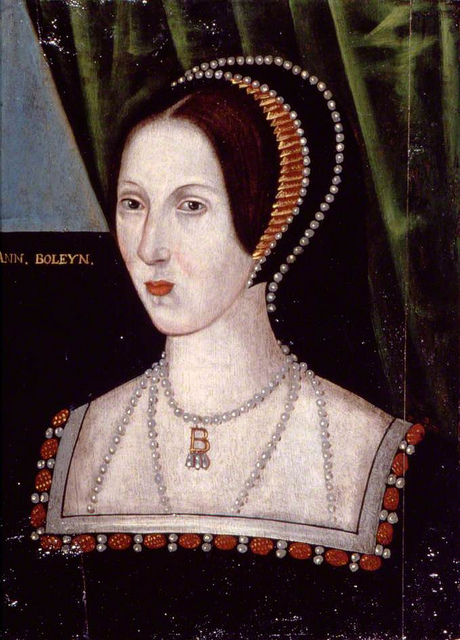 1536: Anne Boleyn’s last year and the setting for the last episode of series one of the BBC’s historical drama ‘Wolf Hall’. We are told initially that Henry’s love for Anne has been displaced by anger and distrust; I thus expected a somewhat volatile and dramatic performance in this series finale, and this is exactly what director Peter Kosminsky gave us. Political manoeuvres were doled out down to the very end of the episode and to the death of Anne.

The most significant aspect of this episode was that it did not feature Jane Seymour at all – an interpretation which attributes Anne’s demise solely to the Queen, rather than Henry’s wandering lust. Indeed, it is Anne’s own wantonness which was the central subject of this episode; attacked with allegations and accusations of incest and adultery and her fate, if the viewer was somehow not already aware of it, is sealed from the outset. The slouching, tooth-picking Damian Lewis (playing Henry) is a far, far cry from the besotted flatterer of three weeks ago.

Essentially, Anne is not only the focus for gossip, but of factionalism. The Poles, Exeters and Montagues all stand opposed to her family and the Protestantism that they stand for. Hence Anne is not only victim to political power conflicts, but is prey to Henry’s prevailing conservatism. Protestantism, it is implied, was expedient for an heir; an heir which Anne clearly did not beget. She condemns Cromwell for giving priority to Princess Mary’s safety above her’s and her daughter’s when he believed the king to have died in last week’s episode.

So Anne this week is demonstrably vocal, but she also suffers from a severe case of egocentrism. She makes poor Mark Smeaton cry by reminding him what an inferior person he is. At this point, even Anne’s chamber, her most intimate ladies-in-waiting, are against her. ‘Wolf Hall’ successfully isolated Anne as a character, but more importantly, for the sake of justifying her execution, as a criminal.

Primarily, Anne is charged with committing incest with her brother George. If it wasn’t already outrageous enough, this is presented as part of a political tactic – a baby borne by him would “look like a Boleyn” and hence be precluded from being named a bastard. So her incest is above all a cover up for her adultery with prime suspect and suitor, Smeaton.

Where does all of this leave Cromwell? He is firmly on Henry’s side, firmly aware that “those who have been made can be un-made”. But although these words are Anne’s, Cromwell’s prosecution against her proves once and for all that his maker is solely the King. Cromwell surprises the audience in the torture scene with Smeaton as he demonstrates a malicious streak. But the sympathy in him is far from allayed, for his heartlessness is temporary and only a facade at that. He won’t allow Mark to be hurt, but he will have him locked away for the night despite his protestations while Cromwell sleeps. This all serves to give real conviction to Cromwell’s assertion to Anne that even if she did make him, he made her too.

And having engineered and presided over her trial, Cromwell is the one to break Anne too. Her chamber is stripped bare of its luxuries and we see her transported, accompanied by Cromwell, by boat. This is sad because right until the last, Anne resists her fate, believing that her estranged husband is testing her. Although her relations with Cromwell have been strained and bitter throughout the series, she hopes that even if no one else does, he doesn’t believe the rumours alleged against her. ‘Wolf Hall’ has so heavily relied on dialogue to convey its political turns, but here, Cromwell’s silence spoke volumes.

If the audience is left with one impression of Cromwell, it is above all that he is shrewd. Far more so than Wolsey and far more effectively than the King, Cromwell is portrayed to be somewhat of a political mastermind; he tricks George into decrying Henry’s ‘vigour’, at which point his guilt is confirmed. If he was shocked by the trickery of it, the audience is undoubtedly surprised by the crudeness of it: the Tudor court was brutal.

You might expect an execution scene to be over-dramatised or unbelievably sinister. If you were hoping for a ‘Horrible Histories’-style ‘stupid deaths’ performance, Anne’s beheading would have disappointed. But it was artistic and emotional, right from the ladies removing Anne’s black headdress, to Cromwell whispering for her to pull her arm down. I was personally surprised, as I think was Cromwell, that the execution would not take place on a block- so a sword was literally flung at poor Claire Foy’s head. The gathered audience were aghast almost as much as the television audience and this final scene located the execution in its historically significant location. Executions may have been aplenty in the Tudor period and it was a punishment that did double as a form of entertainment. But the case of executing a queen for heresy was somewhat unprecedented, and like the rest of the King’s “Great Matter”, highly unconventional. This was a turning point, brilliantly consolidated by ‘Wolf Hall’ into a series finale. Anne Boleyn’s fall definitely made far better television than Madonna’s fall during the Brit Awards!

From start to finish, it’s been no secret that I’ve loved this historical drama. Despite criticisms of it being inaccurate and dull, I think that it has dramatised a really well-known event with sensitivity and subtle brilliance, and brought some unknown facts and characters to the fore too. The acting has been superb and this was perfectly encapsulated in the final scene, where Henry greets Cromwell with what can only be described as a bear-hug, which Cromwell returns extremely unwillingly. He is set to turn against the King and be turned against in return, but unfortunately (or fortunately?) we shall have to wait for series two to see his demise.