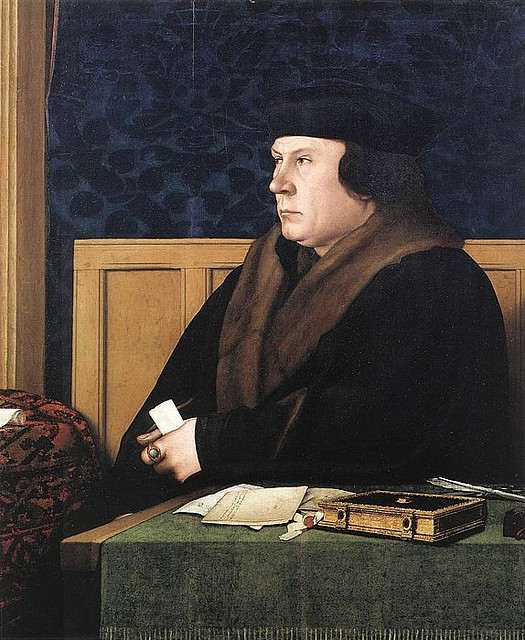 This week, ‘Wolf Hall’ has been encumbered with criticism for being confusing, slow and dull. However, in the fourth installment of the King’s pursuit for an heir and Cromwell’s enterprise against More, the year 1533 was far from drab. The long-awaited baby has been born, but as the audience knows all too well, it is a girl. The only consolation is her health. This news is personally distasteful to the King, but moreover it is a dynastic disaster and in the same breath as Henry names the child ‘Elizabeth’, he cancels the jousts. England was all too prepared for jubilation and it is with such irony that this burdensome baby will later become one of England’s finest monarchs and a foremost queen. Inevitably, the question of succession was paramount in this episode and whilst it is a concern for Cromwell, it is a grievance for Anne Boleyn, for her political legacy and power depends on the recognition of her daughter’s legitimacy and entitlement above that of the not-so-princess-anymore Mary.

Before this episode, I was well aware that Mary was marginalised by her father and her particularly wicked stepmother, which only reinforced her loyalty to her mother and to Catholicism. But I didn’t know that she was also forced into the baby Elizabeth’s household, not as a member, but as a servant; according to Anne, “there can be no pretence of equality”. This theme continues and is demonstrated as forming Anne’s protest against the proposed succession bill on the grounds that it doesn’t explicitly refer to Mary’s bastardly nature. In this issue of legality, Cromwell’s expertise prevails.

But in the legal case against More for treason, Cromwell is very much repudiated and subdued by Henry. The latter only keeps his minion because he is “a serpent”; Cromwell’s power depends on his execution of the King’s will. In this instance, Cromwell is not humiliated, certainly not as much as More will soon be, but he is humbled. He is not the same vulnerable novice as we saw three weeks ago, or rather 5 years ago, and his reminiscences of serving More as a teenager don’t exact the same sympathy from us as did his visions of being beaten by his father. With power, Cromwell has changed, but he has not hardened. The woman that he loves is married but it is irrelevant and irrespective if he cannot get More to swear the oath attesting to Henry’s control of the English church.

Here emerges a distinction between the perception of Cromwell’s power and the existence of it in reality. More’s wife, Lady Alice, believes that her family rest at Cromwell’s mercy, that the lawyer could be “sitting on a cushion with jailers owing him money” if only he was thrown in a dungeon. This scenario is very different from More’s, whose papers and pens are confiscated, but it’s also a far cry from Cromwell’s actual political capacities. If Cromwell were King, he makes it plain that we would leave More to repent; we see new ambitions in Cromwell, but this goal is clearly not the case. More refuses to swear the oath and believes that the pledge of Richard Rich, Solicitor General, is not “worth a devil’s fart”. The political and religious implications of treason render him guilty and subject to execution. Notably, More in this episode – and in fact – was beheaded; but for treason, he should have been humiliated with being hung, drawn and quartered. Perhaps it’s a case of the King going soft, but I think it is more (pun unintentional) to give reality to the exposition that he was less likely than Anne to skin traitors alive. (Except of course if you’re Anne Boleyn or Catherine Howard)

In this episode more than any ever, Anne should be the recipient of the audience’s sympathy. If bearing a daughter wasn’t unfortunate enough, her resolution to “give the King a son and I won’t die” is heroic, and slightly heartbreaking. Following her husband’s confidence that “England is ours”, her miscarriage is just plain wistful. Yet at no point did I feel sorry for Anne; she was just so heinously self-righteous. Accusations of adultery aside, she demonstrated less the proto-feminist feminist that Kosminsky aimed for, than a plain nasty woman crusading against More.

Between births and executions, man-hugs and bitch fights, laws and arrests, I defy anyone to say that ‘Wolf Hall’ is boring! This week was exciting and with a five-day pit stop at ‘Wolf Hall’ itself on the itinerary for the next episode, it can only get better from here. (Except if you’re Anne Boleyn, with only one year left to live…).