National Museums Scotland have recently acquired a trio of exceptionally rare silver objects created in Scotland in the 1600s. The quaich, trumpet bell and mazer are important examples of 17th century Scottish craftsmanship and have been donated to the National Collections by Ron and Rosemary Haggarty. National Museums Scotland is one of the leading museum groups in the UK and Europe looking after collections of national and international importance. The organisation provides loans, partnerships, research, and training in Scotland and internationally

The silver quaich is an item of 17th century luxury, elaborately engraved with tulips and exotic birds. It is one ofthe finest remaining pieces by skilled Aberdeen goldsmith William Scott and its diminutive size suggests that it was used for beverages such as whisky or sherry. 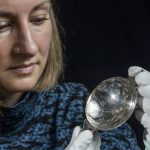 Free to use images.
Issued by National Museums Scotland.
Pictured is curator Lyndsay McGill with the silver objects.

The Bell of Cowcaddens Mazer is the earliest of the three silver items, made in Edinburgh c.1613-15. Mazers were also once popular communal drinking vessels but only nine Scottish examples are known to survive and just two made entirely from silver. The Cowcaddens Mazer was owned by the Provost of Glasgow and would have been passed from person to person to secure bonds of friendship and political alliances.

Once mistakenly identified as the neck of a silver vase, the silver trumpet bell is now known to be the only surviving section of a long ceremonial trumpet. This particular example is engraved with the coat of arms of the Cassillis family from Ayrshire and would have been used during state and civic rituals. It is one of just three Scottish trumpets from the 1600s still in existence.

“Scottish marked silver from the 1600s is scarce, especially examples of this quality. These objects are hugely significant, representing the capability and skill of Scottish silversmiths and revealing more about a fascinating period in Scottish history. We are delighted to accept this gift and thank both Rosemary Haggarty and her late husband Ron for their remarkable contribution to the National Collections.”

On long-term loan to National Museums Scotland since 2004, individual objects from this outstanding collection of Scottish silver have featured in exhibitions, publications, lectures, and workshops. Now secured for the nation through this generous gift, it will be possible to conduct more research into their intriguing design and ownership.